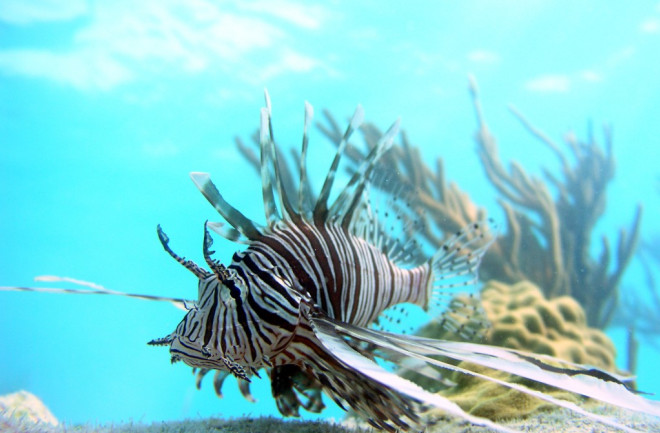 An invasive lionfish in the Bahamas. Photo by Mark Albins. The lionfish eating their way through the Atlantic and Caribbean are among the worst marine invasive species to date. Anything we can do to limit their populations is a step in the right direction, thus it's not surprising that some are getting creative when it comes to control. One of the most common questions I receive goes like this: What if there's something worthwhile in their venom? Could we convince people to hunt them in droves if we can find a medical use for their spines? It sure sounds like a perfect plan: study lionfish venom, find medically-relevant compound, and harvest millions of invasive lionfish to extract it. If only it were that simple. As I explained through the incredible story of Ellie Lobel, the pharmaceutical potential of venoms is vast and nearly untapped. Scientists are beginning to understand the diversity of compounds that venomous animals use to capture prey, digest food, and defend themselves, and we're only just starting to understand how millions of years of evolution have honed them into precise chemical weapons. So it's not that far-fetched to think that lionfish could be hiding a blockbuster drug in their spines. Indeed, preliminary research suggests such compounds may be there. But even if lionfish do have the next game-changing pharmaceutical in their venom, it's not going to lead to any sort of removal efforts. Lionfish are not the only animals with powerful potential. But unlike lionfish, many venomous species are fighting for survival. They're on the brink of extinction, clinging onto what little of their habitat remains. If these species, instead, are hiding a pharmaceutical gold mine, what will become of them? The good news for more fragile venomous species (and the bad news when it comes to lionfish control) is that the pharmaceutical industry is unlikely to cause much of an impact on a species - at least not through bioprospecting and drug discovery. Yes, damage might be done during the initial collection process - any time people travel into habitats, they're going to cause some disturbance - but that's it, because of one simple fact: the process of patenting, testing, and getting a drug to market is expensive and arduous. No company is going to jump through all of those hoops unless they can synthesize the drug cheaply and effectively.

To date, six venom-based pharmaceuticals have been approved by the FDA. All were inspired by natural compounds, but there isn't one that is still extracted from crude venom. For better or worse, drug companies want to make money. Extracting single compounds from the complex cocktail of venom ingredients is difficult, time consuming, and most importantly expensive. Too expensive, in fact - it simply doesn't make financial sense for BigPharma to pay so much to get a drug through clinical trials and onto the market when it'll cost thousands of dollars per dose just to break even. So while there may be great medicines to be found in the slurry of compounds that constitute lionfish venom, their presence isn't going to help fight the invasion currently underway. Our best bet is still the eat 'em to beat 'em strategy - and for the record, they're delicious.