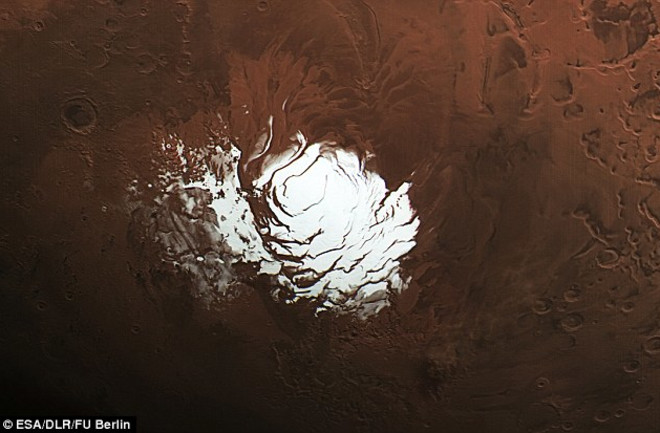 Astronomers have discovered a large underground lake of liquid water lurking just below the surface of Mars. The find could end a more than century-long debate over whether or not the Red Planet still has liquid water. The newfound lake stretches some 12 miles from end-to-end, and was discovered using a radar instrument called MARSIS on board the European Space Agency’s Mars Express spacecraft, which first reached Mars nearly 15 years ago. The results were published Wednesday in the journal Science.

“This is just one small study area,” says study author Roberto Orosei, who’s also principal investigator of the MARSIS experiment. “It is an exciting prospect to think there could be more of these underground pockets of water elsewhere, yet to be discovered.”

Scientists found the lake by launching radar pulses from the orbiter to penetrate the surface and reflect back, revealing secrets from just below the surface. It was discovered as they surveyed the Planum Australe region near Mars’ southern ice cap, which is made of water ice covered by frozen carbon dioxide. Between 2012 and 2015, the team obtained 29 radar samples and used them to map the subsurface nearly one mile deep in the area and about a dozen miles wide.

“We’d seen hints of interesting subsurface features for years, but we couldn’t reproduce the result from orbit to orbit,” says study co-author Andrea Cicchetti, who’s also on the MARSIS team. She says data resolution in the past was just too low.

But the team found a new way to operate the instrument that avoids processing data on the aging spacecraft and instead sends observations to Earth, allowing a higher sampling rate. The discovery is especially intriguing because underground lakes like this are also found near Earth’s poles, particularly in Greenland and Antarctica.

And in recent years, scientists actually drilled deep beneath the Antarctic ice into one of these, the subglacial Lake Whillans, which had been cut off from the surface for millions of years. They found bacteria still living there in complete isolation. Scientists have also traveled deep underground into mines and found microorganisms related to ancient species that once lived in watery environments much closer to the surface. Such migrations raise the possibility of the same thing happening on Mars — as the water retreated, life moved deeper underground.

However, while the find is tantalizing for astrobiologists eager to find alien life, it’s also a bit of a tease. It will be decades before astronauts can visit the surface of Mars, and likely much longer before we can drill a mile beneath the dusty surface. So we may not see any Martian fishing expeditions in our lifetime.