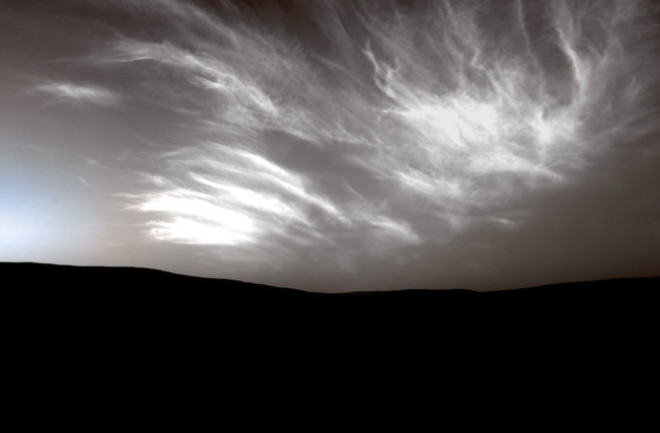 These clouds snapped by the Curiosity rover on Mars are much lower and thicker than the meteor-generated clouds the study looked at. (Credit: NASA/JPL-Caltech/Justin Cowart)

No matter what planet you’re on, physics remains the same. For clouds, that means they follow a peculiar law – they form only around a seed of some sort, usually a fleck of dust or salt. On Earth, with its thick atmosphere and strong air currents, it’s possible to find these lightweight particles throughout the atmosphere, forming clouds at all different altitudes.

On Mars, this process is more difficult. Scientists have struggled to understand the high-altitude clouds they routinely see in Mars’ skies, since models predict that it’s difficult to lift even Mars’ prolific dust high enough into the atmosphere to form the clouds.

But recent observations from NASA’s MAVEN spacecraft, combined with modeling from a group of researchers led by Victoria Hartwick, a graduate student at the University of Colorado, Boulder, may have cracked the case. They say that meteors crashing into Mars’ atmosphere and shredding into dust, which they call “meteoric smoke” can provide the required seeds to form high-altitude clouds. Hartwick’s team published their results Monday in Nature Geoscience.

“We’re used to thinking about these planets as self-contained bodies,” says Hartwick, where each world’s own climate and weather come from within. “But this is an example of the climate being impacted by its solar system environment.”

Making clouds from meteor dust isn’t unheard of. Meteors are thought to be the seeds for some of Earth’s wispy noctilucent clouds, but even this is a relatively recent discovery.

Hartwick’s work is mostly based on modeling. Previously, it was difficult to recreate with computers the clouds that spacecraft have observed in the Red Planet’s middle and upper atmosphere. But with the addition of the meteor particles to the models, the matches were much closer.

The theory is strengthened by results from the MAVEN mission. In 2017, the spacecraft observed ionized metal particles in Mars’ upper atmosphere. Researchers see this as proof that meteors entering Martian skies are being heated and evaporating into tiny particles.

This is a common process on Earth, where as much as 100 tons of meteoric material rains down every day. Mars gets a relative trickle, no more than 3 tons, and less than half a ton is converted into the fine particles that might serve as cloud seeds. “That’s about the same amount as a lion or a harbor seal being distributed across the planet per day,” says Hartwick. But even that smaller amount still comprises billions of individual particles, which have a noticeable cumulative effect.

While the evidence is somewhat indirect, the modeling combined with MAVEN’s findings is as much proof as researchers are likely to get. “On Earth we were able to discover [cloud seeds] by flying through the material and capturing meteoric smoke. It’s very difficult to do that on Mars.”

As far as the clouds’ impact, they’re thin and often barely visible. But Hartwick says they can still affect the middle atmosphere, where the temperature can fluctuate by 10 degrees a few times over the course of the day, with the clouds’ formation and dissipation being part of the temperature cycle.

But Hartwick points out that ancient Mars would have had much heavier rains of meteors. “When you rewind the clock, this could have a bigger impact on the formation of clouds on the early climate.”