Like a scene out of Little Shop of Horrors, the dodder plant hunts its victims by sniffing the air. 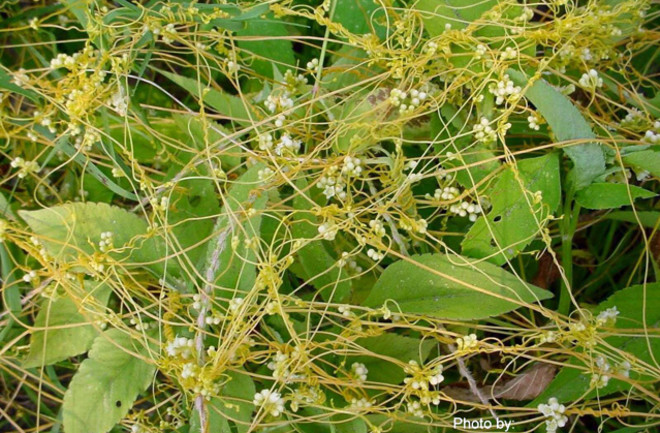 It's not the killer plant from "Little Shop of Horrors," it's real, and it doesn't wait around to be fed. Researchers have discovered that a predatory weed has a creepy trick—it hunts down victims by their smell.

"Dodder is a parasitic plant. Many people have seen them because they look like a spaghetti mess, and you see them in yards and field and crop systems," says Penn State chemical ecologist Consuelo De Moraes. The dodder weed looks stringy and small, but for the California tomato crop alone, dodder causes more than $4 million of damage a year according to researchers at the University of California, Davis.

"Dodder is a very difficult pest to control," De Moraes says. "It attaches to the host plant, and it makes it very hard to kill the weed plant without killing the host."

"There are really no reliable ways to control this weed, short of using a flamethrower," fellow researcher Justin Runyon says. Dodder can reduce agricultural productivity and can render a seed crop unmarketable since it's hard to separate it from its host plant.

The researchers studied how the weed finds its prey. As they published in the journal "Science," they found that dodder doesn't just grow randomly until it finds a host plant—the weed can actually make choices, growing toward tomato plants over wheat 80 percent of the time. "If you give wheat to [dodder] but not anything else, they will grow towards wheat, because it's better to have something than nothing," De Moraes says. "If they have an option between tomato and wheat, they will grow towards the tomato."

"Here we have a plant that's moving, it's acting, it's searching for a prey, you could say, much the same way as we think animals do," Runyon says.

While the dodder weed doesn't have a nose, De Moraes theorizes that the weed has special receptors that can detect scent chemicals.

But dodder's sniffing skills can be turned against it. The researchers isolated a chemical in wheat that repels dodder. This could lead to new ways of fighting the weed. "So some of the findings from this study can generate some new ideas how to deal with these pest species," De Moraes says.