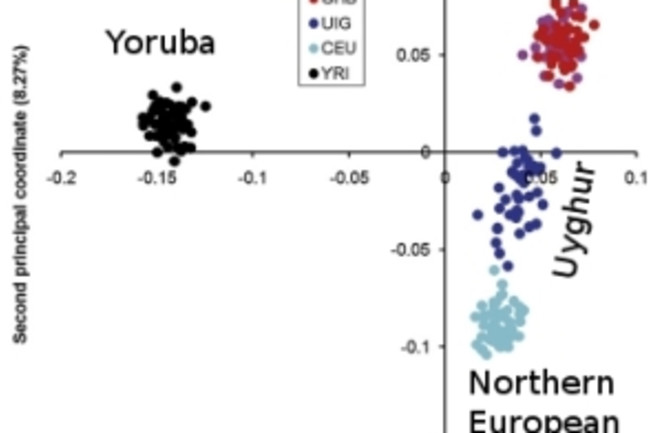 Another paper is out which falls under the category of using genetics to understand human history; Analysis of Genomic Admixture in Uyghur and Its Implication in Mapping Strategy:

The rationale for these sorts of admixture studies is medical; you need to know the genetic background of a population to make sure that you don’t infer spurious assocations due to population substructure. Imagine that you have a study group and allele B on gene 1 is strongly associated with a higher incidence of disease X. This is important information which is going to be relevant for targeting and treatment. But what if you find out later that your study group consisted of two historically distinct populations, and allele B is only found in one of these. Additionally, within this population allele B is not associated with disease X. One can infer then that the original finding was simply due to the population substructure, and the correlation between allele B and disease X was due to the higher frequency of both these characters within a population as opposed to any causal relationship. Sometimes the substructure is going to be cryptic, and in other cases researchers need to be clear about the level of granularity necessary for any particular question.

That’s all great; I love medicine as much as the next person. But what does this tell us abut human history? First, note that the samples in this study were collected from Khotan, an ancient city along the southern edge of the Tarim Basin in Xinjiang. The authors of this study note that it was imperative to obtain samples from these southern Uyghur populations because they are likely to exhibit the least recent admixture from Han Chinese populations. Personally, I suspect that these recent exogenous genetic signatures in northern Xinjiang populations are likely to be from intermarriage with the Hui, ethnic Chinese speaking Muslims who are called Dungans in Central Asia. In any case, before Khotan was Uyghur, it was Tocharian, and this region of Central Asia produced the famous Tarim mummies. As you likely know the mummies were described as being surprisingly European in appearance. Why surprising? Well, it is Asia, and in Asia people look “Asian,” which generally excludes individuals with blonde hair and blue eyes. I think it is important to move beyond the constraint and shock of labels. Terms like “Europe” and “Asia” are rather ill-defined, and their boundaries tend to shift with the geopolitical winds. For example, Peter the Great of Russia famously lobbied cartographers to place the official boundary of Europe at the Urals. During the previous centuries propagandists in the service of Poland-Lithuania depicted Russia as outpost of Asiatic Tartary. But long before the modern era people that looked “European” (read: white) have been resident outside of the geographical continent of Europe, taking advantage of steppe highways of Inner Asia (in other words, all people who lived in Europe might have looked European, but all people who looked European did not live in Europe). Or have they always? I have a suspicion that the rise of agriculture and nomadism changed things when it came to long distance travel, making it relatively more common than it had been in the period before the past 10,000 years. I have posted before why I think the Uyghurs’ genetic profile suggests a very particular shape to the past which excludes some scenarios. In this paper the authors indicate that the genesis of the Uyghurs lay within the past few thousand years. The relatively low within population variance in ancestral components and the extent of linkage disequilibrium places a limit in how recently the hybridization event occurred. Recombination has had enough time to chop up ancestrally specific genomic regions while many generations of random mating have distributed the disparate ancestries across all lineages. But what about the upper boundary of the origin of the Uyghurs? The authors state:

…However, this result could be underestimated due to the assumption of a hybrid isolation (HI) model. In this model, we assumed that Uyghur was formed by a single event of admixture during a short period of time, which might not be true of the real history of the Uyghur. Considering the geographical location where the Uyghur settled, continuous gene flow from populations of European and Asian descent was very likely….

On a priori grounds I too consider continuous gene flow likely. But I’m not sure so at this point, and the reason is one specific gene, SLC24A5, which is the second in rank among ancestry-informative markers. This is because the variant of SLC24A5 found in Europeans is rarely found in people of African or East Asian ancestry. The European variant is also the derived one; that is, relatively recently in evolutionary history a mutant polymorphism was subject to a powerful selective event which swept through European (and West and South Asian) populations. Recent work implies that the sweep might have occurred as recent as 6,000 years before the present (or as early as 20,000 years ago).

What does that have to do with Uyghurs? If Uyghurs, or their ancestors, were mediators for gene flow from east to west and vice versa for thousands of years why is it that East and West Eurasians have different genetic profiles for the loci recently selected for skin color? Strongly selected alleles should sweep across populationsassuming even minimal levels of gene flow. SLC24A5‘s derived variant has swept as far as Sri Lanka. The fact that it isn’t extant at appreciable frequencies in East Asia suggests to me that Uyghurs did not serve as a mediator population between the east and west. Rather, Uyghurs may very well be one of those populations where the hybrid-isolation model is actually a rather good approximation of reality. Here is what I believe might have occurred. Prior to the emergence of nomadism and various forms of irrigation agriculture Xinjiang was extremley lightly populated. So thin were humans on the ground that Central Asia served as a gene flow barrier between east and west Eurasia. With the development of new cultural technologies in western Eurasia, from the horse to the wheel, Xinjiang came to be settled by peoples from the west. This explains why 4,000 years ago blondes were relatively common in Xinjiang despite its Asian location. Around 2,000 years ago a reverse historical process occurred, the migration of Turkic peoples to the west from their Mongolian urheimat. In some places the migration’s genetic impact was minimal; e.g., Turkey. But in Xinjiang, which is close to the original Turkic homeland, the cultural change was accompanied by a demographic shift as East Asian genes nearly approached parity with the indigenous genetic substrate. The genetic inferences derivable from the above paper are interesting, but not revolutionary. They don’t overturn our understanding of the history of Xinjiang, rather, they supplement, clarify and quantitize the picture. Similarly, we knew that there was some non-European admixture within the white Argentine population, but now we have a better sense of the extent of that admixture. In a chain of inferences the ability to relate elements of an argument or concept quantitatively is essential to prevent inaccurate projections. Via Dienekes.