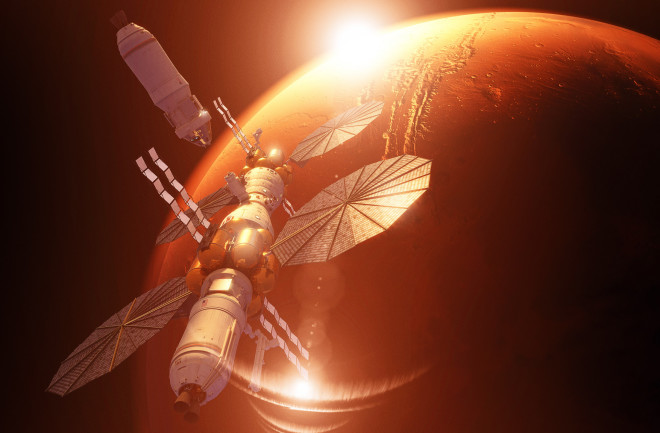 Lockheed Martin’s concept, called Mars Base Camp, would need a way to replenish their fuel and air supplies. (Credit: Lockheed Martin) Spaceflight is like backpacking. If you can’t restock supplies like food and water along the way, how far you can travel is limited by how much you can carry. And in space, you also have to worry about having enough fuel for your spacecraft and breathable air for your crew. That’s why some researchers are looking toward technology that they call artificial photosynthesis -- a way of harnessing the sun's light to generate fuel and breathable air for longer missions. This system would mimic, in a sense, the way plants perform natural photosynthesis by converting light energy into chemical energy and producing oxygen in the process. Research published Tuesday in Nature Communications brings us one step closer to this goal. For the first time, researchers performed photoelectrochemical experiments — chemical reactions that use light and the electrical properties of chemicals — in an outer space-like microgravity environment. Currently, the International Space Station (ISS) has systems in place that split water into hydrogen and oxygen, which astronauts breathe in. The ISS also makes water and methane from the carbon dioxide that astronauts breathe out. The systems aren’t the most efficient, but they work fine for the space station, which is in constant orbit just a couple hundred miles from Earth’s surface where it receives regular shipments of fuel and other supplies from Earth. But a more distant space mission, like an outpost orbiting the Moon or a journey to Mars, can’t rely on frequent care packages from home.

Experiments placed in a drop casule and dropped down the Bremen Drop Tower can experience 9.3 seconds of microgravity conditions. (Credit: Katharina Brinkert)

Caltech chemist Katharina Brinkert wants to tackle this challenge. So she and her collaborators devised an experiment to make light-powered, fuel-producing chemical reactions happen inside Germany's Bremen Drop Tower. The drop tower gives scientists just 9.3 seconds of microgravity. Brinkert wasn’t sure if their experiment would actually work in that little time. “Doing electrochemistry is already difficult,” Brinkert says. “Doing it [...] in 9.3 seconds is even more difficult.” Happily, the experiments were a success, and Brinkert and the team were able to produce hydrogen gas — a valuable fuel source — from a water-based acid solution. They even demonstrated a solution to a problem the ISS’s water-splitter sometimes suffers. Because buoyancy needs gravity to work, gas bubbles formed in the microgravity water-splitter tend to stick to the solid surfaces of its electrodes rather than rise to the surface of the water, which makes the process less efficient. Brinkert’s team created electrodes whose surfaces were bumpy rather than smooth at a nanoscale level and showed that gas bubbles don’t accumulate as much on the bumpier surfaces.

A Step Toward Spaceflight

Brinkert emphasizes that, while exciting, these results are still fundamental research and that more work is necessary before it can be applied in a practical setting. In the long term, she envisions working with engineers to design a device that works in microgravity and can use sunlight to both harvest oxygen from water and produce hydrogen gas as a storable, renewable fuel. She also hopes for more collaboration between researchers studying solar fuels, like herself, and researchers working on space exploration.“We are both very interested in renewable energies,” Brinkert says. “I hope [this paper] makes some sort of a connection between the two communities.”“On long-term space missions, it’s about creating an artificial atmosphere on the spaceship, so essentially something nature provides for us. We are so lucky to actually have trees and algae and so on performing natural photosynthesis. So we would like to do [...] artificial photosynthesis.”