US Volcano Monitoring May Get an Overhaul 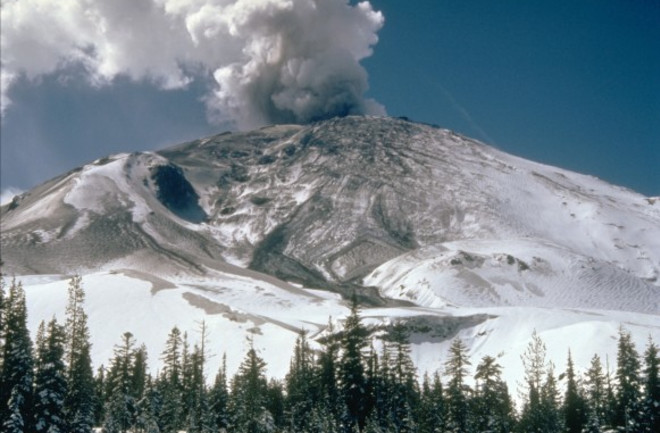 A views of a steaming Mount St. Helens about a month prior to the dramatic May 1980 eruption.

No, I haven't fallen into a lava lake. The past two weeks have been dominated by my 3 days of time on the SHRIMP-RG at Stanford University (jointly operated by Stanford and the US Geological Survey). I have a pile of new zircon crystals to analyze from the Lassen Volcanic Center in California and Mt. Hood in Oregon, so the preparations for that work has swamped every free moment (not to mention the travel time from Ohio to California.) Anyway, I wanted to catch up on some volcano-related news I've noticed over the last week to start to get back on track. United States In some good news on the volcano science front, two senators from across the aisle have introduced a bill to help improve and modernize volcano monitoring in the United States. Senators Cantwell and Murkowski's new bill (S. 2065) would create a National Volcano Early Warning and Monitoring System and unify the various volcano observatories under single umbrella. It would also create a National Volcano Watch Office that would operate around the clock and a National Volcano Data Center. Existing monitoring hardware on volcanoes would be upgraded and new systems would be installed on unmonitored or poorly-monitored volcanoes (such as many in the Cascades and Aleutians). Now, the current system is a bit of a hodgepodge of volcano observatories run by the USGS and partners such as University of Alaska and University of Utah. From what I can tell from this bill, the actually observatories wouldn't necessarily be changed but rather a more formal overarching system will oversee and unify the information being gathering and distributed by the volcano observatories. This would allow for a more uniform response from all observatories when the next US volcano starts to show signs of activity. Two other stories from the US:

BBC In disappointing news, BBC Earth has admitted to doctoring video of the 2015 eruption of Calbuco in Chile by superimposing volcanic lighting from the 2011 Puyehue-Cordón Caulle eruption onto existing shots. We've now reached a point where the people running the media -- and even science media -- have decided that real life isn't exciting enough and instead they try to distort it fit how they want people to see events. Shameful as it leads to more distrust of the media as a source of authentic volcano information. If you want to read about some real excitement of visiting the obsidian flow from the 2011 Puyehue-Cordón Caulle eruption, check out this post on the EGU GeoLog by