U.S. Eruption Update for May 1, 2014: New Magma Under St. Helens and Possible Submarine Eruption in the Mariana Islands 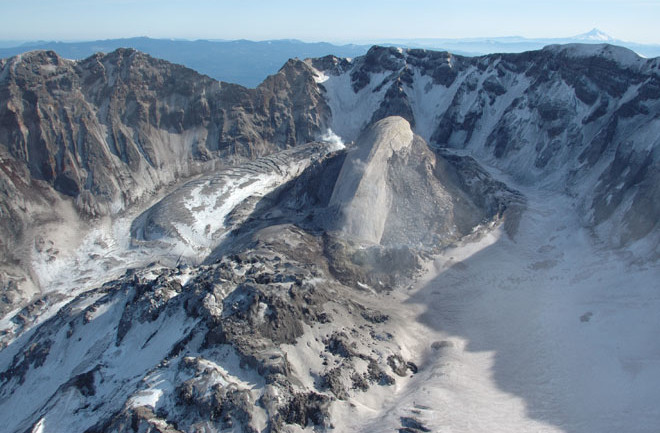 The new dome forming in the crater of St. Helens, seen during activity in February 2005. The volcano has been quiet since 2008. Image: USGS/CVO. Today I have updates on two volcanoes that are monitored by the US Geological Survey -- one you've all heard of and one that was a surprise even to me. St. Helens, Washington The Cascades Volcano Observatory released an information statement this week about the current status of activity at the most active volcano in the lower 48 states, Mount St. Helens. The volcano in southern Washington has been quiet since the last eruptive period ended in 2008 following four years of dome growth within the 1980 crater. However, just because a volcano isn't erupting doesn't mean that there aren't things happening within the magmatic system below the volcano. The USGS reports that the volcano has slowly been inflating during this period since the 2004-08 activity ended and when combined with the low-level seismicity that has been occurring, they think that the magmatic system is slowly refilling at depths of 4-8 km below the surface. Now, this doesn't mean an eruption is going to happen anytime soon -- most volcanoes in like the Cascades will be replenished with magma from the mantle source upwards of 35-40 km beneath the volcano (depending on the thickness of the continental crust). Most of this magma likely takes years to millennia to traverse that distance before its stored beneath the volcano, although there are examples where it seems that magma can make it from the source to eruption in days without pausing, but so far we haven't found evidence of this in the Cascades. Even after that, much of that magma never erupts, so this new magma filling in below St. Helens is just business as usual at such a restless volcano. So, even with these observations, the status was not changed at St. Helens (still Green/Normal). That being said, it does mean that St. Helens needs to be closely monitored to look for signs that magma might continue to move upwards in the system towards the surface because that might be the harbinger of a new eruptive period. Ahyi, Mariana Islands Unlike St. Helens, most people (including myself) have never heard of Ahyi, a seamount in the Mariana Islands. The United States monitors volcanic activity in the northern Mariana Islands, so any activity within the chain is reported through the USGS in cooperation with the Commonwealth of the Northern Mariana Islands (CNMI) Emergency Management Office. Volcanoes under their purview include Pagan and Anatahan. Recently, seismometers on these islands picked up a signal that suggests an undersea eruption might be underway at Ahyi, which is just north of Pagan. However, with any seismic data, it is hard to precisely locate the source of the earthquakes, so Ahyi is the likely source, but not the only source. The seamount last erupted in 2001, but with any of these submarine volcanoes, they might have small eruptions that go missed if there is no surface manifestation, as has been the case so far with this new potential activity. The latest Smithsonian/USGS Global Volcanism Program Weekly Volcanic Activity Report does also mention divers at Farallon de Pajaros noticing "loud explosions" and "shockwaves" that were even felt on the NOAA ship. Farallon de Pajaros is only ~17 kilometers from Ahyi, so this seems to be good supporting evidence of submarine eruptive activity going at Ahyi, thus the elevated Yellow/Advisory status.