Uranus Smells Exactly How You Think It Does 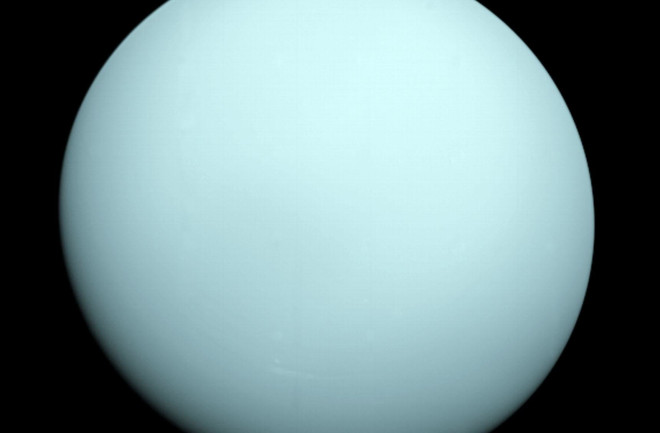 The planet Uranus. It smells bad here. (Credit: NASA) Scientists confirm that Uranus' atmosphere contains hydrogen sulfide, a compound long suspected to be swirling about in the planet's clouds. Using the Gemini North telescope in Hawaii, researchers from the United Kingdom analyzed Uranus using a technique known as spectroscopy to identify the elements contained within. They relied on the Near-Infrared Integral Field Spectrometer (NIFS) at Gemini for the task, which involves breaking down the light reflected from Uranus by wavelength to determine the composition of the planet.

The data allowed them to determine that hydrogen sulfide was indeed present, and at much greater concentrations than ammonia (composed of nitrogen and hydrogen), which sets the green gas giant apart from its planetary companions Jupiter and Saturn. The two largest planets in the solar system have upper clouds made mostly of ammonia ice, and researchers weren't previously sure whether Uranus looked similar or not. The presence of hydrogen sulfide hints at some of the conditions of the early solar system when the gas giants were formed from clouds of gases swirling about the sun. That cloud was far from homogenous, a fact today's research, published in Nature Astronomy reinforces. Though the researchers were only able to observe chemical signatures from the uppermost layers of Uranus' clouds, they were able to extrapolate their findings to the inner regions, where they say similarly elevated ratios of sulfur to nitrogen must exist. The clouds themselves are anywhere from .4 to .8 parts per million hydrogen sulfide, and Uranus has a ratio of sulfur to nitrogen potentially more than 5 times that Jupiter and Saturn, the researchers say. The new information is interesting to researchers, but it also adds a unique bit of sensory information to our understanding of the solar system. Hydrogen sulfide is, after all, the compound that gives rotten eggs, and some more human out-gassings, their noxious odor. Human visitors to the third-largest planet in our solar system would be in for a smelly, though immediately recognizable, surprise if they went outside.