Why Are Uranus and Neptune So Different From Each Other?

Giant impacts could explain the many differences between the ice giants of our solar system, computer simulations show. 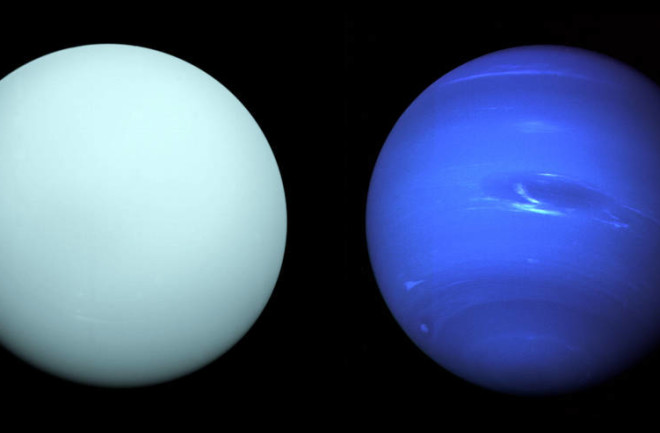 The ice giant planets Uranus and Neptune seem like they should look the same. They have similar masses, sizes and distances from the sun, and scientists long thought they formed in a similar way. But we need only look at them to see that the two planets are obviously different. It's an indication they might not be as similar as they seem at first blush.

Instead, each ice giant could have experienced its own unique, traumatic event at some point in the past, putting them on two different evolutionary tracks. And in order to create a more complete picture of how the early solar system formed, scientists need to know exactly how our outermost planets came to be.

Now, a team of researchers has used computer simulations to show that collisions with large, rocky bodies could have led to the two planets’ diverging histories, possibly explaining why they look so different.

Perhaps the most obvious difference between the ice giants is their rotation angles. The spin of the planet Uranus is tilted by about 98 degrees compared to its orbital plane. Meanwhile, Neptune and most of the solar system's other planets have rotations that are more or less aligned with their orbits (though Venus likewise rotates the "wrong" way).

The two ice giants have other major differences, too, like the fact that Neptune seems to have some heat source warming it from the inside, while Uranus probably does not.

Past studies have suggested that giant impacts might explain the tilted spin of Uranus, while also accounting for other differences between the ice giants. So Christian Reinhardt of the University of Zurich and other researchers decided to test whether today’s state-of-the-art 3D simulations would support these ideas.

The researchers found that if Neptune experienced a head-on collision with some large rocky body in its past, it could have deposited some extra energy deep inside the planet that's been slowly seeping out as heat over time. This, they think, could be the source of the extra warmth that's radiating out of Neptune's interior.

For Uranus, the models show that a grazing or oblique impact from another rocky object could explain the planet's tilt, as well as the odd orbital properties of its moons. Researchers think the moons of Uranus likely formed out of a disk of debris that was once around the planet, and the new models show that such a debris disk could have been the byproduct of a glancing blow.

It’s exciting that the new models show support for collision hypotheses, Reinhardt wrote in an email. But he also notes they still have plenty more work to do for this project. For example, the researchers still need to connect these potential collisions to simulations of the solar system’s formation, as well as model how the planet's insides would have evolved over longer periods of time.

“Understanding the formation and evolution of Uranus and Neptune is not only a missing puzzle piece when trying understand how ‘our’ planets formed," Reinhardt wrote, "but also provides a better understanding of the formation of the many observed exoplanets in this mass regime."

The researchers presented their findings in Monthly Notices of the Royal Astronomical Society.