We've previously celebrated Father Georges-Henri Lemaitre on this very blog, for taking seriously the idea of the Big Bang. His name has come up again in the post expressing thanks for Hubble's Law -- several commenters, including John Farrell, who wrote the book and should know -- mentioned that it was actually Lemaitre, not Hubble, who first derived the law. That offered me a chance to haughtily dismiss these folks as being unable to distinguish between a theoretical prediction (Lemaitre was one of the first to understand the equations governing relativistic cosmology) and an observational discovery. But it turns out that Lemaitre did actually look at the data! Shows you how much you should listen to me. I received an email from Albert Bosma that cleared up the issue a bit. Indeed, it was not just a theoretical prediction (as I had wrongly presumed) -- Lemaitre definitely used data to estimate Hubble's constant in a 1927 paper. He obtained a value of about 625 km/sec/Mpc, not too different from Hubble's ultimate value. Of course, Lemaitre's paper was in French, so it might as well be in Martian. Arthur Eddington translated the paper for the Monthly Notices of the Royal Astronomical Society, in 1931, but left out the (one-sentence) discussion of the data! Here is a slide from Albert containing the original paragraphs. Click for a larger version, and you can compare the French to the English. Thanks to Albert for sending it along. 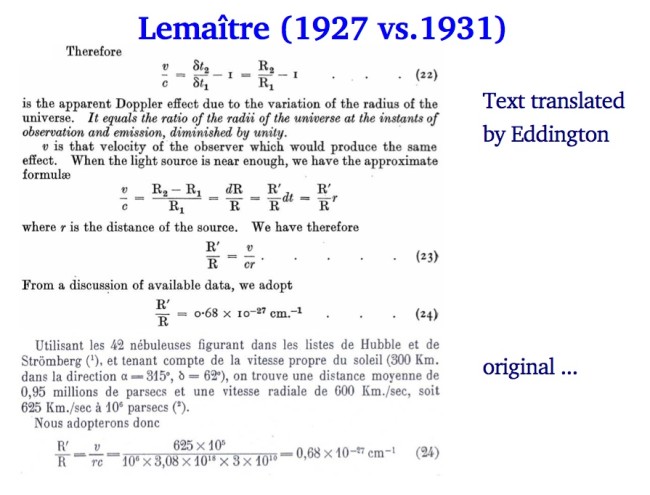 However -- Lemaitre didn't have very good data (and what he did was partly from Hubble, I gather). And for whatever reason, he did not plot velocity vs. distance. Instead, he seems to have taken the average velocity (which was known since the work of Vesto Slipher to be nonzero) and divided by some estimated average distance! If Hubble's Law -- the linear relation between velocity and distance -- is true, that will correctly get you Hubble's constant, but it's definitely not enough to establish Hubble's Law. If you have derived the law theoretically from the principles of general relativity applied to an expanding universe, and are convinced you are correct, maybe all you care about is fixing the value of the one free parameter in your model. But I think it's still correct to say that credit for Hubble's Law goes to Hubble -- although it's equally correct to remind people of the crucial role that Lemaitre played in the development of modern cosmology. Further update: Albert has now sent me more snippets from Lemaitre's original paper (one, two, three), and the English translation. (All jpg images.)