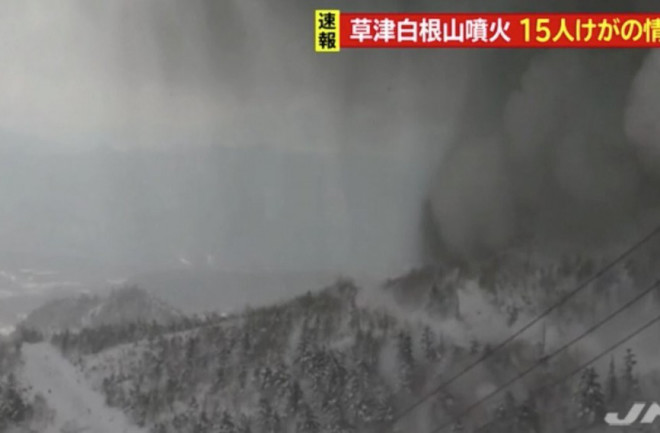 Ash billowing from the unexpected eruption at Kusatsu in Japan on January 23, 2018. Twitter. An eruption at Japan's Kusatsu triggered an avalanche at a ski area on the volcano, injuring at least 25 with possibly more people missing. UPDATE 1/23: One person has died and at least 15 were injured. The eruption was unexpected, with so far no evidence of any warning signs from the volcano. News reports say that rocks littered the upper slopes of the volcano and the ski lodge was hit by volcanic debris as well. Additionally, the blast "triggered an avalanche". Although the reports I've seen don't say it explicitly, I think they mean a snow avalanche on the popular ski site -- and it was this that caused the casualties related to this blast. At least 100 tourists have been evacuated from the volcano.

but is known for having phreatic, or steam-driven, explosions over the 19th and 20th century. These types of eruptions, where water flashes to steam in the crater area of the volcano, tend not to have strong precursors. In fact, the eruption on Ontake in Japan that killed over 40 people in 2014

was also a phreatic explosion with little in the way of earthquakes or other signs an eruption could happen. The JMA did mention that very weak tremors may have been detected just prior to this eruption. Now, this explosion may be a one-off at Kusatsu as many phreatic eruptions are. However, Japanese volcanologists will be looking at the volcano closely because it does have a history of very large explosive eruptions. The JMA has raised the alert status at the volcano to Level 3 (of 5)

as they determine what might come next, if anything.