Understand the science behind a wildly popular, iconic American pastime with The Science of Cheerleading, a new ebook 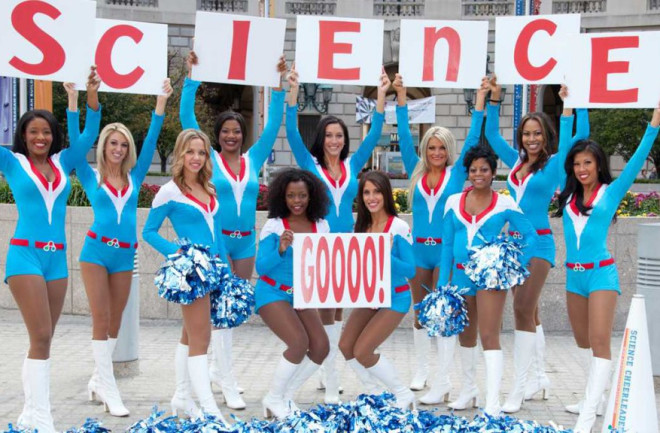 Photo: Science Cheerleader There’s more science to cheerleading than meets the eye. And for the country’s 3 million cheerleaders, one way to engage with science, technology, engineering and mathematics (STEM) concepts is to understand how these fundamental ideas impact their cheerleading. A new book, The Science of Cheerleading introduces cheerleaders to STEM and Citizen Science by doing just that. The free ebook is designed to help cheerleaders learn how and why certain movements and positions work well – and how others can be improved. Want to form a more solid pyramid, or launch a higher basket toss with a precise (and safe) landing? Understanding the science, technology, engineering, and math inherent in cheerleading will help readers gain a greater understanding of cheerleading (and lots of other forces in the world too). The book was created by Darlene Cavalier, founder of Science Cheerleader, an organization of 300 current and former NFL and NBA cheerleaders who are pursuing science and technology careers. These inspiring women recognize that science and engineering are part of nearly every aspect of our lives, and they simultaneously share a message of encouragement to follow dreams and challenge stereotypes along with the practicality of scientific pursuits and concepts. Together with SciStarter (the publisher of this blog, also founded by Darlene Cavalier), science cheerleaders have also participated in several citizen science projects and events including two major initiatives with NASA - Space Microbes in which the growth of microbes in space was studied aboard the International Space Station and the Soil Moisture Active and Passive (SMAP) satellite mission in which citizen scientists are being recruited to collect data that will help scientists understand links among Earth’s water, energy and carbon cycles and enhance the ability to monitor and predict natural hazards like floods and droughts. “An estimated 3 million young women and men are involved in cheerleading in the U.S., “ said Darlene Cavalier. “We hope this book helps them understand the science, technology, engineering, and math inherent in cheerleading. Once they grasp those STEM concepts using something familiar (cheer), they can apply the principles to other things and achieve a greater understanding of how the world works.” Each chapter of The Science of Cheerleading includes:

A high-level look at several science careers is also included. “We’re thrilled to have our youth cheerleaders featured in the Science of Cheerleading ebook, ” said Craig T. Scott, Chief Marketing Officer of Pop Warner Little Scholars, Inc. “They’re either observing the scientific principles of cheerleading, or they’re putting them to the test. This book provides a fun way to help kids and coaches understand and employ the science that they take for granted in the cheers.” Many physics principles are highlighted in the book, along with examples from cheerleading and other real-world applications:

The book includes basic information on other relevant scientific topics like nutrition, computer science, acoustics, and weather. The Science of Cheerleading ebook is available FREE for download on iTunes. The Science of Cheerleading is also available as an interactive PDF (warning, it’s a large file to download!) and it’s available as a NON-interactive PDF (easier to download but it does not include videos). “Kudos to the Science Cheerleader for creating this gem of a book,” said Burroughs Wellcome Fund President John Burris. “The lessons and information contained within are immediately accessible and practical for cheerleaders and sport fans.”

Darlene Cavalier, creator of The Science of Cheerleading, is a former high school, college, and NBA cheerleader (Philadelphia 76ers). She is the founder of Science Cheerleader, a group that playfully challenges stereotypes while inspiring young girls to consider science careers. She ran a $1.5 million NSF grant to promote basic research through partnerships with Disney and ABC TV and collaborated with the NSF, NBC Sports, and the NFL to produce the Emmy award winning Science of NFL Football series. Cavalier is a Professor of Practice at Arizona State University’s Center for Engagement and Training in Science and Society, a contributing editor and senior advisor at Discover Magazine and is the founder of SciStarter, a website that connects regular people to citizen science projects—real scientific research projects done in collaboration with scientists.

The Science of Cheerleading ebook was made possible by a grant from the Burroughs Wellcome Fund, advancing biomedical science by supporting research and education. Other partners include JAMZ Cheer and Dance, Pop Warner Little Scholars, Inc., Team Cheer, Science Cheerleader, SciStarter, SimInsights, Arizona State University, and the USA Science and Engineering Festival.

The above article contains information reproduced from the press release provided by Science Cheerleader.