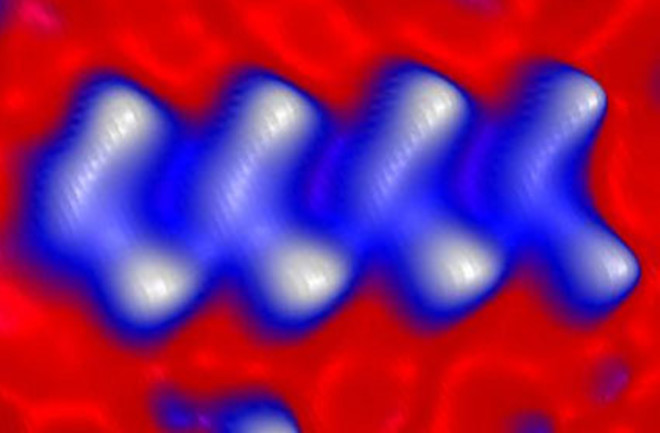 Scientists have created the world's smallest superconductor, made out of just four molecule-pairs and less than a nanometer wide.

That's far smaller than the head of a pin -- which stretches across a million nanometers -- and more on the order of a DNA molecule, which is about 2 nanometers wide [PopSci].

The invention, described in the journal Nature Nanotechnology,

provides the first evidence that nanoscale molecular superconducting wires can be fabricated, which could be used for nanoscale electronic devices and energy applications [Xinhua].

Superconductive materials allow electrical currents to pass through with zero resistance, making them potentially useful to a wide variety of industries. Lead author Saw-Wai Hla, a physics professor at Ohio University's Nanoscale and Quantum Phenomena Institute, explains that earlier it was almost impossible to make nanoscale interconnects using metallic conductors because the resistance increased as the size of wire becomes smaller.

"The nanowires become so hot that they can melt and destruct. That issue, Joule heating, has been a major barrier for making nanoscale devices a reality" [Xinhua], Hla says.

To get around that problem, Hla and his colleagues created molecules of an organic salt called (BETS)2-GaCl4 and placed it on a surface of silver. Then they had to bring the temperature of the molecules down to about 10 Kelvin (-442 degrees Fahrenheit). Using scanning tunneling spectroscopy, the scientists observed superconductivity in molecular chains of different lengths, raising the possibility that nanoscale electronic circuits could be produced at a larger scale. While consumer electronics obviously don't function at such extreme cold temperatures, the news that tiny superconductor wires can be fabricated is still expected to give a boost to the development of nanoscale electronics. And there's yet more excitement in the world of nanotechnology, as two prototypes of motion-powered nanogenerators made of nano-sized parts were also revealed in Nature Nanotechnlogy(pdf). One of the flat, paper clip-sized "nanogenerators" is said to pump out as much energy as an AA battery, leading researchers to propose that, in the future, simply walking with your iPod in your pocket could keep it charged, and the lub-dub of your heart could power a portable blood-pressure sensor

. The two devices, created by materials scientist Zhong Lin Wang and his colleagues at the Georgia Institute of Technology in Atlanta, are both plastic-encased nanogenerators whose main components are the

so-called nanowires, made of crystallized zinc oxide, a piezoelectric material that converts mechanical stress into energy. Each wire is a few hundred nanometers thick (thinner than most bacteria are long) [Science NOW].

In one of the devices, the nanowires look like a bed of nails, held between layers of electricity-conducting materials. When this device is squeezed, the mechanical stress is converted to a tiny amount of energy. In the second and more powerful nanogenerator, the scientists were able to crank out more than 1.26 volts-

The researchers say the nanogenerators could be used, for example, in a network of motion-powered sensors. Wang said: “In your house, you could have hundreds of nearly invisible sensors around to detect fires, floods, toxic gas leaks, or even burglars.... The sensors would wirelessly transmit data to a computer if there’s a problem, and you’d never have to charge them, plug them in, or replace a battery”