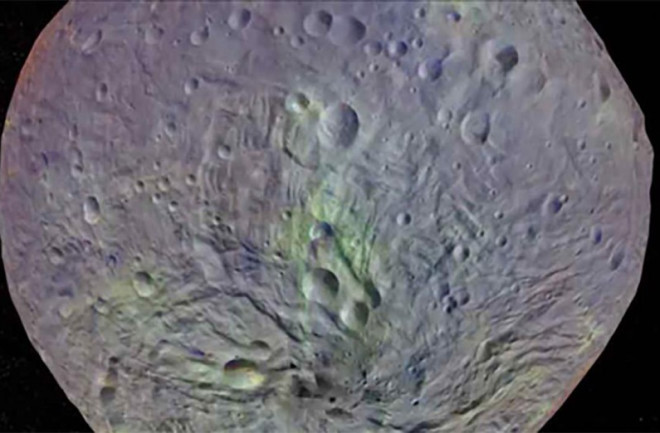 Asteroid Vesta is covered in craters. One of them, Antonia, is the origin of meteorites that fell to Earth in 2015. (Credit: NASA)

Twenty-two million years ago, something crashed into the asteroid Vesta, carving out a large crater and throwing the debris high into space. In 2015, a three-foot meteor streaked through the sky above Turkey before fragmenting into pieces and falling near a village called Sariçiçek. Scientists who studied a whopping 343 pieces of the recovered meteorite now think it originated in that long-ago collision on Vesta.

Vesta is the second-largest object in the asteroid belt, second only to the dwarf planet Ceres. Back in 2011 and 2012, asteroid researchers became very familiar with Vesta, when NASA’s DAWN spacecraft visited and collected extensive images and data about the object, including its many craters from where smaller asteroids crashed into it other the eons. Researchers use the layering of craters and the spray of material around them to judge the ages of craters. This is how they were able to date the Antonia impact crater to 22 million years.

When the meteorite arrived in Turkey, researchers discovered the pieces were of a type called Howardite, one of a more general group called Howardite-Eucrite-Diogenites, or HED. Scientists have suspected for a while that HED meteorites might come from Vesta, since they have similar spectra. And about a third of HED meteorites appear to be about 22 million years old, including the Sariçiçek meteorites. This points to one large collision event responsible for this subset. Counting all those HED meteorites together, researchers expected them to come from a crater at least 6 miles across. But they were missing a smoking gun tying the HED meteorites to Vesta – until now.

Thanks to security cameras near the impact area, scientists could trace the meteor’s incoming path back to an origin in Vesta’s region of the solar system. This is the first time they’ve been able to do so for this particular type of meteorite. Researchers published their results online March 17 in Meteoritics & Planetary Science.

The Sariçiçek meteorites came from Vesta’s region of the sky. And they match the age, size, and composition of Vesta’s Antonia crater. This means scientists have just gotten a sample return mission from an asteroid for free. Combining this hands-on data with the DAWN mission’s pile of data from orbit, scientists should allow scientists to understand Vesta’s history extremely well.