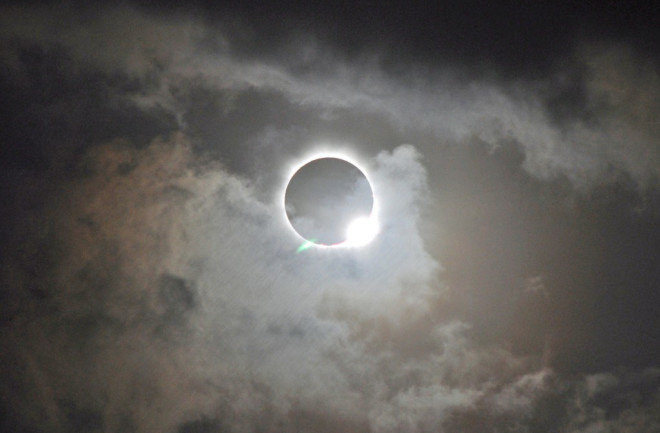 A total solar eclipse that occurred Nov. 13, 2012. This photograph was taken at the northern tip of Australia. (Credit: NASA Goddard Space Flight Center) A total solar eclipse is often described as one of the most breathtaking astronomical events to behold, and on Tuesday, the first and only total solar eclipse of 2016 will occur. Unless you’re located within a narrow, 100-mile wide stretch of Indonesia, you’ll have to tune into the Slooh Community Observatory’s webcast of the event starting at 6 p.m. EST. Slooh will broadcast views of the eclipse from the Indonesian countryside, along with feeds from several other locations along the eclipse path. From their broadcast location, the eclipse will reach totality — the point when the moon fully blocks the sun — at 7:36 p.m. EST and will last for roughly two minutes. The total eclipse will be visible in parts of South East Asia and a partial eclipse will be visible in parts of Alaska, Hawaii, Guam, and American Samoa. You can watch the event unfold right here, thanks to Slooh. NASA will also broadcast the event starting at 8 p.m. EST from Micronesia.

The Beauty of an Eclipse

Solar eclipses occur when the moon passes directly between Earth and the sun. The alignment causes the moon to cast a shadow on Earth’s surface, making it seem as if the sun disappeared. On average, a total solar eclipse occurs somewhere on Earth every 18 months. When it happens, the total eclipse is visible along a path of totality that’s 10,000 miles long, but only 100 miles wide. Most of the time, the path of totality crosses over water and uninhabited parts of the planet. But if you happen to be in the right place and the right time, you’re in for a spectacular show.

Because the moon blocks ultra-bright light from the sun, for a few moments you can see tendrils of the sun’s corona stretch far across the sky. Bright, gaseous jets of plasma — called solar prominences — are also visible during a total solar eclipse. But the view is only fleeting, as the moon’s shadow marches eastward at a speed of more than 1,000 mph.

Next year, far more people will have a chance to view a total solar eclipse. On Aug. 21, 2017, the moon will once again pass between Earth and the sun, but this time the contiguous United States — for the first time in 38 years — will be directly in the path of totality. The moon’s shadow will cut a path from the western banks of Oregon and through Idaho, Wyoming, Nebraska, Kansas, Missouri, Illinois, Kentucky, Tennessee, Georgia, South Carolina and out into the Atlantic Ocean. The 2017 eclipse is expected to be the most viewed ever, and it's not too early to start planning where you'll view it.