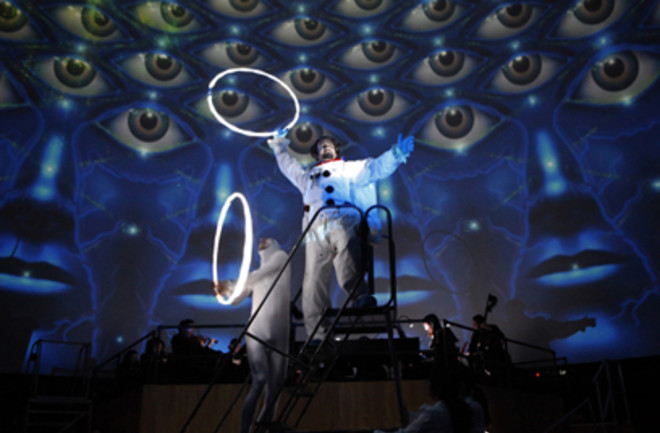 Scholars debate why opera doesn’t seem to hold much appeal for modern audiences, but they’ve overlooked a glaringly obvious answer: The Zeiss Universarium astronomical projector isn’t involved. Or at least, it wasn’t, until now. The Gotham Chamber Opera has set out to give the genre some geek awesomeness with its presentation of Haydn’s Il Mondo Della Luna (The World on the Moon) at the American Museum of Natural History’s Hayden Planetarium. The opera follows the exploits of the love-stricken Ecclitico, who poses as an astronomer to impress Buonafede, the strict father of his beloved. Ecclitico and his two romance-minded accomplices, smitten with Buonafede’s other daughter and maidservant, use a sleeping potion to convince the gullible old man that he has been transported to the moon. There, Buonafede can no longer impede the young lovers’ relationships, and the lunar emperor (a servant in disguise, resplendent in imperial glowsticks) commands the three happy pairs to marry. The acoustics of the planetarium don’t lend themselves to live performance, but the singers and orchestra give an impressive performance in spite of the dead space. The costumes and occasional choreography revel in a burlesque take on Haydn, complete with a bawdy French-maid character, the fake astronomer incarnated as a cross between an 18th century dandy and Dr. Horrible, and plenty of booty-shaking all around. Well-integrated projections on the planetarium’s domed screen contribute swirling nebulae and lunar landscapes that take the audience along for Buonafede’s boozy trip. Performances continue nightly through this Thursday, January 28. Tickets here.