Touring the Volcanoes of Guatemala: A Guest Post from Jeff Sullivan 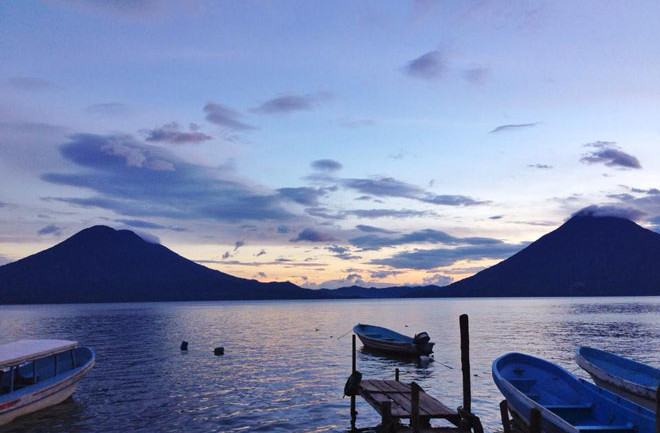 Lake Atitlan, Guatemala. Image: Britt Q. Hoover  This guest post is written by Jeff Sullivan. "Who is Jeff Sullivan?" you ask. Well, Jeff is a baseball writer and volcano enthusiast (as his introduction mentions below). He writes -- and writes fabulously -- for

Pacaya Summit. Image: Britt Q. Hoover  Pacaya is an active vent on the edge of another big caldera, containing another, dirtier lake. It first got going around 23,000 years ago, and most recently it basically hasn’t stopped erupting since 1965. It’s mostly modest, Strombolian activity, as you’d expect, but the only volcanoes I’d ever climbed myself were quiet ones. Previously, I’ve been awed by the sight of summit ice. This was to be a chance to view summit fire, and while the trip we took was a lot more than one excursion, this was the afternoon that I most looked forward to. To scale Pacaya is an unusual experience in a variety of ways. It’s not a particularly difficult hike, and the trail is well established, but after you’re dropped off toward the end of a road, you get pestered to rent sticks or horses, and the pestering only continues.

Renting sticks and horses in Guatemala. Image: Jeff Sullivan The kids will tell you that sticks are necessary, and they’ll offer you a ride on a “taxi” every time you so much as pause to take a breath. They’ll follow you a great distance up the trail before ultimately turning back, but it was definitely the most I’ve ever been spoken to on a hike. The sticks are not necessary, and neither are the horses, unless you have asthma or an affinity for horses. As you head up the trail, you can look west and catch the giant profile of Agua, in the instance pictured looming above the clouds:

Not only is it breathtaking; it’s a perhaps unnecessary reminder that volcanoes seldom appear in isolation. They’re where they are for a reason, and there tend to be a few of them. A traveler I met said that, when she was hiking Pacaya, she was able to see a plume emitting from the summit of Fuego, which made me instantly jealous. The day I hiked, Fuego was both hidden and quiet. These days they don’t let you get all the way up to the summit of Pacaya, because, justifiably, they think it’s too dangerous. While most of the activity is modest, the magnitude is also unpredictable, and that doesn’t even consider the swirling clouds of sulfurous gases. I was surprised to find we weren’t issued hard hats for safety, but I was reassured to see that there’s a designated hazard zone. The tours aren’t going to get you in trouble, and after a few kilometers the hike tops out on the rim of the inactive Cerro Chino crater. From there you can stare straight up to Pacaya’s developing cone, and for any guest I’d highly recommend a pair of binoculars. Our guide spoke almost exclusively Spanish, but my own Spanish came back to me over the course of the vacation, and it turns out this particular guide has been leading the same tour for 25 years, sometimes going as often as three times a day. He lives in the town of Pacaya on the slopes, and he said that, from his house, pretty much every night he can see the summit glow orange and red. The incandescence is visible from tens of miles away, as Pacaya’s frequently spitting out molten rock. That’s what makes it such a destination in the first place. The most recent lava flow of note spilled down the slopes in 2010, and it’s what you see commanding the image below:

The approach to Pacaya in Guatemala. Image: Jeff Sullivan That’s the flow in the foreground, and that’s the flow pouring out of the summit notch. It remained active for quite some time, and guides used to lead groups to areas where they could see the lava up close and roast a marshmallow. On the way up I caught a glimpse of marshmallows in our own guide’s backpack, but on this afternoon there was no roasting and there was no mention of any remaining hot spots, which makes me wonder how old those marshmallows were. Now, when you go up Pacaya, you get a great view of a young volcano, and you’re surrounded by signs of recent activity. But there are also plenty of signs of ongoing activity, such as the gases pouring out of the summit vent: One thing that got me particularly excited was what looked like it might’ve been one of those mysterious smoke/steam rings:

Pacaya emits a possible steam ring (marked with arrow). Image: Britt Q. Hoover  Within a few seconds, the ring disappeared, and no one else in the group seemed all that enthusiastic. Pacaya has spit out rings before, so I thought I might’ve seen something with precedent yet rarity, but when I asked Erik if he thought it was a ring or no ring, he went with “other”. I don’t know exactly what I saw, but it was unlike the rest of the scene, so at least it was weird. Weird and presumably volcanic in origin. Happy to take it. Another first experience for me was walking right up to a small group of fumaroles, emitting what the guide said was water vapor. They’re right off the trail on the Cerro Chino lip, and I couldn’t help myself from taking pictures and video:

On my last trip to Crater Lake, I was incredibly disappointed to learn that Fumarole Bay by Wizard Island was a lie. I’d only ever read about them in the past, unspectacular as they may be, and so to finally see one was memorable. Around where the gas is seeping out, the rock is orange and rotting. The pockets, of course, are warm, and because water vapor doesn’t stink, they can make for pleasant standing spots on a cold day. I was beyond thrilled just to be there to see the summit and the gases and the fumaroles. As we prepared to turn back around, though, there was a short and loud crack. Within a short period of time, there was another, then another. That’s when someone in the party pointed to the Pacaya summit and exclaimed “rocks!” with enthusiasm. I scrambled for my binoculars and watched for the first time in my life an admittedly mild volcanic eruption. Pacaya was spitting out some glowing bombs, landing on the cone beyond. If you’re fortunate enough to see this, know that it’s not unusual. Again, it’s been erupting since 1965, and the summit glows orange every night. But you don’t forget your first glimpse of lava, and to actually see an eruption while you’re on the slopes is by no means guaranteed. Groups only stop for about half an hour, yielding a narrow window. But there’s always that chance, and that chance is a big part of what makes Pacaya such an appealing destination for any would-be volcano tourist. It’s not the only regularly active vent on the planet, but there’s not another quite like it. Guatemala, on its own, is worth an extended visit, even leaving aside all the current and historical volcanism. There’s a lot going for it. Great place. Go see it. My girlfriend loved it, and she doesn’t necessarily share in my geological interest. But then, she took a keen interest in the Lago de Atitlán museum. She was captivated by the Fuego plume, and she stole the binoculars away when Pacaya started spitting. If you’re a volcano dork, Guatemala has a lot for you to experience. And if you’re not, it can most assuredly make you one. Videos: Jeff Sullivan