Tour 10 of the Closest Black Holes to Earth

Black holes should be common in our Milky Way galaxy, but their dark nature means only dozens have been discovered to date. Here are a few nearby black holes astronomers know a little about. 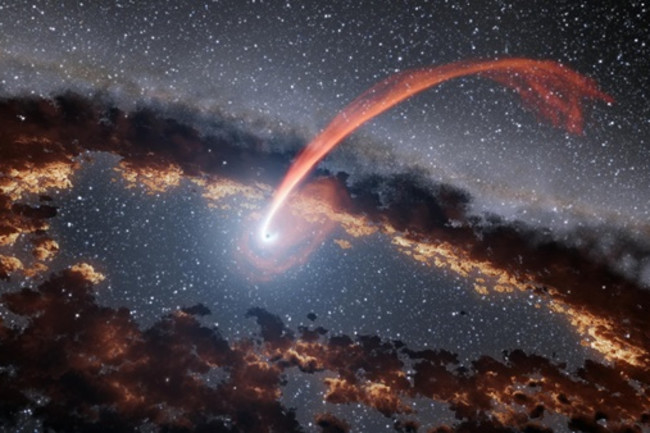 By nature, black holes are impossible to see directly. But astronomers can sense their presence by the way they interact with their environments, letting us glimpse these objects whose gravity is so strong that nothing can escape. In the past century, not only have astronomers shown that black holes do exist, but they’ve found dozens in our own galaxy.

However, based on the number of stars in our galaxy, there should actually be tens of millions out there. The trouble is that, unless they’re near another star, they can be hard to detect. In these binary systems, a black hole can steal material from its companion star, generating distinct X-ray light in the process. A 2016 paper reported 77 nearby candidate black holes from such X-ray observations. We’ve curated a list of 10 of the closest black holes to Earth that astronomers know a little about.

Because of their shrouded nature, black holes are hard to study. So scientists are continually learning more about these objects and refining black holes’ known properties, particularly mass, as telescopes gather more evidence. The numbers listed here include astronomers’ current best estimates of these black hole properties. 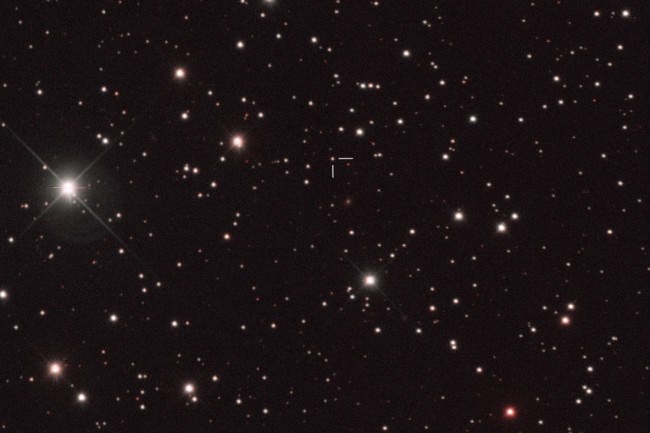 Observations of the star system in the constellation Monoceros, dubbed A0620-00, reveal two objects orbiting each other. One of them is invisible, but its mass is six times more than our sun's. That leads astronomers to think this system is home to the closest black hole to Earth. (Credit: Sloan Digital Sky Survey)

This black hole occasionally releases dramatic outbursts of X-ray light. One of those outbursts happened in 1917, and was how the system was discovered. During an outburst in 1975, V616 Monocerotis brightened over 100,000 times, becoming the brightest X-ray source known at the time. 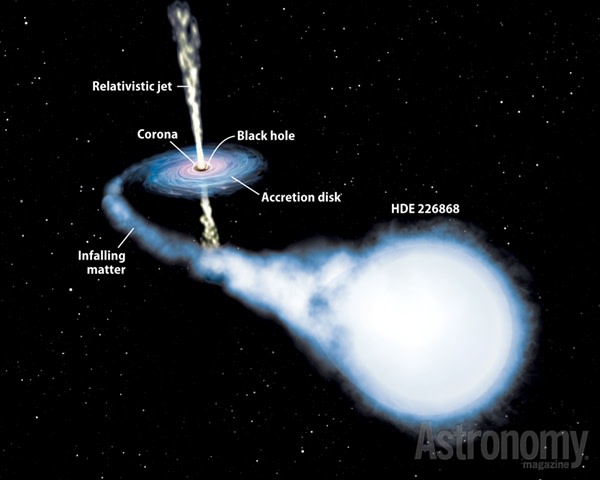 Scientists suspect the black hole Cygnus X-1 began life as a star 40 times the mass of the sun. It likely collapsed directly to form a black hole some 5 million years ago — around the same time the first mammoths show up in fossil records on Earth. 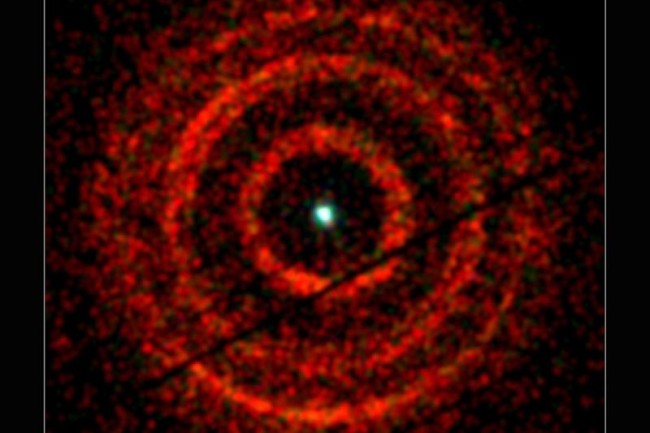 The black hole binary system V404 Cygni occasionally erupts as a nova. In 2015, NASA's Swift X-ray space telescope caught "light" echoes during an eruption that sent X-rays reflecting off the rings of dust that surround the system. (Credit: Andrew Beardmore/University of Leicester and NASA/Swift)

Read More: Astronomers Watch As A Black Hole's Jet Wobbles Like a Top 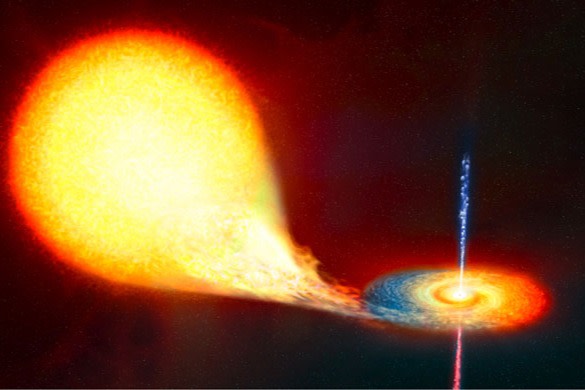 A black hole and a star interact in this artist's illustration of a system like GRO J0422+32. (Credit: European Space Agency)

This black hole is either the smallest ever found that formed from the collapse of star, or it could be a neutron star — the verdict is still out. 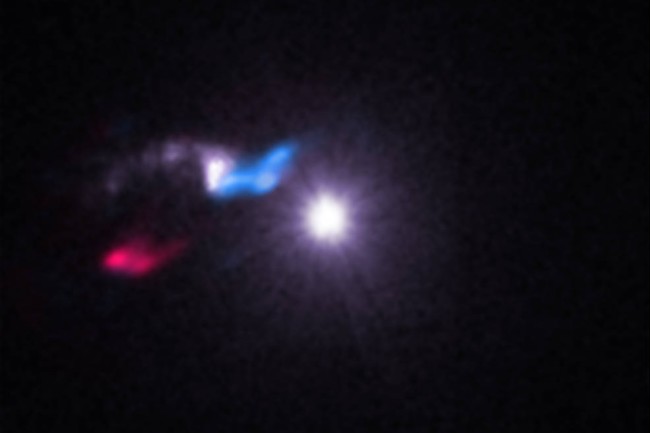 The black hole in Cygnus X-3 sits near a small cloud of gas and dust where a new star is forming. (Credit: X-ray: NASA/CXC/SAO/M. McCollough et al.; Radio: ASIAA/SAO/SMA)

Its mass isn’t well measured, so scientists are uncertain if Cygnus X-3 actually holds a black hole or a neutron star. The object is paired with a Wolf-Rayet star — an incredibly bright object with an unusual distribution of elements, particularly on its surface — that is one of the brightest stars in the galaxy. The star will likely become a black hole itself fairly soon, so stay tuned — for the next million years or so. 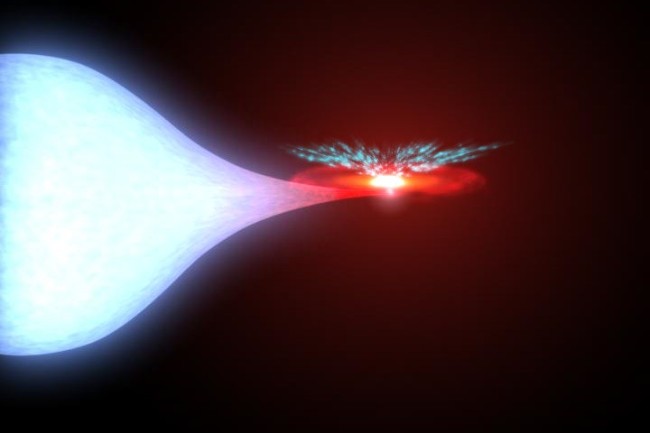 Gas sucked from a star crashes onto a spinning red disk around a black hole in this artist's illustration of the binary system GRO J1655-40. (Credit: NASA/CXC/A.Hobart)

This black hole and star are traveling through the galaxy at 250,000 mph. For comparison, the sun cruises at only 44,740 mph. Astronomers think they achieved their breakneck pace when the black hole was created by an asymmetric supernova, which gave the system a kick. 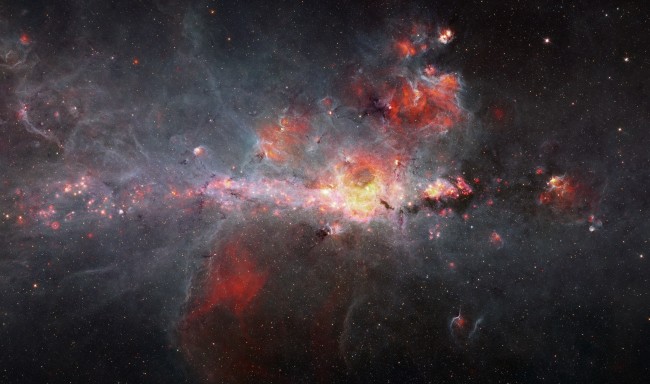 Sagittarius A* (pronounced A-star) is the Milky Way’s central supermassive black hole. It was first noticed in 1931, thanks to a radio signal coming from the center of the galaxy. But by observing the motions of nearby stars over decades, and watching clumps of gas near the object, astronomers have since firmly determined that it is indeed a supermassive black hole. What’s more, they now know most large galaxies also have them.

Read More: The Stars Budding From Our Galaxy's Stellar Nursery 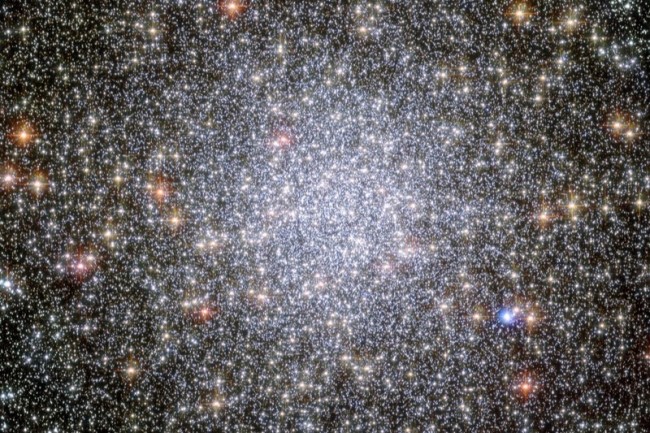 Globular cluster 47 Tucanae, home to tens of thousands of stars, is the second brightest such group of stars in Earth's night sky. Astronomers think it may also be home to a black hole. (Credit: ESA/Hubble)