Phil Plait's picks for the best pictures of 2011 taken of the Earth from space or of objects in orbit. 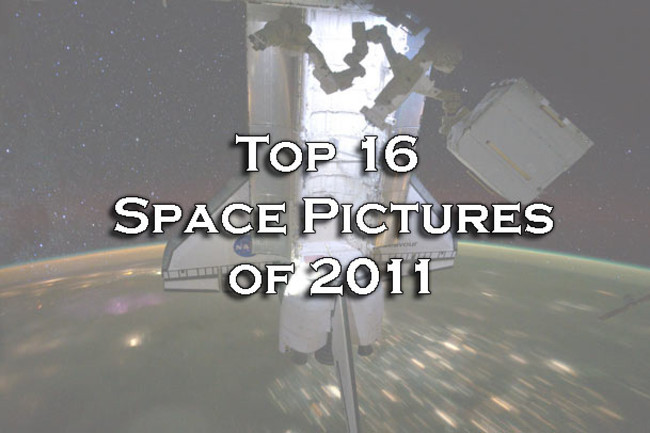 Every year, I pick my favorite astronomical images over the past 12 months and collect them for your eyeball pleasure... and every year it gets harder. This year, when I listed out hundreds to choose from, I realized I had a problem. So I decided to break them up into categories and then post each group as a separate gallery. It was a huge amount of work, but when you see these glorious images, I hope you'll agree it was totally worth it.

This gallery shows my favorite images of objects in near-Earth orbit, or from near-Earth orbit. You'll see our hardware in space, and our lovely planet from above. They're all beautiful, and some are simply astonishing.

It's been a great year for space photography. Let's hope 2012 is even better. 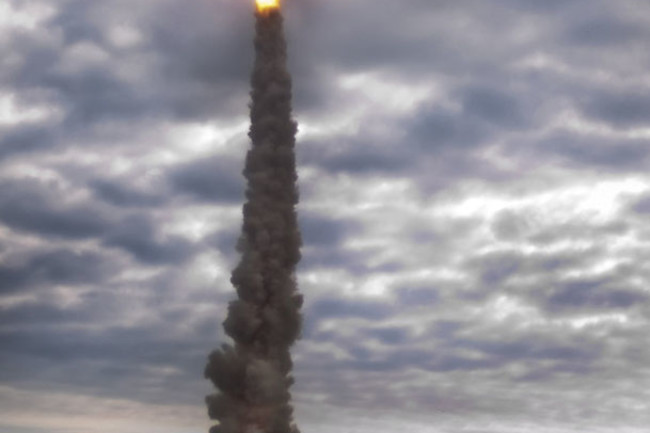 On May 16, 2011, the Space Shuttle Endeavour launched into space for the last time. STS 134, as the mission was labeled, was a success, bringing a scientific instrument called the Alpha Magnetic Spectrometer to the International Space Station, as well as other equipment. Being the second-to-last Shuttle launch of all time, there was a huge crowd of people taking pictures, but no image I've seen came close to this one by photographer Trey Ratcliff, who captured the towering cloud of exhaust capped by the glow of the engines just as the Shuttle went through a low cloud deck. The beauty, and quite literal other-worldliness of this photo makes it stand out as one of the best Shuttle launch pictures ever taken. 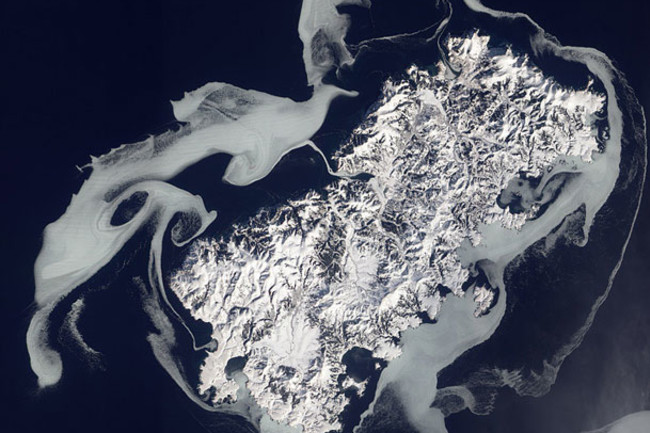 The volcanic island Ostrov Shikotan is one of a long chain of such that lie north of the Japanese islands. There are two extinct volcanoes on the island, and two human settlements as well. This picture, taken in February 2011 by EO-1 satellite, shows ice in the frigid water of the northwest Pacific swirling around the snow-covered island. From a distance, and from a height, the patterns are lovely and graceful, but I imagine anyone living there has a slightly chillier opinion of them. 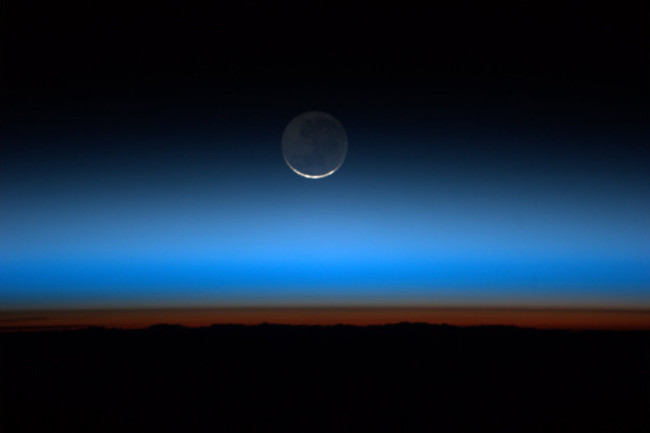 Although it's not squished like the other Moon picture, I love this one -- taken on July 15, 2011 by astronaut Ron Garan -- because of the colors of the Earth's atmosphere, because the Moon was only about a day old, and because you can clearly see the outline of the dark part of the Moon. The light from the Sun illuminates the day side of the Earth, and that light then goes to the Moon, illuminates the surface, and reflects back to us. Called Earthshine, it's twice reflected sunlight! It has an even more poetic nickname: the new Moon in the old Moon's arms. 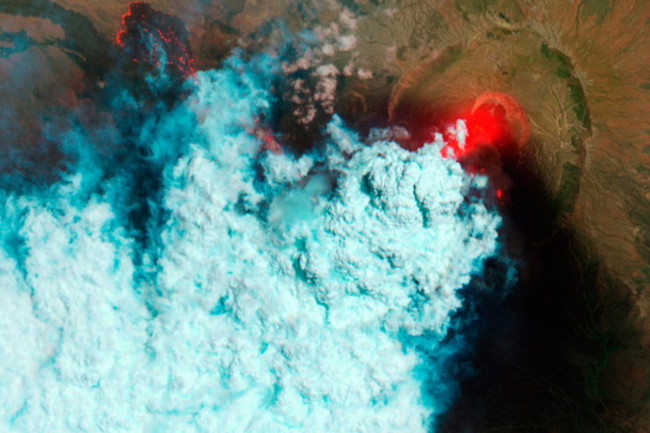 Nabro is a volcano in Eritrea in the horn of eastern Africa. In June 2011 it started erupting in a weeks-long event that was best seen from space, due to the remote location of the volcano. This false-color photo from the EO-1 satellite shows near-infrared as red, clearly showing where hot lava is erupting from the ground. The teal cloud is most likely water vapor from the eruption, with other gases seen as well. Pictures of volcanoes from space are among my favorite of all photographs, especially when they're looking straight down an active volcano's throat like this. 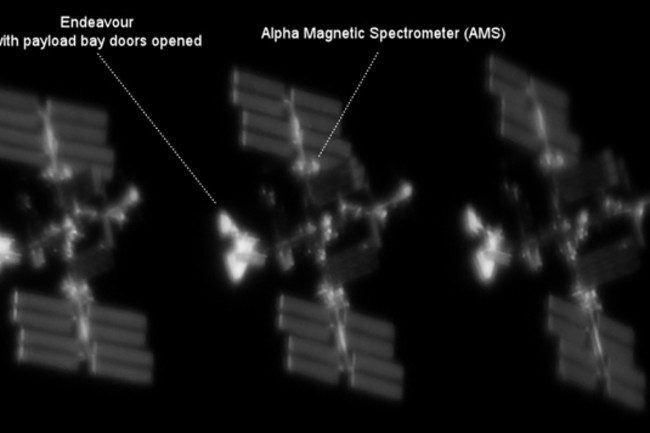 A lot of people aren't aware that the International Space Station is easily visible to the naked eye when it passes overhead; it's actually the fourth brightest object in the sky (after the Sun, Moon, and Venus). But you can go further than that; with a good telescope and some preparation you can see structure on it, since it's about 100 meters across, the size of a football field. But astrophotographers Thierry Legault and Emmanueal Rietsch went further still, capturing these amazing images of the ISS with Endeavour docked to it! The detail is astonishing; Endeavour is clearly visible along with the station's solar panels and various accouterments. It's hard to believe these were taken from the ground with a relatively small telescope, but they were. Thierry has a gift for timing and prep work... check out the next picture in the series to see what I mean.

[Note: Thierry and Emmanuel also got shots of Discovery mission spacewalk, showing the astronaut on the ISS!] 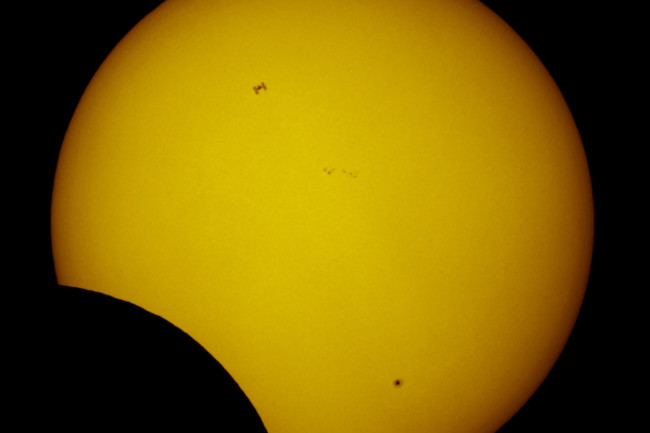 On January 4, 2011 (so it just made this list) there was a partial solar eclipse, with the Moon cutting a chord across the Sun. Astrophotographer Thierry Legault, using some astronomy software, realized the best place to take pictures of the eclipse was in Muscat in the Sultanate of Oman. Why there? Because from that location during the eclipse the International Space Station also transited the Sun! He snapped this picture with preternatural timing; the ISS moves so rapidly as seen from the ground that it only takes 0.9 seconds to cross the Sun's face. Thierry literally had to have split-second timing to get this once-in-a-lifetime shot. Ever wonder why the call it Iceland? Maybe this picture, taken on March 9, 2011, by NASA's Terra Earth-observing satellite makes it a little more clear. 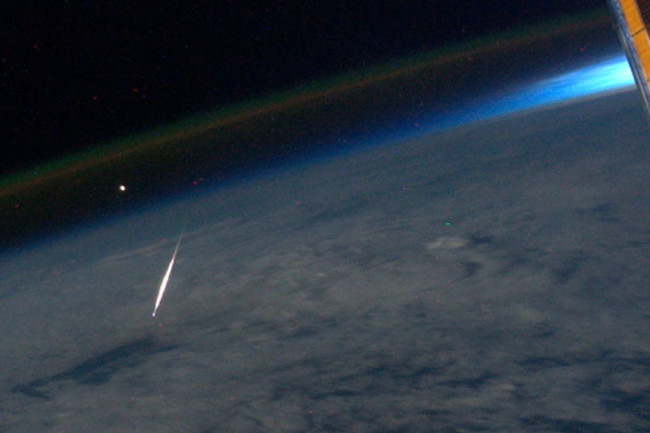 Every year in August, the Earth passes through the debris trail from the comet Swift-Tuttle, resulting in thousands of the tiny bits of fluff burning up in our atmosphere. This causes the annual Perseid meteor shower, and on August 13, 2011, at 7:17 p.m. UT, astronaut Ron Garan took this incredible picture of a Perseid meteor burning up in the atmosphere below him. I wonder if he was nervous seeing those shooting stars as he sat in the space station, looking down. He needn't have been; according to my math the odds are low that the ISS will get hit by a Perseid even if it circled the Earth for millennia. Space is big, and even at 100 meters in diameter, the space station is a tiny target in comparison. 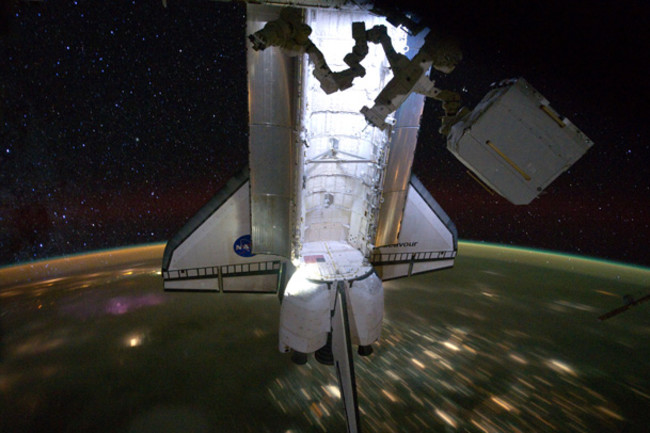 On May 28th, 2011, the day before Endeavour undocked from the International Space Station, an astronaut snapped this amazing shot out a window of the ISS. Endeavour is partially seen, payload bay doors open wide, as well as ISS equipment, and some stars in the night sky. But the scene-stealer is the Earth itself, blurred slightly in this time exposure, cities streaking by as this man-made structure orbits 400 kilometers (250 miles) above the Earth, traveling at 28,000 kph (17,000 mph). 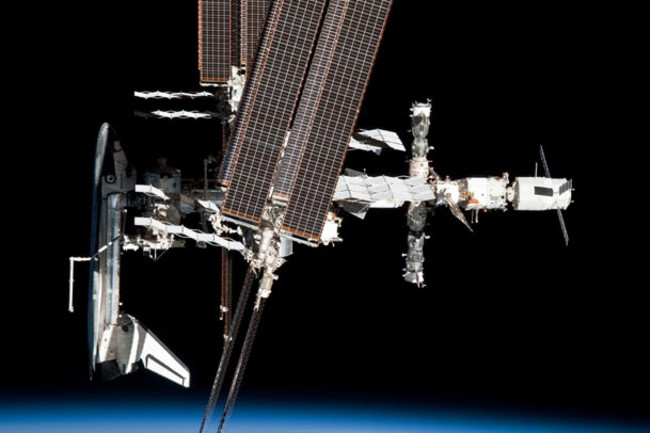 Shortly before the Orbiter Endeavour undocked from the space station one last time in late May 2011, astronaut Paolo Nespoli was in a Soyuz capsule about to return back to Earth. However, before they left, he and his fellow travelers circled the ISS complex and took a series of gorgeous pictures from just about 200 meters away. This maneuver was done at the request of NASA, knowing this was the last time Endeavour and the ISS would be seen together from up close. It was a lovely farewell gesture, and produced a bittersweet photo album of the moment. 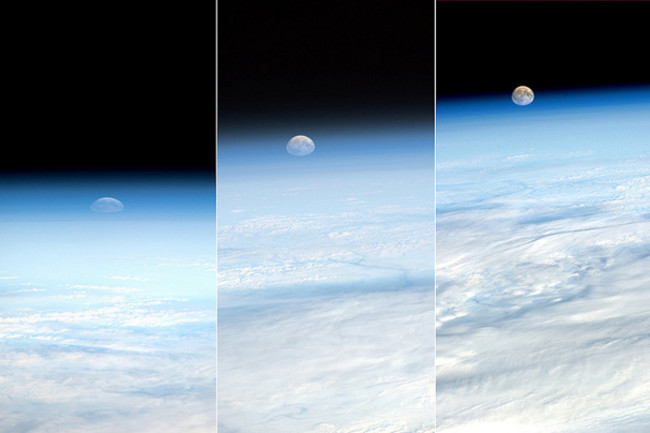 Astronauts on board the space station see 18 Moon rises and Moon sets every day, so they may be used to seeing a sequence like the one above, but it's pretty weird for those of us here on Earth! Italian space traveler Paolo Nespoli took these three picture in January 2011, showing the nearly full Moon rising over the Earth's limb. The Earth's atmosphere bends the light from the Moon, distorting its shape. The part of the Moon nearer the Earth's limb gets bent more than the part away from it, so the Moon looks flattened, and the effect decreases as it rises. You can see this effect here on the Earth's surface, but it's not as strong, making this picture that much weirder looking. 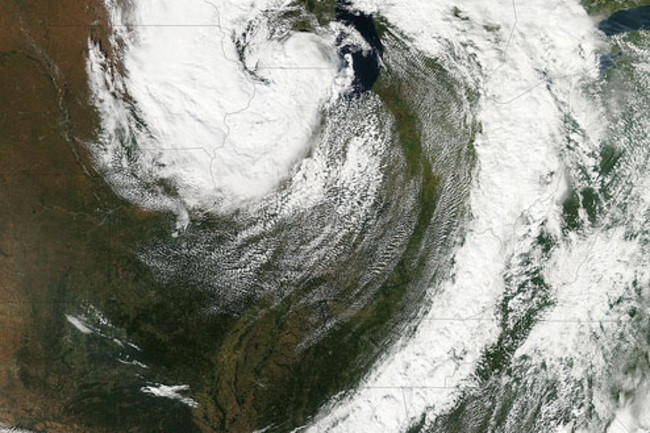 In late September, 2011, a huge low pressure system squatted over the Great Lakes region of the US, causing gloomy weather for millions of people that lasted for days. Seen here by NASA's Aqua satellite, the system is over 2000 km north-to-south, and has a distinct comma shape due to the Coriolis effect, the same phenomenon that shapes hurricanes. While this may have made the weather gray and dreary on the planet's surface, from space it's exceedingly lovely, which tells you that sometimes to see the beauty in things you just need a little shift in perspective. 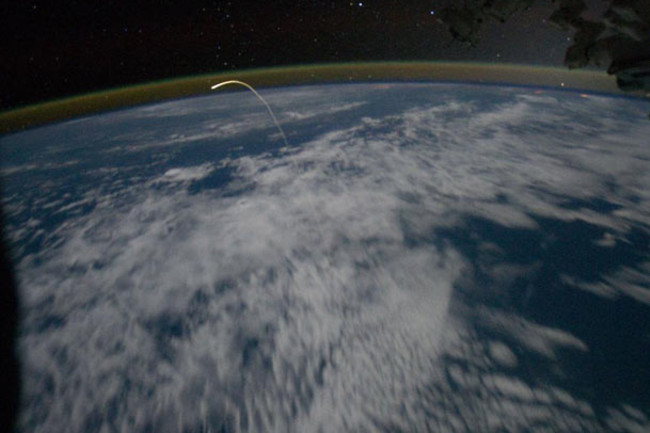 On July 21, 2011, the Orbiter Atlantis re-entered Earth's atmosphere for the very last time. Due to the vagaries of orbital mechanics, the ISS happened to be near the spot where Atlantis came back in, and an astronaut on-board captured this amazing picture of its fiery return. As the orbiter rams through our atmosphere at two dozen times the speed of sound, it violently compresses the air, heating it to incandescent temperatures. In other words, it glows, and the heated air takes a few minutes to dim. The result is a long, brilliant trail marking the final passage of Atlantis back to the ground, and one of the most spectacular pictures ever taken from orbit. 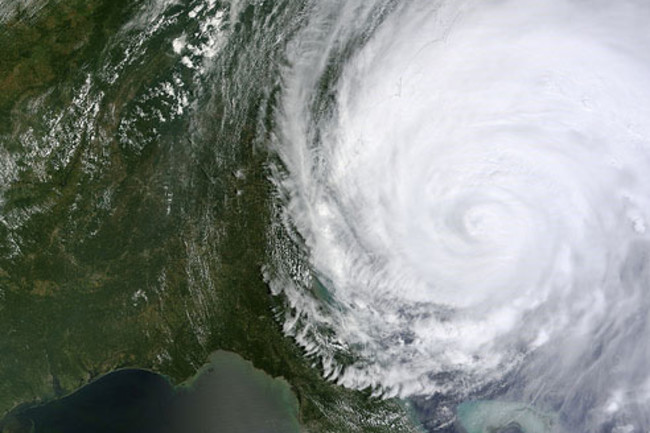 In August 2011, the powerful and huge hurricane Irene achieved landfall over the east coast of the US. It had been a category 3 storm but had subsided somewhat before reaching land, but it still did damage over a vast area. Images from NASA satellites like this one can help us better understand hurricanes. While we can't manipulate or stop them, the more we know about them, the more we can predict where they will hit and where to concentrate evacuation efforts if necessary. Space-based observations of our planet are absolutely critical for our own well-being... and they can also be beautiful.

[Note: You should also check out this video of Irene showing its progress from start to finish as seeen from space.] 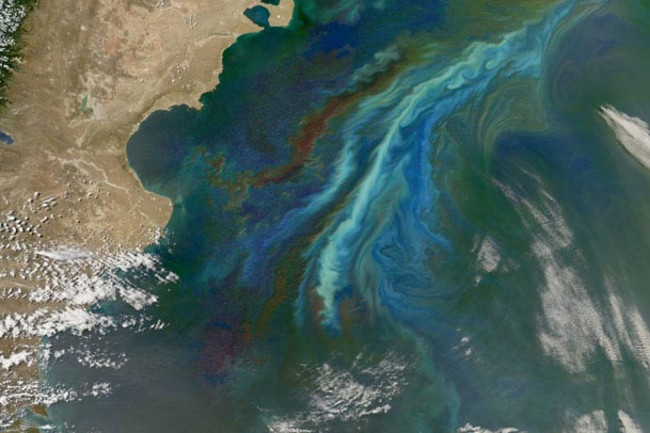 Off the coast of Patagonia in late December 2010 (but not posted until January 1, 2011, if you were wishing to penalize me) a phytoplankton bloom erupted, coloring the Atlantic waters in various shades of teal. Colliding currents stir up the plankton in eddies and whorls, clearly visible in this photo taken by NASA's Aqua Earth-observing satellite. 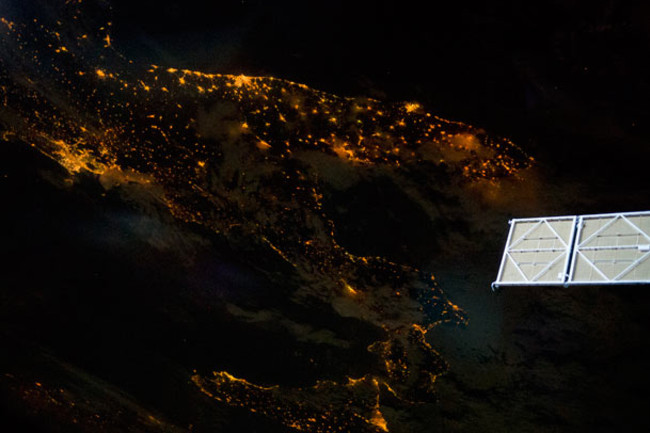 I always get a thrill when a shot of Earth from space shows something recognizable, and there's hardly a more obvious landform on the planet than the boot of Italy. Lit up at night, as seen in this picture taken on June 15, 2011, the boot's outline is drawn in for you by such cities as Bari, Brindisi, and Naples. Sicily is lit up as well. The ISS was almost a thousands kilometers east of Italy when it took this shot looking west, which is why it looks a bit squashed, foreshortened by the curve of the Earth.

[Update: Some folks are wondering about the orientation of this picture. The ISS was northeast of Italy, over Romania, when this shot was taken, and the photographer was looking west. The limb of the Earth can be seen to the lower left. If you imagine yourself looking up at the Earth in this picture, not down, you can flip the orientation in your head like an optical illusion. Try it!]