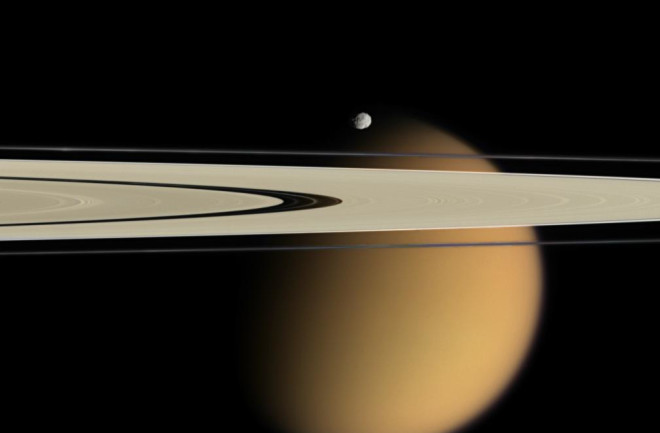 Titan, seen here behind Saturn’s moons, likely has a thick rigid shell of ice comprising its surface. Credit: NASA/JPL/Space Science Institute Saturn’s largest moon, Titan, is one of the solar system’s most fascinating destinations. It’s the second biggest moon in the solar system and the only one known to possess a thick atmosphere. The Cassini-Huygens mission has found it to be weirdly Earth-like, with rocky plains, languid lakes and even precipitation — only the world is so cold the rocks are probably water ice, and the lakes liquid methane. Now even its interior is giving up secrets, thanks to the gravitational data Cassini’s been gathering in its orbit around Saturn. Astronomers had already suspected that Titan’s surface was a shell of water ice, with a subsurface (water) ocean lurking beneath. The new data, published in Nature this week, reveal that it’s a stronger, more rigid shell than previously thought, measuring at least 25 miles thick, and dozens of times more in some places.

The researchers analyzed subtle differences in the moon’s gravity, and found that the highest spots, by elevation, on Titan’s surface corresponded with the weakest gravity. That means, counterintuitively, that the highest areas somehow have less mass than usual, resulting in the reduced gravitational pull. What could cause this? The authors suggest two things: first, these higher elevations were likely pushed up by a local thickening of the ice shell, which means less mass in a given area (since ice water is less dense than water). Second, surface erosion has likely worn away some 650 feet of the rocky features on the surface of these elevated areas. Both of these phenomena occurring together on Titan would explain the findings perfectly.

Not only does this give us more details about the nature of Titan’s surface than ever before, it also implies that the moon’s core may be less dense than currently thought. This is all useful not just in understanding the mysterious moon itself, but in developing better working models of large solid bodies (like moons and planets). With future Cassini data promising even more precise information about Titan's activity and makeup, it’s likely Titan will remain one of the solar system’s favorite moons.