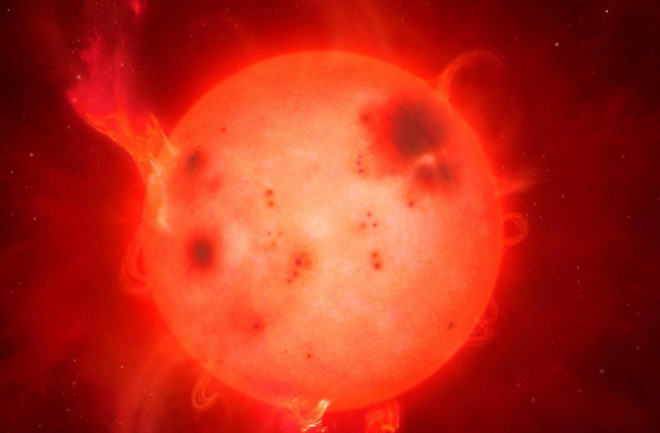 This illustration shows an extremely active, tiny star. (Credit: University of Warwick/Mark Garlick) On August 13, 2017, the Next Generation Transit Survey (NGTS) telescope spotted an intense solar flare from a tiny star barely bigger than Jupiter. But despite this sun's diminutive size, the flare gave off as much energy as 80 billion megatons of TNT. That's 10 times as powerful as the strongest flare ever observed on our own sun. It’s also the coolest star ever observed to give off such a hot flare, and the spectacular outburst is teaching astronomers the power of small stars.

The tiny star bears the unwieldly name ULAS J224940.13-011236.9 and sits 250 light-years from Earth. In fact, classified as an L dwarf, it only barely qualifies as a star. “Any lower in mass and it would definitely be a brown dwarf,” said James Jackman, lead author of the discovery paper, in a press release. Brown dwarfs are sub-stars, too big to count as a planet, but too small to sustain the nuclear fusion in their cores that defines a star. Most telescopes, including NGTS, can’t even see dim little ULAS J2249−0112 during normal times. But the flare lit up the star clearly in the data, boosting it to 10,000 times its normal brightness. Jackman and his team published their findings April 17 in the Monthly Notices of the Royal Astronomical Society Letters. Because flares last only a few minutes – this one was visible for 9.5 minutes – it takes luck or a special instrument like NGTS, which looks at wide patches of the sky over quick time intervals, to spot such phenomena.

NASA's Solar Dynamics Observatory caught an X2.0-class solar flare erupt off our own sun in 2014. (Credit: NASA/SDO) Astronomers have spied powerful flares from tiny stars before, but they are rare. In general, smaller stars like this one have fewer, less powerful flares than larger dwarf stars. ULAS J2249−0112 is just the second L-dwarf flare ever seen from the ground and the sixth L-dwarf to be seen flaring at all, and this flare is the brightest yet seen in an ultra-cool star. Astronomers weren’t sure until now that such small, cool stars had enough energy in their chromospheres, or outer layers, to support such powerful flares. But the find shows that even tiny stars can pack quite the punch.