Tiny Satellites Are Classrooms In the Sky

As technology shrinks, so do satellites, making them accessible to students whose research in space can impact scientific advancements. 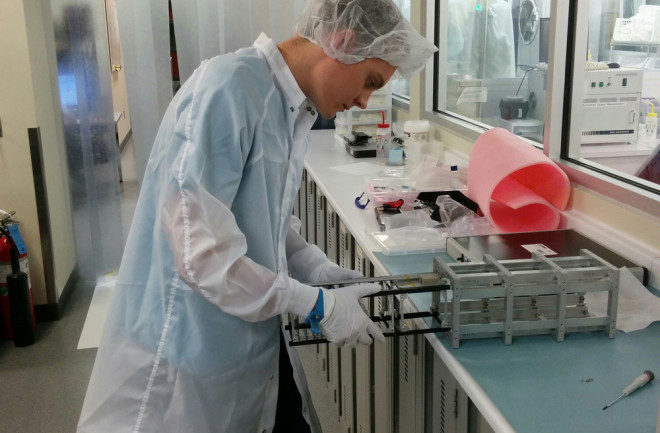 Collin Cupido picks up the satellite model and mimics how it will hang in space, moving it around his body as though it were orbiting Earth. The satellite is a CubeSat, a miniature cube-shaped spacecraft or nanosatellite that can conduct experiments in space. Cupido actually holds three linked cubes, altogether about the size of a loaf of bread. Inside that tiny exterior lies one of the best hopes for the future of space research.

The satellite, named Ex-Alta 1, is the first of its kind built at the University of Alberta, says Cupido, a recent graduate and the project’s systems leader. But this satellite is just one of 50 being crafted by universities around the world, participating in the QB50 (“cube 50”) mission, a project managed by the von Karman Institute for Fluid Dynamics in Belgium as a way to provide hands-on education while conducting scientific experiments in space. QB50 is one of many projects across the globe aimed at getting students — university, high school and even younger — involved in making and operating CubeSats.

Advancing technology has made the tiny spacecraft far more economical than many ever thought possible. CubeSat parts are relatively inexpensive, and the compact end products can hitch rides on rockets that already go to space, a boon to researchers and students alike. Whereas only large national and international space agencies have funded big satellites — which can be the size of a city bus and cost between $50 million and $100 million to build and launch — the tiny Ex-Alta 1 costs about $800,000. The University of Alberta team raised much of the money through a combination of crowdfunding campaigns, space agency grants, university support and donations from aerospace companies, all typical ways teams currently fund these satellite projects.

Since 2011, through NASA’s CubeSat Launch Initiative, 40 small spacecraft have already launched from rockets and produced years’ worth of data, while teaching students the basics of space technology. The satellites, shoebox-size and smaller, are technologically advanced enough to study space weather, gather resources from other planets and advance our knowledge of space — all while providing hands-on experience that previous generations would have needed years to achieve.

CubeSats started becoming part of the scientific lexicon in the early 2000s, when a Stanford professor wanted to give his students the chance to build and work with space technology.

In 1999, Robert Twiggs, an astronautical engineer now at Morehead State University, helped create the Orbiting Picosatellite Automatic Launcher (OPAL), a microsatellite that can propel several satellites as small as ice cream bars into space. The goal was to see if a mother ship microsatellite could launch smaller daughter ships, with all the satellites capable of sending magnetic field measurements to Earth.

For over two years after its 2000 launch, OPAL worked perfectly. The mission’s success inspired Twiggs to create a larger design so that students would have more options for experiments. Costing just $20,000, this blueprint formed the basis from which many cube satellites are now built.

“We initially viewed the CubeSat almost like building a Sputnik,” says Twiggs. “Going through all the process and getting it launched and having it work in space, that’s quite a process itself — that’s what we wanted to use for student education. I didn’t conceive of going much beyond the universities.”

In 2010 the National Science Foundation teamed up with the University of Michigan to create the first CubeSat with any scientific purpose: studying the effect of space weather on radio transmissions or GPS. It worked so well that soon other, richer organizations wanted in on the CubeSat action. The sudden infusion of serious cash into the industry drove up the price of a space launch from $30,000 to $120,000 for an existing single-unit satellite. The once “inexpensive” satellites — created primarily as an educational tool — became too costly for many academic programs.

Costs are still far lower than for any large satellite, but for many schools, it’s not a small sum. And to launch their experiments into space on a rocket, they need to be a part of a space agency program. (Cupido says that, if they can, universities that build CubeSats set up some kind of partnership that eventually guarantees them a spot in space.) Not every school has the resources to participate, but this space research is still far more accessible for students now than it’s ever been in the past. Nowadays, teachers can order full CubeSat kits — containing all the components necessary to create a satellite — online from leading suppliers in the U.S.

“My generation saw the birth of the Internet. Now, today’s students are growing up where satellites are something they can do themselves,” says Jason Crusan, director for advanced exploration systems with NASA. “That’s pretty revolutionary.”

At the University of Alberta lab, Cupido wears a lab coat, a dust mask, a hairnet and gloves as he delicately handles the tiny parts that make up the interior of the Ex-Alta 1. Metal probes extend from the top of the satellite, like antennas, to measure electron density.

The probes, along with an onboard magnetometer, will study and predict space weather once Ex-Alta 1 is in orbit. That’s important because space storms can disturb GPS signals and can create problems in communications between airplanes and ground control. A major storm could short out the world’s power supply. CubeSats are ideally poised for studying space storms in the lower areas of the atmosphere, which are too high for weather balloons and too low for larger satellites to survive.

“It’s an interesting region of the world [and] we should investigate it further,” says Jan Thoemel, project manager of the QB50 mission. But it will be months before the satellite will be ready for space with the launch date scheduled for February 2016. QB50 announced the CubeSats will launch from the International Space Station after being transported on rockets already making the journey.

In the meantime, about 50 students gather in a University of Alberta lab twice a week, preparing for the time when they’ll actually communicate with the orbiting spacecraft. Simulators allow them to practice determining battery levels, communicating with the satellite and analyzing mechanical vibrations and stresses on the structure.

“The satellite is essentially a robot with a radio, sensors, eyes and ears. You talk to it a couple of times a day; the rest of the time, it needs to know what to do by itself,” says Cupido. As a result, he and the students have learned a lot about how to make reliable platforms that can function on their own. Even before the satellite launches into space, the students have gained invaluable experience.

Twiggs has already seen the effects of the hands-on education on former students. One was instrumental in creating the groundbreaking Dragon spacecraft for private spaceship-maker SpaceX. Meanwhile, Skybox Imaging, a satellite company created by former students of Twiggs, was recently bought by Google for $500 million.

The next generation of CubeSat students will get their satellites into space even more efficiently, as improving technology makes launches economically and environmentally easier. DARPA, Virgin Galactic and others are working on experimental new orbital launches that use airplanes to get to the edge of space.

The satellites themselves are also becoming more robust, with parts that can withstand higher altitudes and last longer. NASA hopes to launch 11 CubeSats where they’ve never gone before, into deep space, through the maiden mission of its Space Launch System, NASA’s most powerful rocket ever. One of these satellites, the Lunar Flashlight, will study the moon’s resources with the hope that future explorers might one day exploit them for building materials, drinking water or even oxygen. Another of the 11, the BioSentinel satellite, will use yeast to determine the effect of deep-space radiation on living organisms.

“We’ve been able to see the whole growth of an industry, growth of components, and such well-educated students that they are joining the ranks of these new aerospace companies and NASA,” says NASA’s Crusan. “And now we’re actually going to go out and execute some exploration missions, using these small satellites.” Pretty impressive for an overgrown science experiment that fits in your hands.

[This article originally appeared in print as "Classroom in the Sky."]