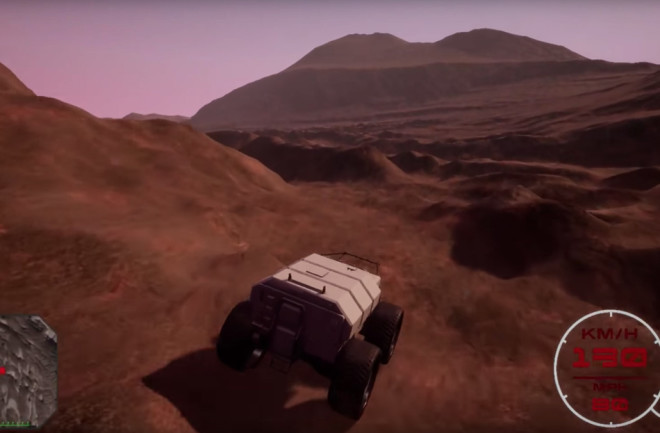 A screenshot from the "Red Rover" game. (Credit: Alan Chan/Youtube) Alan Chan grew up thinking humans would be living in space and exploring Mars by now. Unfortunately, that’s not the case. Instead, he decided to explore space on his own by creating a video game that allows people to drive around the Red Planet’s actual terrain in a souped-up rover. “Red Rover,” a new video game, recreates Mars' surface using satellite and terrain data from NASA’s HiRISE Mars orbiter. The High Resolution Imaging Science Experiment (HiRISE) has a lens that’s photographed Mars in incredible detail, giving scientists the ability to see objects as little as 3 feet wide and to study the planet’s surface structure. That made its data ideal for Chan’s driving game. https://www.youtube.com/watch?v=1QAwRH1wrZ0 While the driving game doesn’t have any missions or way to earn points, it allows you to roam Mars in a way that’s pretty close to actually being there. You can explore nine different areas of the Red Planet, including Victoria Crater, Western Cerberus and South Olympus. Chan hopes to add more in the future as more data are released. The game is available on Steam for $4.99. It also supports Oculus Rift VR for an even more immersive experience, if that’s your thing. Excited for humans to make it to Mars? Learn what it takes to settle the Red Planet with our latest digital exclusive “Martian Homes & Gardens.”