This galaxy pair has already collided at least once. Red clumps show where a past collision has encouraged new stars to form. 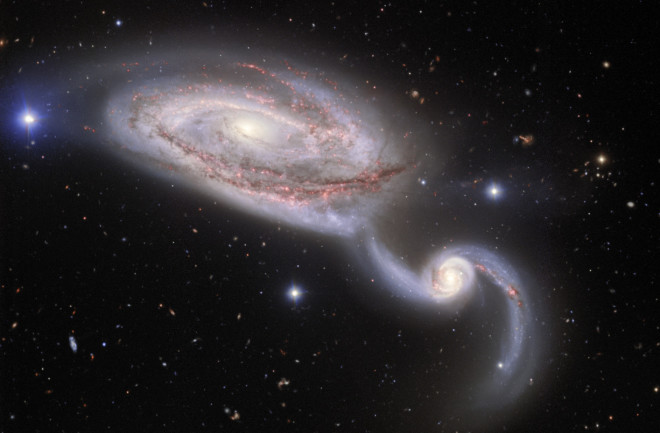 The galaxies NGC 5394 (the smaller one, on the right) and NGC 5395 (the larger one, on the left) are in the middle of colliding over the span of millions of years. (Credit: NSF’s National Optical-Infrared Astronomy Research Laboratory/Gemini Observatory/AURA)

Collisions between galaxies can take millions of years. The galaxies NGC 5394 and NGC 5395 are in the middle of one such ambling encounter.

The pair, located about 160 million light-years away from Earth, have already collided at least once, astronomers say. The stars in each of the galaxies are so far apart that any collisions between stars are very unlikely. However, the collision may have caused turbulent motions in the galaxies’ gases and triggered new bursts of star formation.

In this new image from the Gemini Observatory's telescope in Hawaii, areas of new star formation appear as reddish clumps in both galaxies’ spiral arms.

During the collision, the galaxies pull on each other gravitationally and warp each others’ shapes. And because of that shape, this galaxy pair has been nicknamed the “Heron Galaxy." The larger of the two galaxies is said to represent the bird’s body, and the smaller galaxy its head and beak.