This Spacecraft Will Detect if Exoplanet Skies are Cloudy, Hazy or Clear 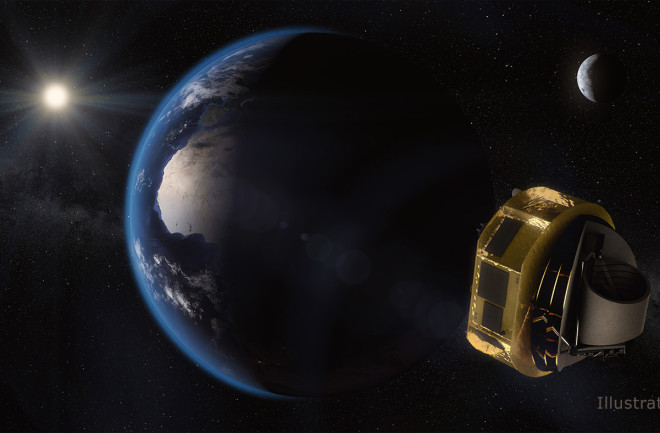 NASA announced last week that it will contribute to a European Space Agency mission scheduled to launch in 2028. The spacecraft, called ARIEL (for Atmospheric Remote-sensing Infrared Exoplanet Large-survey), will be the first space mission dedicated to studying exoplanet atmospheres.

During its primary mission lasting some four years, ARIEL will study the atmospheres of roughly 1,000 exoplanets. NASA’s contribution, an instrument called CASE, will let astronomers tell whether these exoplanets’ skies are cloudy, hazy or clear. The results will help astronomers understand how planets and their atmospheres form and change over time.

So far, astronomers have discovered thousands of exoplanets that pass in front of their stars from our point of view. With the right tools, astronomers can study light from the host stars that pass through the planets’ atmospheres. This can reveal information like the chemical makeup and temperatures of these atmospheres as well as what chemical reactions are taking place there.

The James Webb Space Telescope, currently scheduled to launch in 2021, will be able to study exoplanet atmospheres. But since JWST will split its time between multiple projects, it will only focus on studying the atmospheres of a few exoplanets. ARIEL, however, will observe the skies of about 1,000 exoplanets, from rocky planets to Jupiter-like gas giants.

“I’m really looking forward to the ability to place individual planets within a statistical context,” said Mark Swain, an astrophysicist at NASA’s Jet Propulsion Laboratory who is heading production of the CASE instrument. “That is something which you need a large survey of exoplanets to do.”

Cloudy, or a Chance of Haze?

CASE, which stands for Contribution to ARIEL Survey of Exoplanets, will capture wavelengths of visible and infrared light that carry evidence for clouds and hazes in planets’ skies. What makes something a cloud or haze? Clouds condense out of the atmosphere, like water droplets that make clouds in Earth’s sky. Hazes are molecules that often form through chemical processes when light interacts with molecules in the atmosphere.

Understanding whether an exoplanet has clouds or hazes will help astronomers better interpret other information about the planet’s atmosphere, like chemical makeup and temperature, and figure out what physical and chemical processes are happening.

Also, understanding chemical compositions of exoplanet atmospheres might help decide which of two leading theories for how planets form is most likely correct. One theory suggests that planets will tend to have similar fractions of heavy elements as their host stars, while another implies that the heavy element fractions could be quite different.

Finally, studying the atmospheres of 1,000 planets should help astronomers find out what’s typical and pick out interesting cases to delve into.

“When we see a single planet, a big question is, ‘Is this kind of like the others, or did something special happen here?’” Swain said. “And that’s a fundamental capability that ARIEL is going to give us.”