This Rocky Super-Earth Had Its Atmosphere Vaporized 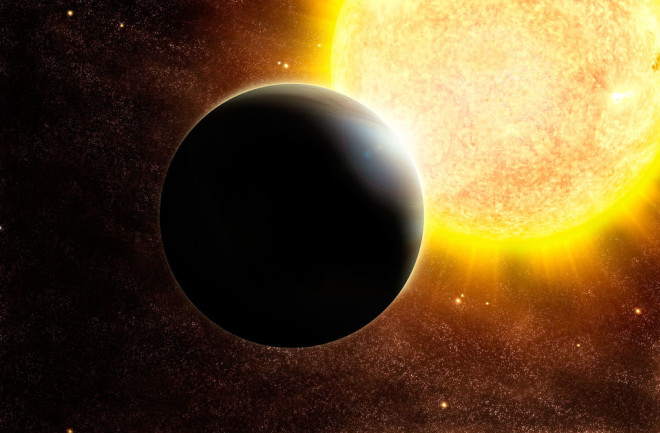 Astronomers using the Spitzer Space Telescope discovered that exoplanet LHS 3844b probably lacks any atmosphere at all. (Credit: ESO/NASA)

Rocky planets just a little larger than Earth are some of the best targets for finding life in our local cosmic neighborhood. They’re abundant. But it’s not just the size that has to match Earth. Our planet wouldn’t be the life-sheltering place it is without its atmosphere, which keeps us warm enough not to freeze, but not so hot that we smother or boil away all our oceans. Our distance from the sun plays a prime roll in keeping a Goldilocks-perfect atmosphere — we’re not too far and not too close.

But finding worlds like ours out in the galaxy is difficult business. Astronomers have a hard time telling what an atmosphere looks like from light-years away. But scientists are trying hard to crack that particular nut. One of the latest attempts involves a planet called LHS 3844b, a rocky world 1.3 times the width of Earth that orbits a dim star every 11 days. Astronomers stared at it with the Spitzer Space Telescope for 100 hours, but found that the planet probably lacks any atmosphere at all, let alone one friendly to life. Instead, it’s simply a hot, bare rock orbiting its star. Astronomers led by Laura Kreidberg from the Harvard-Smithsonian Center for Astrophysics reported their findings August 19 in the journal Nature.

The researchers considered many different possibilities for their planet. By comparing the Spitzer data to models of different planet and atmosphere combinations, they could judge what seemed plausible or unlikely. Unfortunately for those looking for an Earth twin, any substantial atmosphere around LHS 3844b looks unlikely.

The researchers checked on atmospheres made of oxygen and carbon dioxide, as well as nitrogen-dominated atmospheres like that on Earth. None of them are good fits to the data. They rule out atmospheres all the way down to something like Mars, which is extremely thin and mostly made of carbon dioxide. The best fits were for a bare rock, probably made of something basaltic like Mercury or the moon, given how reflective it seems to be – which is not very. Whatever the planet is made of is better at absorbing light than reflecting it.

The researchers considered the possibility that the planet had at least a thin atmosphere (like Mars or Mercury), since that couldn’t be ruled out by the data. But even that seems unlikely. Modeling shows that the star gives off enough energy and is close enough to the planet that it would erode away a thin atmosphere on short timescales.

The only possibility the researchers could find is if the planet can somehow consistently replenish its atmosphere, but even that seems unlikely, and it would still have to be a tenuous atmosphere to fit the data.

In the end, a cooler world is probably needed if scientists want to find a real Earth twin and with it, any chance of life in the universe. But scientists should have plenty more targets to investigate, as missions like TESS add more worlds to the list, and as telescopes like James Webb come online to dig into their secrets.