This Is Why Your Shoelaces Are Always Untied 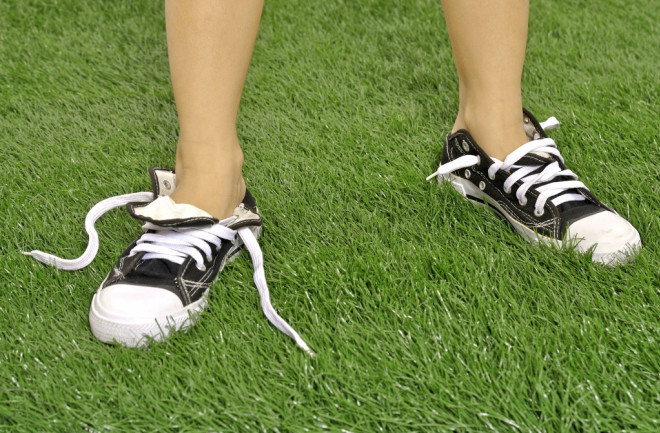 (Credit: leolintang/Shutterstock) Hey, your shoe is untied, and now scientists know why: the combination of foot stomping and leg swinging cause the laces to slip apart. Yes, a child could have told you this, but there’s a reason scientists gave knots a closer look. Knots are everywhere, from stitches used in surgery to steel cables used in construction. Sailors are familiar with the clove hitch, bowline and cleat hitch. Even DNA is a snarled knot. With knots holding so much together, scientists thought it couldn’t hurt to clearly explain how they come undone. Mechanical engineers at the University of California at Berkeley became intrigued by knot strength after coming across a TED talk that explained there were two different ways to tie the common shoelace bow tie knot, one of which is stronger than the other. The weaker version is the “granny knot”: take a rope, cross both ends left over right, bring the left end under and out, and repeat. The stronger version is the square knot: instead of repeating the first step, finish the knot by crossing the right end over the left. "I wear dress shoes, and my shoelaces seem to come untied all the time," says study lead author Christopher Daily-Diamond. "But when we looked into it, while people knew one of these knots was stronger than the other, the mechanics of why that was remained a mystery." To help solve the puzzle, the researchers attached sensors to shoelace knots as study co-author Christine Gregg, a runner, walked and ran. They also repeatedly swung a pendulum arm with a shoelace knot tied on it to better analyze forces knots experienced. Coming Undone Slow-motion videos of Gregg running on a treadmill showed the granny knot held together for many strides, but when it only slightly loosened, the knot typically failed catastrophically within as few as two strides. Intriguingly, the weak knot did not untie itself when Gregg's leg was just swung back and forth, nor when the foot was only stomped repeatedly on the ground. This suggested that knot failure is based on some interplay between the swing and stomp.

The undoing of a knot. (Credit: Christopher A. Daily-Diamond, Christine E. Gregg and Oliver M. O’Reilly) The research team found the repeated impact of shoes on the floor during running loosens the knots. The sensors revealed that during running, feet strike the ground with seven times the force of gravity, causing knots to deform. The whipping motions of the free ends of the laces caused by swinging legs then led the laces to slip, eventually leading to runaway unraveling of the knot, the researchers said. In line with this theory, adding weights to the free ends of the laces, which increased the pulling those ends experienced as they swung, led knots to fail more often. Daily-Diamond, Gregg and senior author Oliver O'Reilly detailed their findings online April 12 in the journal Proceedings of the Royal Society A.Why Study Knots? Daily-Diamond noted that researchers are today building microscopic structures made of DNA and other molecules. "DNA origami," for example, could yield everything from advanced microchips to smart medicines. "These can be incredibly complicated knotted structures that are subject to a variety of forces, so if you want to start building these structures, you'll want to know how they can become untied," Daily-Diamond said. Future research can perhaps track how shoelaces move during walking and running to unravel the mystery of why square knots are stronger than granny knots once and for all, Daily-Diamond said. Computer simulations of how these knots work could also disentangle the complex role friction likely plays, he added. Until then, be sure to stick with the square knot.