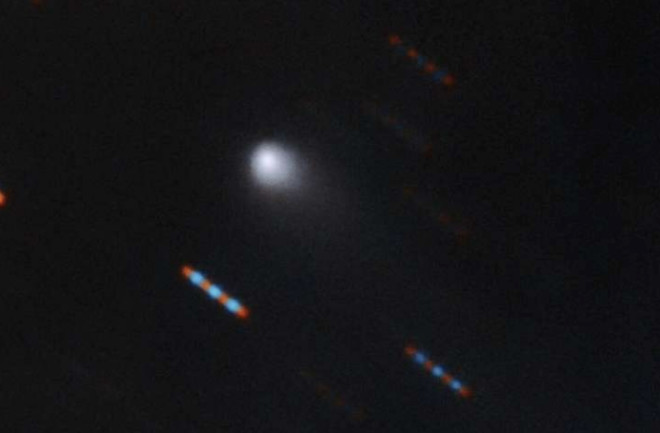 Asteroids, comets and other rocky objects litter the solar system, left over from when the planets formed. Scientists study these space rocks to learn about what the early solar system was like. Now, we’re entering an era in which we can learn about alien planetary systems in the same way, thanks to interstellar comets and asteroids.

In the last few weeks, astronomers have confirmed the second known rocky object from another star zipping through our solar system. The first interstellar object ever discovered was an oddball called ‘Oumuamua, and whose behavior left some astronomers wondering whether it was an asteroid or a comet. But there’s little room for debate with this second object: It is a comet.

Its size and color make it similar to comets in our own solar system, researchers report today in Nature Astronomy.

In late August, an engineer named Gennady Borisov discovered the comet and saw that it wasn’t listed in catalogs of known asteroids and comets. In the days that followed, researchers pointed their telescopes toward the object to snap photos and learn more.

On September 8, a computer program alerted a team of astronomers led by Piotr Guzik and Michał Drahus of Jagiellonian University in Poland that the comet might be from interstellar space. The program mines databases of asteroid and comet observations to calculate what the objects’ orbits must be. If it finds an object with an orbit that’s not bound to the Sun, it flags it.

Excited that the newly discovered space rock probably came from outside the solar system, the researchers observed the comet just days later with large telescopes in Hawaii and the Canary Islands.

The more detailed observations reveal that this alien comet, now called 2I/Borisov, is similar in color to our own solar system’s comets, which are a little on the reddish side. This means the comet is reflecting colors of light similar to our solar system’s comets. And that implies they are likely made of similar stuff. The researchers were also able to estimate that the comet’s central rocky section, or nucleus, is probably a little more than a mile wide — a common size for solar system comets.

This all makes the comet Borisov very different from ‘Oumuamua, which had a reddish hue but also seemed to reflect light differently than typical rocky bodies in the solar system.

“To me, these two bodies just tell us that there might be a broader diversity of planetary systems than we thought before,” said Drahus, since these objects carry hints of what their home planetary systems are like.

And unlike ‘Oumuamua, which is now too faint to observe, the comet Borisov will get brighter as it approaches its closest point to the Sun in December. And as Borisov gets closer in the coming weeks to Earth and the Sun, astronomers will have more opportunities to study this interstellar visitor in detail.