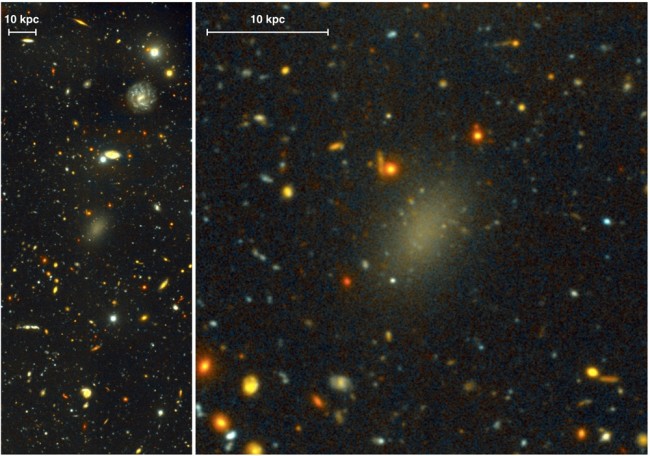 The hazy oval isn’t glare on your screen; it’s an entire galaxy. Dragonfly 44 weighs about the same as our Milky Way, except it’s 99.99 percent dark matter and has less than a hundredth the number of stars. Dark matter is stuff that can’t interact with the electromagnetic force (how we mostly experience the world) so we can’t see or touch it. Scientists can observe its gravitational effects, though, which keep Dragonfly 44’s paltry collection of visible stars from flying apart. There’s around five times as much dark matter as regular matter in the universe, and even our own Milky Way is around 90% dark matter. Astronomers found Dragonfly 44 with the W. M. Keck Observatory and the Gemini North telescope on Mauna Kea, Hawaii and are publishing their results in The Astrophysical Journal. The team measured Dragonfly 44’s mass by observing its stars’ velocities as they zoomed around the galaxy. In a press release, scientist Pieter van Dokkum from Yale University pointed out that a galaxy like this one would allow astronomers to better study a huge mass of dark matter with far fewer stars to block the view, or lack thereof.