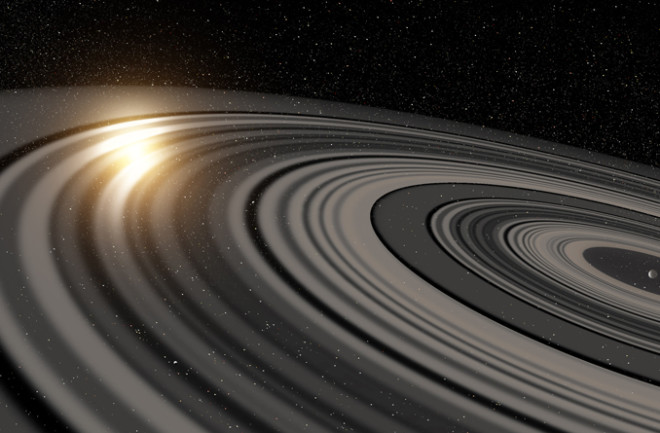 An artist's rendering of J1407b passing in front of its parent star. (Credit: Ron Miller) A newly discovered planet makes Saturn’s famed ring collection look downright tiny by comparison. Astronomers from the Leiden Observatory in Netherlands and Rochester University in the United States discovered a planet encircled by a ring system more than 200 times the diameter of Saturn’s. With more than 30 rings, it’s the first system of its kind to be discovered outside our solar system, and it may be churning out more moons and protoplanets.

Rings Around the Gas Giant

SuperWASP is the United Kingdom’s top exoplanet detection program, and consists of two robotic observatories that operate year-round. Using data from the SuperWASP project, astronomers discovered an unusual series of eclipses that occurred in 2007 and obscured light from a Sun-like star called J1407. For 56 days light from J1407 faded in and out in a complex pattern, and at times more than 95 percent of the star’s light was blocked. Astronomers concluded that a ring system must have caused J1407’s peculiar dimming. Here’s how the thinking goes: As a ring system passes in front of a star, it blocks light where dust and debris is thickest. More light passes through gaps in the rings, where orbiting moons or protoplanets forged paths through the debris field. The pattern they observed is thus similar to watching flickering sunlight through the windows of a moving train or bus.

We can’t actually observe the rings, but based on the light curve from SuperWASP data, astronomers estimate that the ring system is more than 74 million miles in diameter, which is roughly 200 times the diameter of Saturn’s ring system. The rings are also incredibly thick, as it takes quite a lot of material to block more than 95 percent of a Sun-like star’s light. Astronomers believe the system contains about an Earth’s mass in dust particles. At the center of the rings is a giant planet, called J1407b, which is roughly 10 to 40 Jupiter masses and orbits its star once per decade. Researchers published their findings this week in the online journal arXiv.

If the rings around J1407b were put around Saturn, we could see them at dusk with our own eyes, as in this illustration. Credit: M. Kenworthy/Leiden

Astronomers believe J1407b’s ring system will become more transparent over the next several million years as moons and other satellites continue to form in the debris field. Both Jupiter and Saturn went through a similar development process, so observing J1407b is a bit like looking back in time. Therefore, astronomers can further study J1407b to decipher the physical and chemical properties of satellite-spawning planetary disks – before they settle down into stable, mature planets sporting a lot less bling and a lot more little offspring.