This Exoplanet Is Burning Hot and Pitch Black 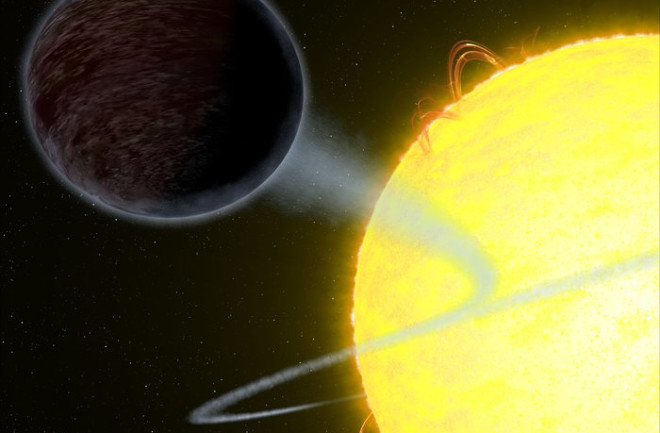 This artist’s impression shows the exoplanet WASP-12b — an alien world as black as fresh asphalt. (Credit: NASA, ESA, and G. Bacon (STScI)) An exoplanet twice the size of Jupiter is hot, egg-shaped and coal-black. Wasp-12b is a gas giant orbiting around a Sun-like star some 1,400 light-years away. It makes a complete orbit around its sun in just 24 hours because it lies so close to its star, and the proximity pushes the temperature to around 4,700 degrees Fahrenheit. It's so hot that molecules there are broken down into atomic hydrogen and helium, and the extreme conditions give it an albedo of just .064, making the planet's atmosphere even darker than asphalt.

The main reason for this, say researchers from McGill University and the University of Exeter, is the absence of clouds on the tidally-locked planet's day side. Condensation is normally quite reflective, but the sun-facing side of the planet is too hot for any to form. Instead, the light it receives from its star penetrates deep into the planet's interior, where it is absorbed by the atmosphere. The planet is so close to its star, in fact, that it's stretched into an oval by gravity, and is likely being slowly torn apart. The findings, published last week in the Astrophysical Journal Letters, come thanks to an imaging technique only applied once before to gas giants. The researchers used Hubble to grab pictures of Wasp-12b while it was eclipsed by its star, meaning that light fell on the planet head-on. They determined the planet's albedo by monitoring variations in the star's light, an indication of how much was reflected. This method was previously used to determine that the "hot Jupiter" planet, HD 189733b, reflects light concentrated on the blue end of the spectrum. That planet is much cooler and, as the imaging reveals, would look much different than Wasp-12b. That such disparities exist hints at the diversity of large gaseous planets out there, and should help researchers to figure out how differences in composition and location affect their formation and evolution.

Other dark planets have been discovered, but they are all much cooler and their sable appearance likely results from different conditions. Wasp-12b reveals an entirely different type of planet darkened by molecule-destroying heat. It's important to remember that it may not appear "black" at other wavelengths, though. The blistering temperature there means that it would shine brightly in infrared, and other factors could cause it to emit radiation in other parts of the electromagnetic spectrum. The work also rules out two previously suggested models for the planet's atmosphere, another indication that we have much to learn in terms of understanding these so-called "hot Jupiters." Those models were based on a different imaging method that looks only at how light passes through an exoplanet's atmosphere, as opposed to how it's reflected, and don't fully represent conditions on Wasp-12b. This is important because astronomers can only measure conditions on distant planets indirectly. This usually means watching how other things — like different wavelengths of light — interact with the planet. Depending on the method chosen, this could lead to divergent ideas about what a given planet looks like. Had astronomers not watched this planet during an eclipse, its inky black atmosphere would still be hidden from us.