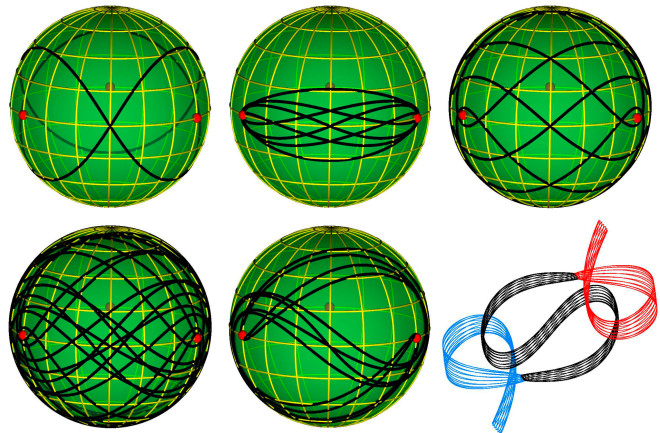 Since the days of Isaac Newton, physicists have sought to describe all the possible ways that three objects can orbit each other regularly in empty space. Solutions to the “three-body problem” could predict the dynamics of real-life planetary and stellar systems. It is also a fiendishly difficult mental puzzle: In more than 300 years, physicists had found only three solutions.

Then last year, using computer simulations of three objects in motion, physicists Milovan Šuvakov and Veljko Dmitrašinović from the Institute of Physics Belgrade found 13 new solutions. The researchers began by plotting hypothetical masses with specific locations and velocities, then simulated their possible orbits, looking for periodic orbits (ones that repeat). The simple-sounding procedure eventually yielded the new solutions (examples above).

If computer modeling proves such orbits are stable, it may be only a matter of time before astronomers discover these patterns among the stars.

[This article originally appeared in print as "Thirteen New Answers to an Age-Old Physics Puzzle."]