Think You Can Drive Fast Enough to Escape an Erupting Volcano? 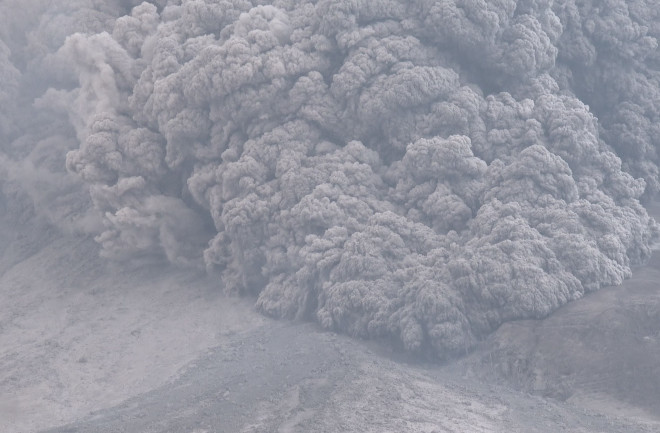 A massive pyroclastic flow from a 2014 eruption of Sinabung in Indonesia. James Reynolds, used by permission. Imagine being near a volcano when it unleashes a gigantic eruption. I'm not talking something fairly piddling like the 1980 eruption of Mount St. Helens or even the 1991 eruption of Pinatubo in the Philippines. I'm talking one of these eruptions that the tabloids and conspiracy websites say will destroy civilization, like Yellowstone or Toba. The common response is that everyone within hundreds of kilometers of the volcano would be killed almost instantly thanks to the fast moving pyroclastic flows that can rush outward from the caldera volcano for more than 150 kilometers (~100 miles). That idea is based on what we can see from these flows at smaller eruptions, where they race down the sides of the volcano at speeds over 500 kilometers per hour (300 mph). Cities like Pompeii and St. Pierre were wiped out mere moments after an eruption thanks to these avalanches of hot volcanic debris and ash. However, we've never been able to examine first-hand the results of a really giant eruption that puts Vesuvius and Pelée to shame. So, we need to look at the deposits left by such gargantuan events to figure out how they might be similar or different than their smaller brethren. Do the pyroclastic flows race out at the same speeds and are these flows the same mix of hot gasses and ash? The answer to those questions can help us better prepare for such an eruption and interpret the deposits left by these monsters in the past. A new study in Nature Communications by Olivier Roche (Université Blaise Pascal), D.C. Buesch (USGS) and Greg Valentine (University at Buffalo) has taken a stab at quantifying the speed of one of these massive eruptions and the results surprised me: Maybe we wouldn't be so doomed?

The Peach Springs Tuff (Arizona) sitting on top of a layer of the Cook Canyon Tuff in Arizona.

Roche and others looked at the Peach Springs Tuff, a massive volcanic deposit that erupted from the Silver Creek Caldera in Arizona about 18.8 million years ago. Now, the Peach Springs Tuff dwarfs most eruptions in the past few thousand years, with at least 1,300 cubic kilometers (or enough to cover all of Manhattan with almost 22 kilometers---~13.6 miles!---of volcanic debris). Deposits of the Peach Springs Tuff can be found over 170 kilometers (~105 miles) from the caldera and in those places, the deposits are still 10 meters (~30 feet) thick! This was an enormous eruption in an area where we don't tend to imagine super-eruptions occurring.

A photograph shows dark rocks embedded in layers of ash. The rocks were picked up and moved across the landscape by pyroclastic flows when the Silver Creek caldera, a supervolcano, erupted 18.8 million years ago.

The Peach Springs Tuff was big enough that the pyroclastic flows moved large pieces of rock (see above) that were lying on the ground before the eruption happened---kind of like how a stream picks up rocks and trees during a flood. By looking at the size and weight of these chunks of rocks, you can estimate the speed that the flow had to be moving if you make some assumptions about the flow itself. If it is mostly made of hot gases and tiny ash particles, then it can't move big rocks without moving really fast. If it has a lot of heavier grains of volcanic debris, then it can move big rocks at slower speeds because it has more strength. Additionally, the longer you apply that force, the greater your ability to move the rock. You can picture it this way: Try moving a bowling ball with just a fan for a minute, then try with a firefighter's hose for 10 minutes. The added density of the water from the hose means you can move that bowling ball easier at slower velocity of flow, especially if you have more time. So, Roche and others looked at the sizes of blocks picked up by and incorporated into the Peach Springs Tuff (see above). Now, they didn't move the full distance---that is, the 70 centimeter boulder found 150 kilometers from the caldera didn't move 150 kilometers. It might have only been moved 100 meters, but it was moved by the flow of volcanic material during the eruption. Now, even at distances as far as 140 kilometers (~88 miles), the Peach Springs Tuff was happily moving rocks that are 70 to 90 centimeters across (a few feet). That is an impressive feat! So, were they being moved by something thin and fast briefly or something thicker and slower for a longer duration? By modeling the force needed, Roche and others found that the blocks that far away couldn't have been moved by something thin and fast because it would have required speeds over 720 to 2,340 kilometers per hour (447-1454 mph), which is wildly unrealistic based on any known volcanic process. Even some of the fastest known pyroclastic flows observed, such as the blast at Mount St. Helens, was moving around ~600 kilometers per hour (370 mph). So, then what if the flow was dense instead? Roche and others ran experiments looking at miniature pyroclastic flows made of beads and sand to see how such flows could move larger particles. What they found is that such denser flows could move these large blocks at speeds closer to 18 to 72 kilometers per hour (11 to 44 mph). That is much slower than what we see at smaller eruptions, but for those smaller flows, we see what is happening within a few kilometers of the volcano. If the flow moves out 150+ kilometers, then maybe it can slow down but still have enough oomph to move block. What that would require is a constant push from the eruption itself. If the Silver Creek Caldera erupted for 2.5 to 10 hours at a sustained rate of 38 to 150 million cubic meters per second, then these flows could move blocks even moving at only a few tens of kilometers per hour. Now, that eruption rate is huge, tens to hundreds of times more than Pinatubo, Tambora or Novarupta, some of the biggest eruptions of the last few centuries. This means that the eruption of the Peach Springs Tuff was at least as large if not larger than the super-eruptions like Toba or Taupo. Yet, if you were 150 kilometers from the eruption, you might have upwards of 10 hours to get out of harm's way (well, at least out of the way of the massive pyroclastic flows---the resulting ash fall and climate cooling is a little trickier to handle). What does this all mean? Well, it means that cities near(ish) to large volcanoes like Yellowstone or the Campei Flegrei might have a fighting chance** to survive in the face of such a catastrophic eruption. Rapid and organized evacuation of cities might allow for people to leave in time, much like people can evacuate before a hurricane. However, that should be seen as a last resort. It is really careful volcano monitoring that can save lives most effectively, letting people know when they need to leave before they have to worry about a pyroclastic flow barreling towards them ... but it is nice to know that it might not be bearing down on you as fast as we thought. **Addendum (4:00 PM EST March 7): I wanted to clarify a few things after an email exchange with Dr. Valentine (from this study). First, it is clear that this study does not imply that evacuations can be effective in places like Naples near the Campei Flegrei after an eruption has started. Naples is far too close to have the finding of this study play any role. Remember, volcano monitoring and evacuation before the eruption is the best solution. Additionally, this study focussed on a single eruption from the Silver Creek caldera, so applying it to all very large eruptions is untested at this point.