The pair of stars known as V Sagittae is on a spiraling collision course whose explosive end we'll see by the end of the century, astronomers think. 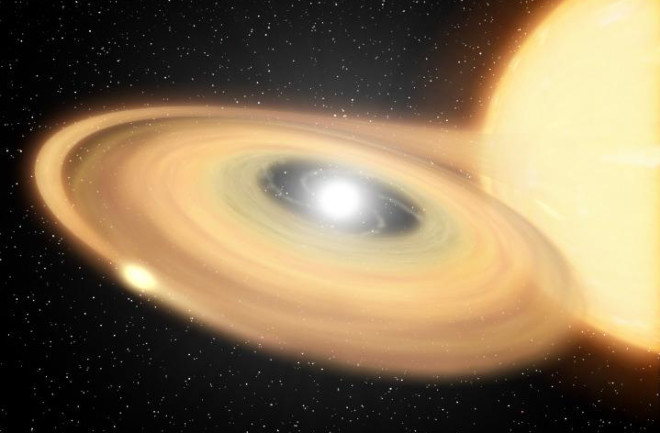 The binary star V Sagittae contains a white dwarf that stealing material from a larger companion star as the two spiral in toward each other. New research suggests the pair will merge by about 2083, which is expected to make V Sagittae one of the brightest stars in the night sky for about a month. (Credit: NASA/JPL-Caltech)

By the end of the 21st century, stargazers may witness a “new star” seem to appear in the constellation Sagitta the Arrow. Located roughly 7,800 light-years away, the two stars, collectively called V Sagittae, are spiraling closer and closer together. And as they twirl around each other, the larger star is dumping material onto its smaller, white dwarf companion. Ultimately, the two will collide and coalesce, creating a powerful burst of light that astronomers estimate will make V Sagittae the brightest star in the night sky for about a month.

By referring to an archive of observations dating back more than a century, a team of researchers recently determined the two stars in the V Sagittae system have been spiraling in toward each other at an ever-increasing rate. Currently, it takes about 12 hours for the stars to orbit each other once; but as they keep getting closer, the pair will continue to brighten. By the year 2083 — give or take 16 years — the researchers expect them to fully merge.

The researchers presented the finding Monday at the 235th Meeting of the American Astronomical Society in Honolulu.

The binary star system V Sagittae falls under the category of what astronomers call a cataclysmic variable. A white dwarf star and another star orbit each other, and the white dwarf pulls hydrogen from the tenuously held outer layers of its companion star. As the stolen material reaches the surface of the white dwarf, the intense gravity causes the hydrogen to ignite in a burst of nuclear fusion, which increases the brightness of the system.

“V Sagittae is one of the most extreme of cataclysmic variables,” said astronomer Bradley Schaefer of Louisiana State University during a press conference.

In most known cataclysmic variable systems, the companion star is either about the same mass as the white dwarf or less massive. But V Sagittae is an exception. Its companion star is about four times the mass of its white dwarf. This causes V Sagittae to shine about 100 times brighter than other cataclysmic variable systems, Schaefer said. The extreme mass ratio also makes the system blow off a lot of matter from the surfaces of the stars, a phenomenon that astronomers call stellar wind.

Schaefer and his team looked into the unusual system by digging into observations made on glass photographic plates dating back to 1890, as well as looking at more modern data. They found that V Sagittae has been getting brighter rapidly over the decades. Based on the stars’ masses, changing orbital properties and brightening rate, the researchers concluded that the pair of stars will merge and create a bright flash they dub a “merge burst.”

Their calculations suggest the merger should occur in about the year 2083, but uncertainties in their models mean it could occur as early as 2067 or as late as 2099. As they gather more measurements of how quickly the system is brightening, Schaefer said, they’ll be able to refine their estimate to a narrower window of time.

Within the lifetimes of some people living today, he said, a bright new star will light up the night sky, with the arrow of the constellation Sagitta pointing right at it.