These Might be the Spacesuits Astronauts Wear on Mars 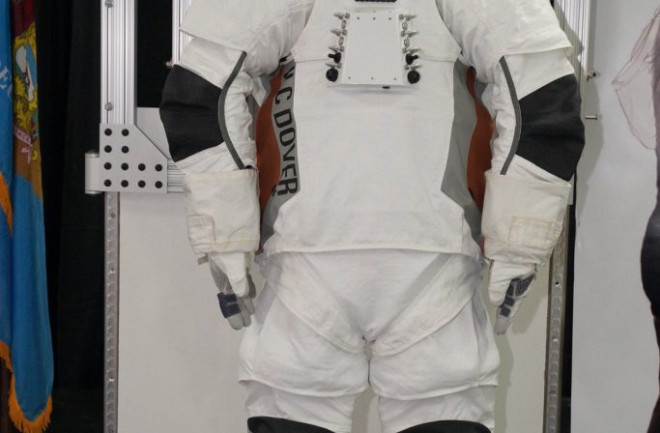 Fifty years after Neil Armstrong stepped on the moon wearing an ILC Dover-made spacesuit, the Delaware-based aerospace manufacturing company is coming out with two brand-new designs.

The company announced two new spacesuits on Aug. 28 called Astro and Sol. Unlike other suits the company has produced, like the extravehicular mobility unity (EMU) and the Apollo suit, these new spacesuits are built with adaptability in mind.

Astro is a spacesuit built for spacewalks and planetary exploration, while Sol is designed to be worn inside a spacecraft’s cabin during launches and landing.

Spacesuit fitting made headlines this summer when NASA cancelled its first all-female spacewalk. The two scheduled astronauts could not use the available spacesuits on the ISS without extensive configurations. The current design dates back to the 1970s, when astronauts were all men. The Astro suit is more easily configurable, and could help solve such logistical issues.

The spacesuit is also resizeable without tools, according to Dan Klopp, director of product marketing for ILC Dover. Not only does Astro allow for quick part swaps in orbit, he said, but “whomever is taking the suit to space [can] save volume and save weight in launching these things into orbit.” That’s because you can take one suit and modify it for different people, as opposed to taking several.

A Spacesuit for Another Planet

Astro also has accommodations in its design for free-floating spacewalks – where little lower-body mobility is needed – or for walking on future destinations, such as the moon or Mars. Previously, spacesuit designers had to choose between one design or the other. This includes a boot structure that can be modified depending on the terrain, the option of including better articulated joints and materials that can withstand the rigors of space or planetary exploration.

Astro also comes with better helmet visibility. Future explorers picking their way over uneven terrain will be able to see their feet, unlike the Apollo astronauts. The famous “hopping” gait astronauts adopted was in part to use their limited visibility as best as possible, Klopp said. But it was still an issue, with astronauts tripping over rocks and other equipment. During Apollo 16, astronaut John Young accidentally pulled a cable loose on a heat flow experiment with his feet.

Sol is meant for some of the most dangerous phases of an astronaut’s work: launching into space, and landing back on Earth. Like Astro, Sol uses highly articulated joints, a helmet with a large field of view and lightweight materials to keep astronauts comfortable.

Both Sol and Astro are well on their way to market, Klopp says. ILC is waiting for their customers to offer their unique specifications before proceeding, he says, and both could be ready within several months. For example, the Astro suit could work with both a tethered hose or a life-support backpack.