There's a Volcano Called Kick 'Em Jenny, and It's Angry 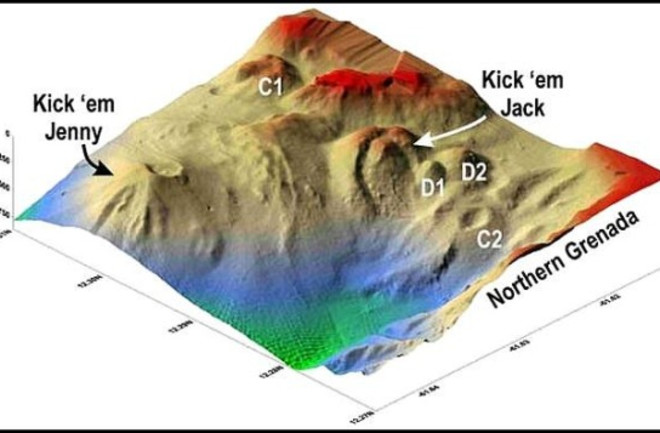 A bathymetric map of the seafloor off northern Grenada showing the volcanic cluster surrounding Kick' Em Jenny. NOAA and Seismic Research Institute, 2003 (published in GVN Bulletin). A submarine volcano near the coast of Grenada in the West Indies (Lesser Antilles) looks like it might be headed towards a new eruption. A new swarm of earthquakes has begun in the area of Kick 'Em Jenny (one of the best volcano names on Earth) and locals have noticed more bubbles in the ocean above the volcano (which reaches within ~180 meters of the surface). The intensity of this degassing and earthquake swarm is enough to have the volcano moved to "Orange" alert status by

Seismic Research Center at the University of the West Indies, meaning they expect an eruption soon. A 5 kilometer (3 mile) exclusion zone has also been set up for boat traffic around the volcano.

Kick 'Em Jenny doesn't pose a threat to Grenada itself enough though its only 8 kilometers from the island. The biggest hazard is to boats that frequent the area as the release of volcanic gases and debris into the water could heat up the water and make it tumultuous. In 1939, the volcano did also produce an eruption plume that breached the surface of the ocean, so there is a small chance that any new eruption could do the same. However, eruptions since 1939, including the most recent in 2001, have been minor and had no surface expression -- think of something like the 2010 eruptions at El Hierro in the Canary Islands. Robert Ballard has suggested that Kick 'Em Jenny could be potential threat to cause a tsunami that would impact the United States. However, there is little evidence that the volcano has ever produced a large enough explosive eruption to warrant such worry. A small debris avalanche deposit has been mapped in the submarine volcanic complex, but even that would cause a local tsunami that would be a danger to Grenada, but not likely the U.S. mainland. Research missions using submersibles at Kick 'Em Jenny showed an abundance of hydrothermal vents (and life) on the volcano.