There's a hole in the Moon! 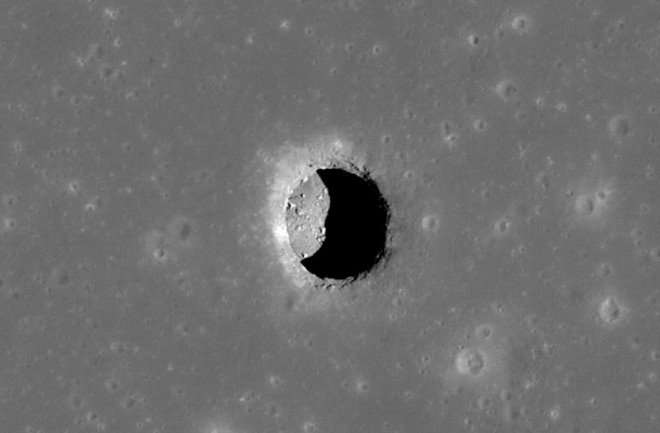 There’s a hole in the Moon!

I mean, seriously, there’s a hole in the Moon

Actually, it’s a pit, and there are several of these known in the lunar surface. I’ve even written about them before, but this shot from the Lunar Reconnaissance Orbiter is the best I’ve seen yet (and there are more at that link). You can clearly see the floor of the pit, with rubble strewn there, and the shadow gives it an excellent sense of relief (in fact, I have to laugh over how much the shadow looks like a little crescent Moon itself!).

These pits (or skylights as they’re sometimes called) form when lava flows over the surface of a world. The lava can carve a groove in the surface, and eventually the top of the lava flow solidifies even before the flow stops. When the lava flows away, you’re left with a tube under the surface, like a subway tunnel. At that point, the roof of the tube can collapse in spots; on Earth this is common in Hawaii and other volcanic spots. It happens on the Moon — perhaps there are seismic events, or nearby meteorite impacts — and we’ve even seen several on Mars, too. This one on the Moon is extraordinary. You can see the slope on the inside edge of the lip of the pit. Note the scale bar: this pit is about 100 meters across, the size of a football field! And the shadow tells scientists just how deep the pit is as well; the Sun angle when the shot was taken is known, so it’s just a matter of a little trig to get a depth of about 100 meters. Even in the Moon’s lower gravity, I wouldn’t recommend jumping in it: you might enjoy the 11 second fall, but you’d hit the bottom at 18 meters/second, or about 40 mph!

Still, these pits would be wonderful places to explore. The insides of the tubes would be very old, several billion years, and relatively untouched by solar wind and micrometeorite impacts. They’d be like a time capsule of the Moon’s surface all those eons ago.

Every time I see a picture from LRO, I am reminded that the Moon is more than a pretty disk in the sky, it’s an entire world with its own complex history. And it’s right next door.

We really need to go back.