The Whip-Like Physics of Fly Fishing

It's like pitching a cotton ball at major-league speeds: up to 600 feet per second. 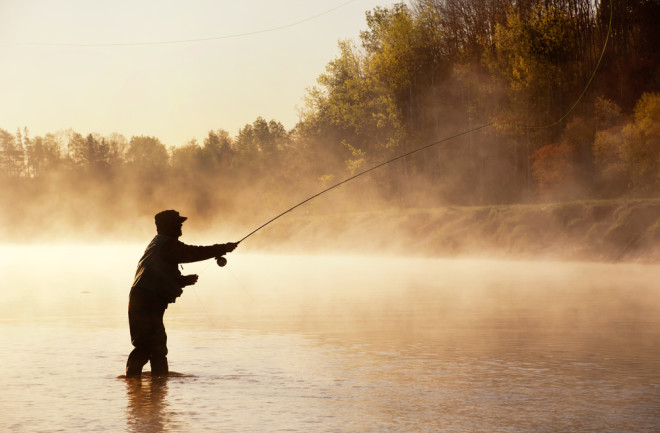 Joan Wulff handles a fishing rod with grace and explosive power. In 1960 she set the women’s unofficial world record for distance casting—an astonishing 161 feet. Now the grande dame of fly-fishing at age 81, Wulff has not lost her touch. Standing on the banks of the Beaverkill River near her fabled fishing school in New York’s Catskill Mountains, she raises and points the tip of an 8½-foot rod just over her shoulder, gives a sudden backward snap of the wrist and sends 40 feet of line sailing straight back behind her. As the line hangs in the air, she drops her arm down toward her waist. Then she launches the line forward, depositing a feathery fly silently out on the water exactly where she wanted it. “If you do it right,” Wulff says, “the fly shoots by your head like a bullet.”

While other fishermen lazily dangle bait in the water, fly-fishers sweat over strategy and technique, struggling to imitate with rods, lines, and lures the delicate landing of a fly on the river’s surface. To catch a fish, a fly-fisher sends out a wispy lure attached to an almost invisible 7- to 15-foot-long leader, which is in turn attached to a thicker and much longer braided line. The trick is launching the virtually weightless fly to a distant spot with deadeye accuracy. The thicker line must hit the water first, allowing the leader and fly to then gently alight upon the water just the way an insect might settle on a ripple, persuading the prey (trout and salmon, often, or perhaps a largemouth bass) to bite. “The point is to make it all look as natural as possible to the fish,” Wulff says.

Natural, of course, does not mean easy. In bait fishing, a sinker adds heft—and a fish-scaring splash—to a cast. In contrast, propelling an ultralight fly the way Wulff does is akin to pitching a cotton ball at major-league speeds. The only weight resides in the fishing line itself, which uncoils from a reel during the cast. The relatively small backward and forward motion of the fly rod sends the line streaking through the air as far as 236 feet, the current record.

Propelling a line and attached lure such a great distance requires deft control of the body’s ability to impart momentum—the product of an object’s mass and velocity—to the rod and line. During a cast, the fly-fisher achieves peak energy in the flick-of-the-wrist stage, which “gives you all the momentum you’re going to get,” says Jeff Kommers, a technical staff member at MIT. While working on his Ph.D., Kommers entertained classmates with his restless efforts to parse the physics behind the process. Following the moment of peak energy, the arm’s snapping force passes through the rod to the flexible tip, which then wiggles back and forth. This motion translates the force from the arm to the speed of the line and fly. Because momentum—created by the arm, absorbed by the rod, and passed into the thin fishing line—must be conserved, the tiny mass of the line achieves tremendous velocity, “especially at the end,” Kommers says.

Bullwhips operate under the same principle as the fly line: Energy travels from the arm to the thick end of the whip all the way down to the tapered tip, which accelerates wildly as the mass decreases. The characteristic crack of the whip results not from the tip’s snapping to the ground but from its literally breaking the sound barrier, producing a small sonic boom. “Obviously, fly-fishermen aren’t interested in making mini sonic booms when they try to catch fish,” Kommers says. Fortunately, the design of the leader and the fuzzy fly at the end of the line make that very hard to do. “The highest velocities I calculated were about 600 feet per second, quite a bit less than the speed of sound,” Kommers reports. And air drag typically keeps velocities much lower than that.