The Volcanoes of Nicaragua Sure Have Been Cranky This Year 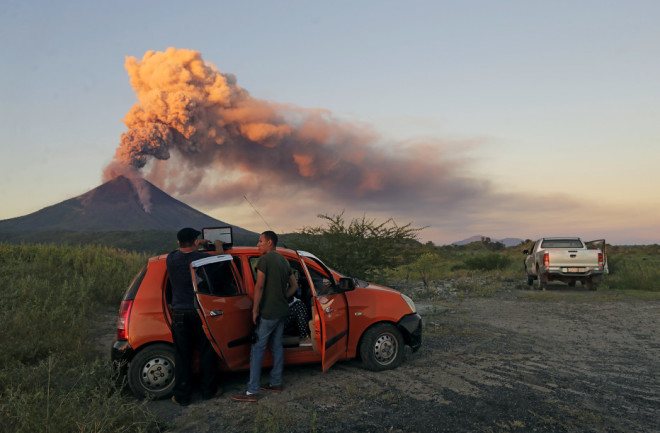 Momotombo volcano erupting in Papalonal community in La Paz Centro, Leon, Nicaragua on December 2, 2015. AFP/Getty Images Every year, there seems to be a country that is having more than its fair share of volcanic eruptions. This is the sort of thing that happens when you have a random distribution of volcanic eruptions over time (and space to some degree, along the areas that have volcanoes). This year, it is Nicaragua that seems to be the focus of eruptions---at least more so than usual. The biggest newsmaker is Momotombo, where the volcano has produced numerous explosive eruptions over the last few weeks, including some that have been quite spectacular (see above and below), sending ash as high as ~3.6 kilometers (12,000 feet). Some of the images of the eruption look downright Tolkienian, but really what is being seen in the night images is all the glowing volcanic debris covering the upper slopes of Momotombo. The eruption's main hazard has been ash falling on the area around Momotombo, so authorities in Nicaragua are maintaining a 6-km exclusion zone around the volcano. Over the past few days, the volcano has settled down some and currently is just emitting a thin steam-and-volcanic gas plume. You can watch the explosions live on some of the INETER webcams, including this one that has one of the best views of the volcano.

, where a lava lake has been present in the summit crater

for some time. Just the other day, a third vent opened in the summit crater

, possibly by the collapse of some of the crater floor. However, INETER does not anticipate Masaya being a threat

to Managua, ~23 kilometers away. When the viewing is good, it can be seen on the INETER webcam

has been producing some small explosions and a nearly constant plume

as well, with lava noticed at the summit

of the volcano. Meanwhile, San Cristóbal

has been experiencing some earthquakes

and small explosions this week

as well, but INETER does not think these are leading to any larger eruption in the near future---but you can still watch the crater on this webcam

has also had a minor bout of seismicity

, prompting a closure of the volcano to locals and tourists who might climb the volcano. Some media reports have expressed concern that these eruptions in Nicaragua are somehow directly connected

. Now, in a broad sense, they are connected as they are all part of the subduction

of the Cocos Plate underneath the Caribbean Plate

, where the Cocos Plate heats up, loses water and causes the mantle to melt, creating magma

. The magma then rises through the crust to erupt at volcanoes like Momotombo or Telica. However, these volcanoes

are not connected directly at shallow levels in the crust---that is to say, there is no "vat" of magma underneath all the volcanoes that is tapped at each volcano. They are separate magmatic systems that just happened to be active at the same time, something that hasn't happened in decades in Nicaragua.