The Tsunamis of Mars

The Red Planet was wet and wild. 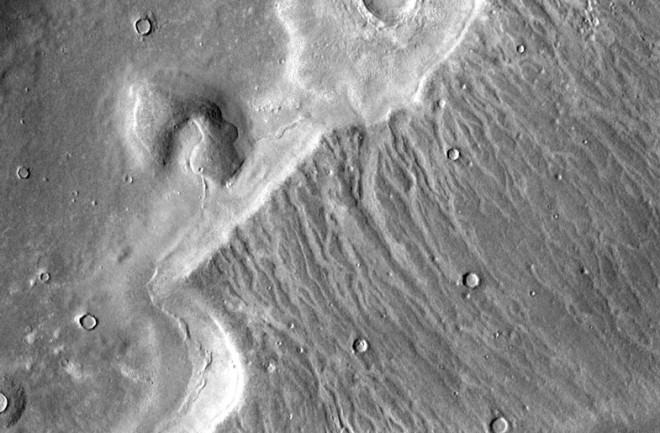 This image shows an ancient Martian coastline, where the impressions of tsunamis are still visible as faint ripples. | NASA/JPL/Malin Space Science Systems/ASU

Some 3.5 billion years ago, a meteor splashed into an ocean on northern Mars, creating a wall of water 400 feet high. The tsunami crashed down — in seemingly slow motion, due to the low gravity — and then rushed across hundreds of thousands of square miles of plains and up into highlands. It happened again a few million years later, except with a noticeably icier ocean. In a Scientific Reports paper published online in May, scientists said they had found evidence of the two events.

This image shows an ancient Martian coastline, where the impressions of tsunamis are still visible as faint ripples. | NASA/JPL/Malin Space Science Systems/ASU

The team, led by Alexis Rodriguez of the Planetary Science Institute in Arizona, looked at snapshots taken from three Mars orbiters. The researchers focused on the planet’s northern lowlands, where they observed the telltale signs of destruction: a washed-out coastline, rocks strewn across valleys and mountains, and channels carved by water rushing back into the ocean. Everything matched up with simulations already completed by another group in 2014.

While scientists still debate whether Mars even had an ocean at the right place and time, Rodriguez says that tsunamis — rather than wind or glaciers — are the only explanation for these geologic features.