The Truth is Out There: Using VERITAS to Search for E.T. 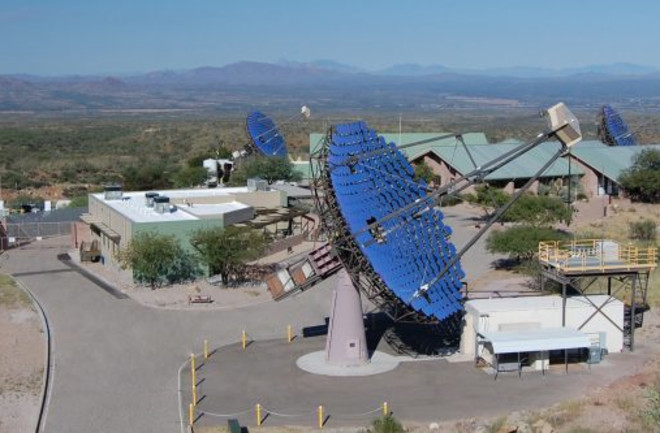 The four VERITAS telescopes in Arizona will soon be used to hunt for alien communications. (Credit: The VERITAS Collaboration)

Traditionally, the hunt for intelligent life in the universe has focused on radio signals from far off worlds. But scientists are turning to more varied types of signals, acknowledging that we have very little idea how a truly alien life-form might choose to communicate, either with themselves or us.

With that in mind, Breakthrough Listen, a program searching for signs of life in the universe, is partnering with the VERITAS (Very Energetic Radiation Imaging Telescope Array System) observatory in Arizona to look for pulses of light that might be a sign of alien intelligence. Usually, VERITAS searches the sky for gamma-ray sources, but scientists are using its multiple telescopes and sharp sight to look for even more elusive targets.

“When it comes to intelligent life beyond Earth, we don’t know where it exists or how it communicates,” Breakthrough founder Yuri Milner said in a press release. “So, our philosophy is to look in as many places, and in as many ways, as we can. VERITAS expands our range of observation even further.”

Breakthrough Listen also searches the skies at more traditional radio ranges, listening for signs of alien communication. And the project has looked for other signs of laser transmissions. Many searches focus on ensuring that observations cover as much of the sky across as much time as possible, so they don’t miss any potential calls from E.T. But increasingly, scientists have come to think that the ways they look for extraterrestrial life are at least as – if not more – important than broadening any individual search.

And this won’t be the first time VERITAS has joined in the alien hunt. In 2016, scientists used archival data from the array to look at Tabby’s Star, a star with peculiar fluctuations that some postulated could be due to alien construction interfering with the star’s light.

VERITAS is a collection of four telescopes, each 40 feet across, that look for faint flashes of light. The special light they usually search for is called Cherenkov radiation, formed when high-energy gamma-ray photons slam into Earth’s atmosphere, forming the optical version of a sonic boom. The gamma rays don’t typically make it through the atmosphere, but by searching for the flashes of visible Cherenkov radiation – which last only a few billionths of a second – VERITAS can tell where the gamma rays are striking Earth, and trace them back to their sources.

The Breakthrough Initiative wants to use VERITAS’ large telescopes and quadruple vision to look for faint pulses of optical light that might originate from alien communications. While humans typically still use radio for space communication, NASA has also used optical laser signals to send data in space, so there’s reason to think aliens might use such technology for their own purposes. The most powerful Earth lasers could deliver about 500 terawatts in just a fraction of a second. And because Breakthrough prioritizes nearby stars in its target list, VERITAS should be able to see signals from a civilization using bursts of light some 100-10,000 times fainter.

No one knows exactly how aliens might communicate with humans or even among themselves, if they even exist. But by searching in as many ways as possible, scientists can keep looking for signs that there’s anyone else out there.