The Tiny Satellites That Might Fly to Another Solar System

Scientists hope the world’s smallest satellites will boldly go where no probe has gone before. 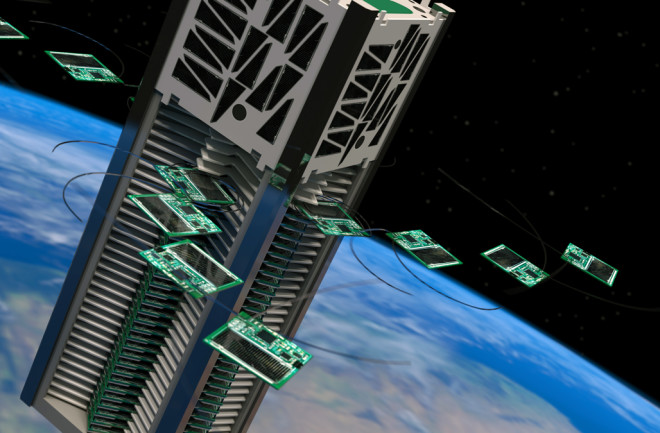 During an interview at a Boston- area café, Zac Manchester apologized for not bringing along a copy of his latest satellite — one of many duplicates due to enter orbit this fall during a mission to the International Space Station. “Don’t worry,” says Manchester, a Stanford University professor of aeronautics and astronautics. “I’ll put one in an envelope and mail it to you.”

Even a small envelope would suffice, given that Manchester has created the tiniest satellite yet. The Sprite, as it’s called, weighs just 4 grams and measures less than 2 square inches — roughly the size and weight of a standard sugar packet.

Such diminutive spacecraft, assembled from off-the-shelf components at a cost of about $25 apiece, could play a big role in future space exploration, Manchester says. They may even represent our best chance of getting a human-made device to a star other than the sun. An upcoming ISS mission should show him just how close we already are.

Manchester started working on the project in 2009, shortly after he began graduate studies at Cornell University, following up on earlier work by his adviser Mason Peck and fellow graduate student Justin Atchison. By early 2011, he had already produced some preliminary versions of the Sprite. When a last-minute spot opened up on a space shuttle flight that year, he and Peck managed to get their experiment to the ISS. Astronauts mounted three of the devices to the outside of the space station during a space walk. Three years later, all were still working, proving the electronics could withstand the harsh space environment.

Manchester’s Sprites went on to fly on the hulls of the Latvian-German Venta 1 satellite and the Italian-German Max Valier satellite, which launched into low-Earth orbit in June 2017. The Sprites are still attached to their host satellites today, having demonstrated they can harness solar energy and successfully communicate with ground stations.

The next big challenge is to get Sprites flying freely in space, where they can talk with each other and with Earth-based command posts. The first attempt came in April 2014, with the launch of around 120 Sprites aboard a shoebox-sized satellite called KickSat-1 — so named because Manchester financed the mission through a crowdfunded KickStarter campaign.

But the Sprites’ release had to wait more than two weeks because of a NASA request to keep the area clear for a Russian Soyuz launch. After that delay, KickSat-1 failed to discharge its Sprites because of an electrical problem likely caused by exposure to radiation. As a result, the whole spacecraft burned up during atmospheric re-entry without having released the Sprites.

Hopes now rest on KickSat-2, another shoebox-sized craft set to launch in November from NASA’s Wallops Flight Facility in Virginia. It took Manchester more than four years to try again because of difficulties securing a Federal Communications Commission (FCC) license, required to communicate with ground facilities in the United States. The FCC was also concerned about orbital debris and the ability to detect the minute spacecraft, which can be difficult to track.

“That has posed a problem for the entire small-satellite research community,” says Manchester. He managed to skirt this issue by handing over responsibility for the mission to NASA Ames Research Center, for whom he had previously worked.

Once KickSat-2 enters its prescribed orbit, Manchester and his team can issue commands from the ground to release its roughly 100 Sprites from a spinning container, so that they’ll naturally spread out in space. “They’ll fly for a few days to a couple of weeks, at most, before they burn up, which makes for a short-lived experiment,” he says.

Along with large light sails, Sprites could be part of an ambitious plan to send a spacecraft to the nearest exoplanet within 20 years. Breakthrough Initiative

The mission’s primary goal is to establish communications among the minute satellites through an approach called mesh networking, which involves passing messages to nearby satellites so that information eventually propagates to all the Sprites. Although it’s a standard technique on Earth, it has never been done in space.

Secondary goals will be to test the Sprites’ positioning and navigational abilities, such as determining the distance between individual satellites by sending radio signals and measuring the transit times. “All of these steps are building blocks toward enabling large-scale spacecraft swarms to act collectively,” Manchester says.

The Future Is Now

Although KickSat-2 is meant to be a technology demonstration project, Manchester is eager to start doing actual science, too. The swarms of low-cost, disposable flying objects could perform tasks that no single spacecraft can do on its own.

He’s already teamed up with Harvard University astronomer Blakesley Burkhart, devising a plan to deploy a separate swarm of small satellites to survey the sky in the low-frequency radio range. These observations cannot be done from the ground, Burkhart explains, because Earth’s ionosphere interferes with those frequencies. Such radio waves also have huge wavelengths, in the tens and hundreds of meters, so observations could require a telescope a few kilometers across, Manchester estimates. If researchers can overcome a few minor bugs, an array made up of Sprites could perform the job of a giant telescope at a much lower cost. “This truly is the last frontier for radio astronomy,” Burkhart says.

Sprites are also key to another ambitious endeavor, Breakthrough Starshot. Its goal is to launch a squadron of the tiny probes in about 20 years to the Alpha Centauri star system, 4.3 light-years away. These Sprites would likely be equipped with super-lightweight, lens-free cameras 100,000 times smaller than conventional cameras because, Manchester notes, “it’s all on a chip.”

He’s already looking forward to one photo in particular, taken as his satellites race by at 20 percent the speed of light: a snapshot of the planet Proxima Centauri B. The picture he has in mind is something like the famous Pale Blue Dot photographs of Earth taken by the Voyager 1 space probe in 1990 as it started leaving the solar system.

“I’m hopeful that in a few decades, we’ll get a picture like this,” Manchester says, “not looking back at Earth, but looking toward a new Earth.”

[This article originally appeared in print as "A Sprite-ly Spacecraft"]