The surprisingly toxic world of lichens 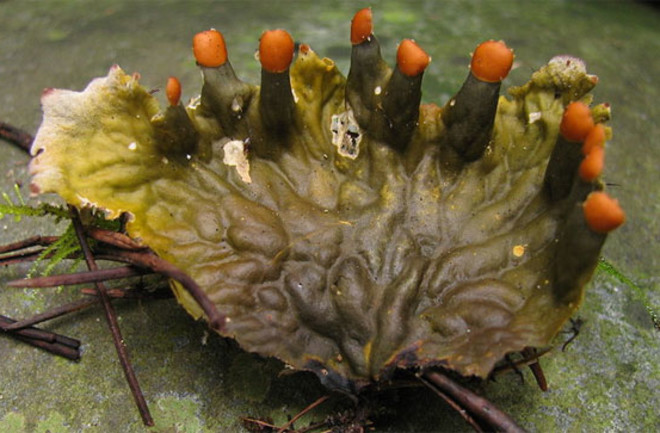 Peltigera membranacea - one of the species analysed in this study

One of the most successful alliances in the natural world often goes unnoticed. It involves either an alga or a bacterium that harvests energy from the sun to make its own nutrients. It shares this bounty with a fungus, which reciprocates by providing it with shelter. Together, the associates form a dual organism known as a lichen.

This alliance is so successful that lichens have colonised every continent, including Antarctica. They’re often ignored, but look closely, and you’ll find a hidden world of jellies, bushes, worms and pixie cups. Look even closer, and you’ll find a world of poison.

Ulla Kaasalainen from the University of Helsinki has discovered that one in eight species of lichens wield microcystins, a group of poisons that cause liver damage in humans and other animals. These chemicals are manufactured by blue-green bacteria known as cyanobacteria. These microbes are best known for creating large ‘blooms’ in lakes and rivers, which discolour the water with greenish swirls, and poison it with harmful toxins like microcystins. These toxins can accumulate in the food chain, affecting humans via shellfish and fish.

But such poisons aren’t restricted to the water. Cyanobacteria are often found in lichen partnerships. In 2004, Finnish scientists led by Kaarina Sivonen found that the most common of these species – a bacterium called Nostoc – produces microcystins.

That discovery was not a one-off. The team has since sampled 803 lichen species from around the world. They found mycE – a gene that makes microcystins – in 98 of them, and traces of the actual chemicals in 42. Some species had negligible amounts, but others had up to 0.2 milligrams for every gram of lichen. For comparison, the World Health Organisation recommends that levels of microcystins in drinking water should be no more than 0.001 milligrams per litre.

The chemicals themselves were incredibly varied. Kaasalainen found 52 different varieties of microcystins, many of which had hardly ever been seen before. She also found 30 distinct varieties of the mycE gene.

The evolutionary relationships of the cyanobacteria, as revealed by their copies of mycE, don’t quite match that of their fungal partners. This means that the partnerships haven’t always evolved in tandem; cyanobacteria must have occasionally hopped from one fungus to another distantly related one. Indeed, the lichens may have provided cyanobacteria with an evolutionary platform from which to diversify into many new forms. After all, we know that Nostoc strains in lichens are far more diverse than those that grow on their own.

It’s often said that there are only a few types of poisonous lichen. Wolf lichen is one of them, and has been used to stuff reindeer carcasses in order to poison scavenging wolves and foxes. But Kaasalainen’s study suggests that poisonous lichens may be more widespread than we realised.

These poisons may protect the lichens from grazing mouths. Certainly, many animals eat lichens, including snails, voles, squirrels and snub-nosed monkeys. In winter, they are an important source of food for reindeer, which avoid the ones containing poisonous cyanobacteria.

Humans sometimes eat lichens too, and some species are used in Asian traditional medicines. In fact, one of the specimens that Kassalainen analysed came from a traditional medicine practitioner in China’s Hunan provide. That sample didn’t contain any microcystins, but an identical one from the same region did. Kassalainen suggests that the health risks of lichens, if any, are currently unclear, and will stay that way without more research.