The Strong Magnetic Field Around Our Galaxy's Black Hole 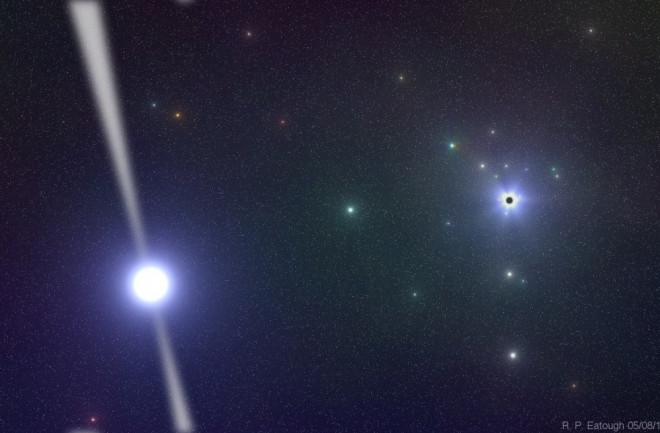 A Special Kind of Star

The star in question, named PSR J1745-2900, is a rare breed of star. When a massive star dies, it can collapse in on itself, resulting in a smaller star made almost entirely of neutrons. When spinning neutron stars emit beams of radiation from their poles, they’re called pulsars (short for pulsating stars) because of the “blinking” appearance of the star in our skies — think of how a lighthouse only appears to light up when the beam hits your eyes. And certain pulsars have extremely strong magnetic fields, about 100,000 billion times stronger than Earth’s field; these are called magnetars. PSR J1745-2900 is a neutron star, and a pulsar, and a magnetar. It also happens to be really close, within a light-year, of the object at the center of the Milky Way named Sagittarius A*, almost certainly a supermassive black hole. That’s fantastic news for astronomers, who’ve been looking for a pulsar near Sgr A* for 20 years, because of the insights it would give them on the area’s magnetic fields. Since they pulse at such regular intervals, pulsars are known as cosmic clocks, making them extremely important objects, capable of providing a means to measure the properties of space and time around it. They provide a kind of constant baseline against which interesting phenomena can be accurately plotted. (Pulsars are so distinctive, scientists included a “map” of 14 of them on the Pioneer 10 and 11 probes that pinpoints where and when the spacecraft launched from, so any extraterrestrials who happened upon the probes could find Earth.)

This past spring, astronomers discovered PSR J1745-2900, and after making absolutely certain that they really had finally found a pulsar near Sgr A*, they began figuring out what the star has to say about the black hole. A paper in this week’s edition ofNature details how they discovered that a surprisingly strong, large scale magnetic field infuses the area around Sgr A*. That magnetic field affects the dynamics and flow patterns governing how the black hole gobbles down, or accretes, its meals of hot gas. The strong magnetic field could be slowing down the accretion process, meaning less hot gas for the hungry black hole. This, in turn, could answer some of the questions astronomers have about radiation coming from Sgr A*, as well as explain why the black hole appears to be less active than other galaxies' central black holes. It’s still unclear why it took so long to find a pulsar in the black hole’s vicinity, but now that scientists have, they plan to take full advantage, making further observations as this pulsar slowly orbits Sgr A*. With luck, they might even be able to find more pulsars, which would help refine these measurements of our local black hole.