The Strangest (and Second-Strangest) Star in the Galaxy 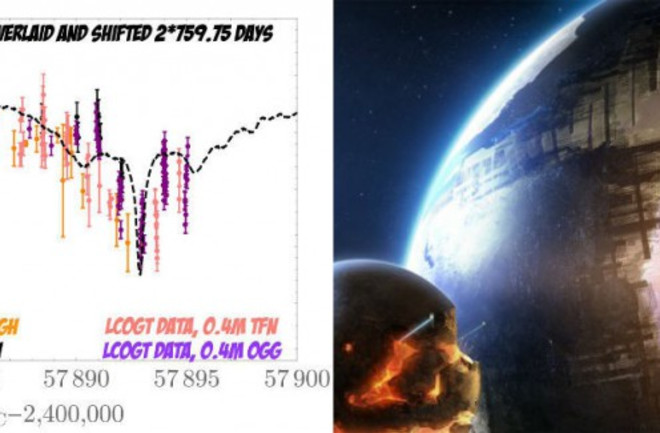 Two ways to look at Tabby's Star: as intriguing data, or as an invitation to flights of fancy. (Credit: David Kipping, left; FantasyWallpapers.com, right) There’s an old saying: "Great discoveries don’t begin with ‘eureka!’; they begin with ‘that’s funny…’" I’ve long attributed the quote to the renowned science popularizer Isaac Asimov. Jason Wright gently corrects me. He has researched the line, he explains, and could find no evidence that Asimov ever spoke or wrote those words. It was a tidy encapsulation of what Wright is about. He is attracted to the peculiar side of science, and he is also a relentless sleuth. Wright, an astronomer at Penn State, is one of the lead researchers investigating the decidedly peculiar flickering object commonly known as Tabby's Star or, in the popular press, as the "alien megastructure star." The star's behavior is so puzzling that Wright included among the possible explanations that a huge construction project is orbiting around it. (Note that he never suggested aliens were the best explanation, merely that the hypothesis could not yet be ruled out.) Lately Tabby's Star has been acting up again, providing intriguing new data but, so far, still no definitive answers. While Tabby's Star continues to vex and excite the astronomical community, Wright is busy thinking about other puzzles as well. I was particularly intrigued by another misbehaving star, by the mouthy name of Przybylski’s Star (pronounced "jebilskee," roughly). If Tabby's Star is the most mysterious star in our galaxy--an epithet endorsed by Tabetha Boyajian, who first described the star's irregularities--then Przybylski’s Star may qualify as the second-most strange and mysterious star around. In this case, the puzzle is the star's composition, which appears to be filled with radioactive actinides, short-lived elements normally found only in nuclear experiments on Earth. I'm a sucker for unexplained scientific anomalies, so I caught up with Wright to hear his thoughts on these astronomical outliers. What follows is an edited version of our conversation. [For astronomy updates, follow me on Twitter: @coreyspowell] Tell me about Przybylski’s Star: What is it that makes this object so unusual? Its spectrum is extremely peculiar. Everyone who’s seen it says it’s the strangest stellar spectrum they’ve ever seen. It’s got an abundance pattern that is very hard to understand. In terms of exactly what abundances of what elements it’s showing us, I don’t know. Some people say there are so many lines you really can’t tell what you’re looking at. [Lines in a star's spectrum are used to identify its chemical composition.] But, they have to be the lines of some elements! And that’s what people try to figure out. Some of those elements appear to be short-lived radioactive isotopes, which makes no sense; such atomic nuclei should long ago have decayed and vanished. How can that be? The identification of short-lived isotopes seems like it must be wrong, because there’s no way to generate them. There is one clever way to hypothesize how they could be generated, however. [The hypothesis is that Przybylski’s Star contains as-yet undiscovered ultraheavy elements, which then decay into the short-lived byproducts we see.] It takes short-lived actinides being in there from being impossible to not totally impossible. The spectroscopic evidence points toward the short-lived nucleotides really being there. Our standard model for stars implies that the observation is probably wrong. But there's a small possibility that some really cool nuclear physics is going on in this star. There's another even further-out possibility, that intelligent aliens put the radioactive elements in there as a kind of chemical signpost... Carl Sagan and Iosef Shklovskii, along with Frank Drake, had raised the idea of looking for radioactive elements like promethium in stars as a possible alien signal. I found that sort of silly; why would aliens dump their promethium in stars? What would the point be? To get our attention, I guess, but I think there are easier ways to get our attention. It's neat that somebody said, Hey we should look for it, and then somebody else found something that seems to match what they predicted. But I wouldn’t put alien technology on a serious list of things that might be going on with Przybylski’s Star. [

Note: I fixed a transcribing error in the original version of this passage. For more on the Sagan/Shklovskii idea, see Wright's blog post

Jason Wright really enjoys a cracking good astronomical puzzle. (Credit: J. Wright) How do you make progress understanding an object that seems to exist in a category of one? Przybylski’s Star is not entirely alone. It's the most peculiar of peculiar A stars [white-hot stars, brighter and more massive than our sun]. Other A stars are also peculiar, so it does seem to be part of a family. Like Tabby’s Star, it’s telling us that there are some phenomena out there that we just don’t have a good handle on yet. It means we’re missing something important somewhere, and that’s neat. When you find the anomalies, whatever the answer is it’s interesting. There are a lot of anomalies that get swept aside with a ‘who cares?’ There’s a triple-star system found by the Kepler space telescope. At least, the pattern of light dips looks a lot like it’s a triple star system of some kind, but no one’s been able to figure out what the three stars are doing. It’s called “the impossible triple.” People just throw their hands up and say, we’re just not clever enough to figure out exactly what we’re seeing. It’s probably just something ordinary we haven’t thought of yet. The peculiar A stars felt like that to me for a while: curious and but who know why. But if the island of stability [hypothetical ultra-heavy, quasi-stable elements] might be involved, that feels like a high enough reward that it’s worth investigating. Nobody has yet figured out how to generate those elements on Earth. If they are just sitting there in Przybylski’s Star, presumably we could study them there, in a way that’s hard to study them here in the lab. These stars turn out to be a natural laboratory for something really interesting. Or it could all be a mistake! And what about the more famous mystery star, Tabby's Star? What's the latest there? Telescopes are taking data of the star every day; Tabby [Boyajian] is really in charge of that. Everybody is observing, including AAVSO and the Fairborne Observatory. We just want to catch more of those 10 percent dimming events, and when it happens gather lots and lots of spectra of it as it dips. [Latest updates here.] We’re looking for spectral changes: When the star is getting dimmer, is that because something is in front of it? If it’s because something’s in front of the star, we want spectra in case it’s absorbing certain wavelengths—that would tell us what it’s made of—and we want to know how much dimmer it is in different wavelengths over time. SWIFT can measure the ultraviolet emission, Las Cumbres and other ground-based observatories can measure optical, Spitzer can measure infrared. Put all that together and we should be able to put a picture together of what we’re looking at! Everyone wants to know what is making the star flicker. Comets, gas cloud, black hole, aliens. How will we tell? If diffuse material is passing in front of the star, then it will leave spectral fingerprints [as the light goes through]. We’ll take spectra and look for the usual suspects: hydrogen, sodium, magnesium, the elements that have the strongest fingerprints that we expect to see. If it’s dust, we expect the dips to be deeper in the blue than they are in the red. In blue light or ultraviolet light it will get very dim, and in red or infrared it will hardly get dimmer at all. If the star gets dimmer the same at all wavelengths, that means we are looking through something very optically thick, meaning that light doesn’t penetrate at any wavelengths. That could be a thick disk with some well-defined edge where we don’t see any diffuse part of it blocking the star. If it’s the star itself getting dimmer, then we’ll expect to see changes in the spectral features of the star as it gets cooler or smaller or whatever it is doing.

What if you don’t see any obvious spectral changes?

Hmmm…I don’t know! If Tabby's star just gets dimmer but the spectrum doesn’t change, that would be quite a puzzle! You’d have to think of a very dense annulus or something. Right now we’re waiting to see where the data take us. From a SETI perspective, if the spectrum didn’t change but the whole thing got dimmer, that would suggest a large opaque object. But that still wouldn’t prove it. You drew up a provocative list of potential explanations for Tabby's star. How do you evaluate what is plausible and implausible when you are dealing with such an unusual object? We admitted that our list was subjective. You can only do it subjectively. We were trying to stay open minded. One way to do it is to count unicorns. How many unicorns do you have to invoke [to make your explanation work]? There are all those horses out there, and maybe one is a unicorn. Maybe you are allowed one. But once you invoke three of them, your answer becomes so contrived that you look for other explanations. Basically we were counting unicorns. For each explanation, how many crazy things would have to be tricking us? What draws you to scientific oddballs like Tabby's Star and Przybylski’s Star? I like puzzles that not a lot of people are working on. Peculiar A stars were once a hot topic, but there’s a whole younger generation of astronomers who’ve never even heard about them. I thought it was neat to pick it up again and show just how bizarre these things are, and hopefully get some people thinking about it. And indeed, I’ve discovered a few younger astronomers who have recently rediscovered them and are working on them. That’s neat.