The Standard Model: The Physics Theory of (Mostly) Everything

A theory of mostly everything. 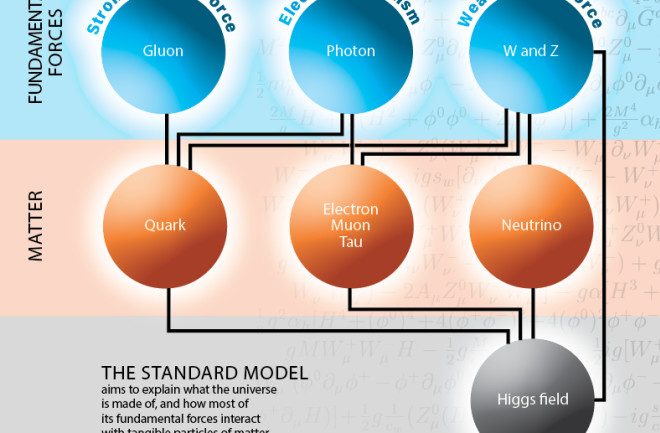 The math that describes nature can be simple, even elegant. Consider Einstein’s beloved E = mc2. A mere three letters tell us that matter and energy are, essentially, the same. Heisenberg’s uncertainty principle, which sets limits on what we can know about reality at small scales, fits neatly on a coffee mug.

And then there’s the Standard Model. This sprawling equation fills half a page in 12-point type. It’s held together by “renormalization” — the mathematical equivalent of duct tape — and contains a bunch of arbitrary numbers with no pattern, filled in by hand to fit the results of experiments. It’s an awkward theory only a physicist could love.

But beauty isn’t everything. For all its ungainliness, the Standard Model just happens to be the best theory ever devised for answering a question humans have been asking for millennia: What is the universe made of?

“There’s a degree of ugliness to the Standard Model,” says Nobel laureate Steven Weinberg, one of its architects. “But I think an elegant theory is one which leaves you with a sense that something has been explained, and we’ve made real progress in explaining nature using the Standard Model.”

You may have heard that matter is, at its smallest scales, made of tiny dots — electrons and such — called particles. According to the Standard Model, you weren’t told the whole truth.

“Particles are not very interesting,” says Weinberg. “If you’ve seen one electron, you’ve seen them all.”

Particles arise from something even more fundamental: fields. Fields are invisible and everywhere. You’ve encountered fields before, the last time you tried to push two magnets together. That uncanny pressure you felt came from magnetic fields pushing back. Fields behave like liquids and can ripple, like the surface of an ocean. When they form a wave, a particle is born.

In the 1940s, physicists put the finishing touches on a theory that cast the electromagnetic force as quantum fields: quantum electrodynamics (QED). It suggested that every electron is a ripple in the same electron field, and every particle of light is a ripple in a photon field.

Ripples in one field can, like a gust of wind that creates waves in a lake, set off ripples in the other field. Understanding how electron and photon fields play together can explain not only the electromagnetic force and the interaction of charged particles, but also how light interacts with matter. It may sound crazy, but QED has passed every test with flying colors.

The Four Fundamental Forces and Their Fields:

Gravity is missing from the Standard Model.

The Building Blocks of Matter:

Quarks are found in atomic nuclei and experience all four fundamental forces.

Electrons (and their cousins the cosmic-ray muon and the supermassive tau particle) ignore the strong nuclear force.

Neutrinos barely interact with the rest of the material universe because they experience only the weak nuclear force.

The Higgs field interacts with all the building blocks of matter; it gives them their mass.

The creators of the Standard Model extended QED by tacking on fields for other forces: the strong nuclear force (which binds the pieces of an atom’s nucleus together) and the weak nuclear force (which describes how atoms fall apart and give off radiation). These fields have their own particles.

The Standard Model also added a slew of fields responsible for the particles that actually make up matter, including the quarks that comprise the nuclei of atoms, and neutrinos, which barely interact with other matter.

The most famous prediction of the Standard Model today may be the existence of the Higgs boson. Have you heard that this particle, first spotted inside the Large Hadron Collider in 2012, gives mass to other particles? You were misled.

The Higgs field is the mass giver. It rubs elbows with the fields of particles that have mass (particles of matter, as well as the W and Z bosons responsible for the weak nuclear force field), but not with fields associated with massless particles (like the photon).

For all its successes, though, the Standard Model is not complete. Why the Higgs field gives different particles different masses remains a mystery. The model also has nothing to say about the dark matter and dark energy thought to exist out in the cosmos. Perhaps most strikingly, it leaves out one of nature’s four forces entirely — gravity. The Standard Model can’t explain how gravity works, or why it’s so much weaker than the other three forces.

Some researchers have been trying (unsuccessfully) to add even more fields that could solve some of the problems of the Standard Model, an idea called supersymmetry. Others believe that fields may be made of something even more fundamental — tiny vibrating strings — but testing string theory has been problematic.

“We all agree that there has to be something beyond the Standard Model, but we don’t know what that something is,” says Weinberg. For now, this ugly theory is the best we have.