The Soviet Rovers that Died on Mars 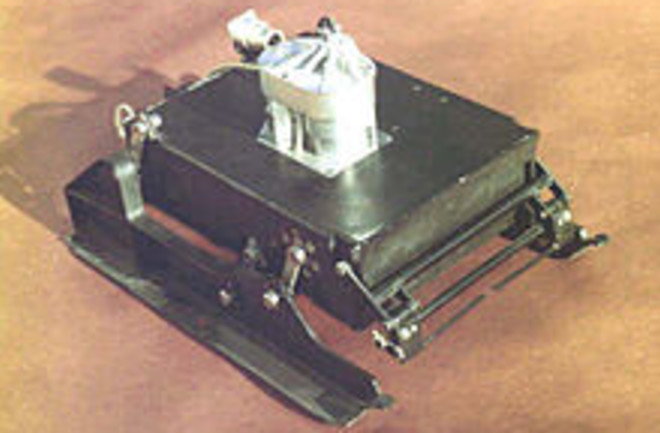 The Prop M rover. via NASA

Mars 2 and Mars 3 were twin missions launched to the Red Planet in 1971, May 19 and May 28 respectively. Both were landers designed such that petals protecting the payload would open after touchdown, exposing a suite of instruments to the Martian environment. Each also carried a tiny rover on board, the Prop M rovers.

The Prop Ms were tiny, weighing just 10 pounds on Earth so a little under 4 pounds in Mars' weaker gravity. It's body was a squat little box supported on skis, two flat board hinged from the side of the rover that gave its underside a small amount of clearance from the surface. It was also a design inspired by harsh Russian winters (and a lack of detailed knowledge of Mars' surface environment) were snow makes skiing a more effective method of transportation than walking. The rovers weren't designed to rover per se, they were designed to shuffle, ski in front of ski, to slowly traverse the surface.

And they weren't designed to get far. After a manipulator arm lifted them off the lander and placed them on the surface, the Prop Ms could only go as far as a 50-foot (15 meter) cable would allow them. Even though they were tethered, the little rovers had some autonomy. Each had a pair of bars on their front end that acted like a rudimentary hazard avoidance system. If one of the bars hit something like a rock, it would depress, signaling to the rover to turn away from the obstacle.

All the while the little rovers would be watched by the landers cameras, the proxy for technicians on Earth. The lander would take a picture of the rover every five feet to see just how the rover disturbed the surface material.

Unfortunately neither Prop M ever reached the surface. Mars 2 made an unsuccessful landing on November 27, 1971; it crashed. Mars 3 landed successfully a few days later on December 2, and it actually sent back the first ever picture from the Martian surface... a mess of pixels but pixels sent from Mars. Then after just 14 seconds of operations it went quiet and never woke back up.

For a look at how they worked (courtesy of my not so brilliant animation skills) check out the companion video on Vintage Space!