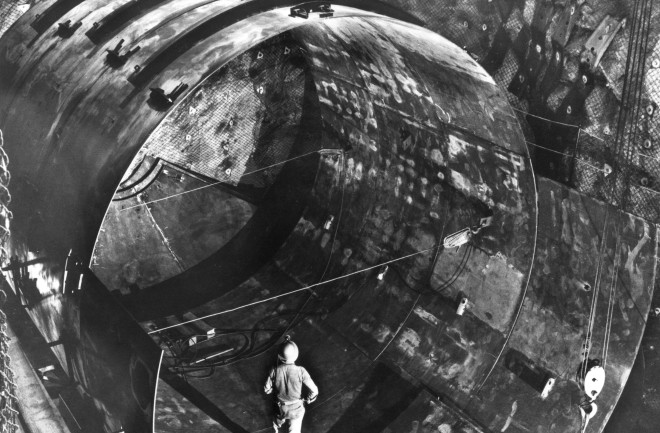 Construction of the neutrino detector inside the Homestake Mine in South Dakota. (Credit: Brookhaven National Lab) Back in 1938, physicist Hans Bethe figured out that the Sun and other stars generate energy by fusing hydrogen into helium. With that mystery solved, solar scientists thought they had a pretty good understanding of what was going on at the heart of the sun. But an experiment that started in 1967 made astronomers just a tad uneasy. While it takes sunlight just eight minutes to travel to Earth, the energy generated in our star’s core needs tens or hundreds of thousands of years to meander to its surface. So, observations of sunlight today give researchers a picture of what was going on in the interior long ago. So, half a century ago, American chemist and physicist Raymond Davis decided to find out what’s happening inside our star in the present day. Bethe’s original equations had shown that nuclear reactions in the sun’s core give birth to neutrinos, subatomic particles so elusive they rarely interact with matter and thus exit the sun without delay. That prompted Davis to build a neutrino collector — a tank holding 100,000 gallons of cleaning fluid — nearly a mile underground in South Dakota’s Homestake mine. Calculations predicted that of the 10 million billion neutrinos passing through the tank every day, roughly one would interact with a chlorine atom and change it to argon. But the detector, operated all the way until 1994, recorded only about one-third the expected number of neutrinos. This so-called solar neutrino problem stumped astronomers and had some questioning how well we knew the Sun. Part of the solution came from a relatively nearby supernova, called supernova 1987A, which erupted into Earth’s skies in 1987. As light from the supernova reached Earth, neutrino detectors also caught some of these ghost particles from the explosion. Their findings also added evidence that neutrinos might have some mass, contradicting some previous theories. This added weight to the idea that neutrinos came in different flavors, or types — and could even change types on their way to Earth. A later experiment done using the Solar Neutrino Observatory, located underground in Sudbury, Ontario, proved this was in the fact the case. Just one-third of solar neutrinos made it to Earth in a form Davis could have detected. The solution netted its discoverers the 2002 Nobel Prize in physics. A version of this story originally appeared in Astronomy's September 2016 issue.