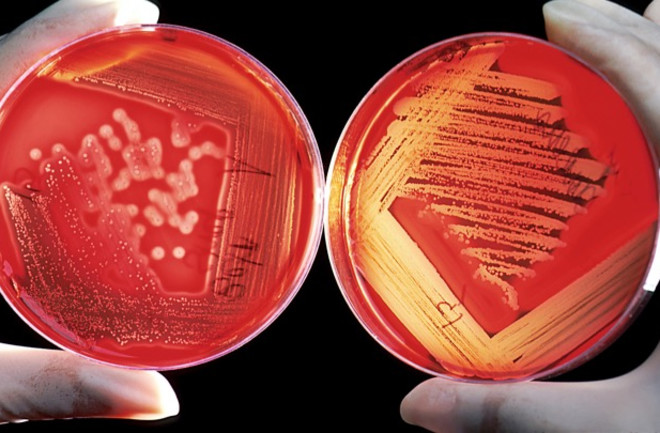 Growing microbes on nutrient-rich plates, as is done in most microbiology laboratories, may not be representative of real-world conditions. (Image: NIH) For decades, thousands of researchers around the world have spent their professional careers studying the inner workings of microorganisms - their genetic predispositions, their responses to different conditions, their rates of growth and activity. But what if the premise was all wrong? Lab-based work almost always involves single species studies done in rich medium that enables exponential growth, where doubling rates are limited not by food or specific nutrients but by the organism’s inner workings. But clearly this accelerated growth state is not representative of microbes in the real world, where competition and resource scarcity set growth limits. In a recent article for Nature Reviews Microbiology, Megan Bergkessel and colleagues point out this discrepancy and try to bridge the gap of traditional culture-based and environmental microbiology. Some nuance: the long tradition of culture-based microbiological study is foundational to our understanding of life on the molecular and cellular scales. Yet the phenomena observed in these carefully controlled, resource rich experiments fail to reflect the reality of nearly all life on Earth. Bergkessel highlights this point with a simple back-of-the-envelope calculation, noting that a single cell of E. coli – the lab rat of microbiology – if grown continuously in exponential phase, would balloon to a population with a mass of the entire Earth in just two days. So what are we missing by neglecting life under growth-arrested conditions? One key strategy for persistence is to re-route metabolism in a way that simultaneously produces energy and minimizes upkeep costs – the microbial equivalent of selling your house and moving to an apartment in lean times. Lipid molecules in the cell membrane are frequently the first to go, a mode of self-cannibalism that generates “generic” carbon intermediates which can be used to put out the most concerning fire of the moment. This downsizing also increases the cell’s surface area-to-volume ratio, and may bolster its ability to find and acquire food in a depleted environment. Under oxygen-limited conditions, some species get creative by short-circuiting canonical pathways and exporting energetically juicy intermediates. The root cause of “suffocation” in oxygen-deficient situations doesn’t really have much to do with the oxygen molecule itself, but rather its functional role as an electron sink. Electron-rich NADH molecules build up in the cell, and with no electron acceptor (a role typically played by oxygen) things grind to a halt. Two steps of the tricarboxylic acid (TCA) cycle – a wheel of central metabolism that pumps out energy-rich molecules in the best of times – account for much of this NADH. By skipping those steps (and moving directly from isocitrate to succinate, for those of you keeping score at home), fewer electron-rich molecules are made and there’s less backlog. And while oxygen is the most energetically appealing electron acceptor, it’s not the only game in town. Succinate can also play the part, so after the TCA cycle is trimmed, some of the resulting succinate is exported and used as an electron sink. To maintain electronic balance, protons are also moved across the membrane, re-forming the proton gradient that drives ATP production. It’s not ideal, but this re-routing of TCA cycle metabolism kills two birds with one stone by minimizing the concentration of electron-rich molecules and providing another out, using succinate as an electron acceptor. Clearly, life under low-growth conditions is a distinct way of being, and one that is more reflective of how most biological entities function. With the intellectual heritage of single-organism, exponential phase microbiology as our guide, we are beginning to develop a more realistic sense of microbial existence, studying life not as we shape it in the lab, but as it is in the real world.